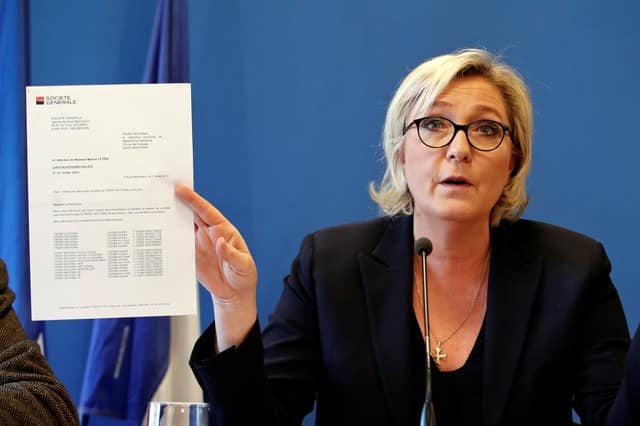 Marine Le Pen, head of France's far-right National Front (FN) political party, shows a letter from the Societe Generale bank during a news conference at the party headquarters in Nanterre near Paris

French far-right leader Marine Le Pen accused banks on Wednesday of closing accounts that belong to her and her party, saying she has been the victim of a “banking fatwa” meant to silence her National Front.

The 49-year-old is smarting from defeat in presidential and parliamentary elections this year, during which she already accused French banks of being politically biased for not giving loans to finance her campaigns.

“This is an attempt to suffocate an opposition party and no democrat should accept that,” Le Pen told a news conference, calling on President Emmanuel Macron and other political parties to back the National Front.

The FN says Societe Generale closed its accounts in November and that when the central bank ordered a subsidiary, Credit du Nord, to manage an account for the party, the bank refused to process cheque and credit card payments.

Societe Generale and HSBC both said they could not comment due to banking confidentiality rules. Neither has confirmed or denied closing FN accounts or those of Le Pen.

In France, banks are allowed to decide to close accounts with advance notice, and do not have to say why. But holding an account is a right and a customer can ask the Bank of France to designate a bank that would be forced to open one. The designated bank can choose to limit the use of the account to basic banking services.

The FN spent €12.5 million on the presidential election alone.

Party supporters have since been asked in an online campaign to directly lend it money.

Few politicians have commented on the FN’s banking woes. Mael de Calan, a contender for theleadership of the Republicans, a conservative party, told BFM TV he was shocked a bank would ask a political party to close its accounts.