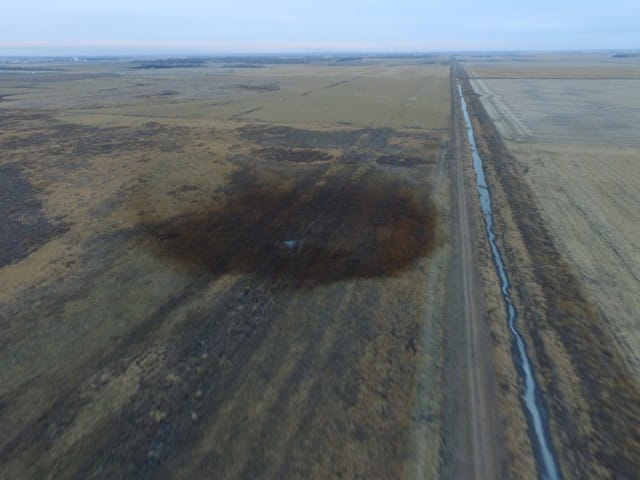 TransCanada Corp’s existing Keystone pipeline has leaked substantially more oil, and more often, in the United States than indicated in risk assessments the company provided to regulators before the project began operating in 2010, according to documents reviewed by Reuters.

The Canadian company is now seeking to expand the pipeline system linking Alberta’s oil fields to US refineries with its proposed Keystone XL project, which has US President Donald Trump‘s backing.

The existing 2,147-mile (3,455 km) Keystone system from Hardisty, Alberta, to the Texas coast has had three significant leaks in the United States since it began operating in 2010, including a 5,000-barrel spill this month in rural South Dakota, and two others, each about 400 barrels, in South Dakota in 2016 and North Dakota in 2011.

Before constructing the pipeline, TransCanada provided a spill risk assessment to regulators that estimated the chance of a leak of more than 50 barrels to be “not more than once every seven to 11 years over the entire length of the pipeline in the United States,” according to its South Dakota operating permit.

For South Dakota alone, where the line has leaked twice, the estimate was for a “spill no more than once every 41 years.”

The spill risk analysis was conducted by global risk management company DNV GL. A spokesman for DNV did not respond to a request for comment.

Members of South Dakota’s Public Utilities Commission told Reuters last week they could revoke TransCanada’s operating permit if an initial probe of last week’s spill shows it violated the terms of the license.

Those terms include requirements for standards for construction, regular inspections of pipeline infrastructure, and other environmental safeguards.

“They testified that this is going to be a state-of-the-art pipeline,” said one of the commissioners, Gary Hanson. “We want to know the pipeline is going to operate in a fashion that is safe and reliable. So far it’s not going well.”

TransCanada shut a section of the line while it cleans up the leak, which occurred near the town of Aberdeen on Nov 16. An official did not respond to a request for comment.

The spill took place days before regulators in neighboring Nebraska approved a route for TransCanada’s proposed Keystone XL pipeline through the state, lifting the last major regulatory hurdle for the expansion that has been delayed for years by environmental opposition.

Trump handed TransCanada a presidential permit for Keystone XL in March, reversing former President Barack Obama’s decision to reject the line on economic and environmental grounds, saying that it would create jobs and boost national security.

TransCanada’s spill analysis for Keystone XL, which would cross Montana, South Dakota and Nebraska, estimates 2.2 leaks per decade with half of those at volumes of 3 barrels or less. It estimated that spills exceeding 1,000 barrels would occur at a rate of once per century.

Fake news, the scourge of our times, conference told