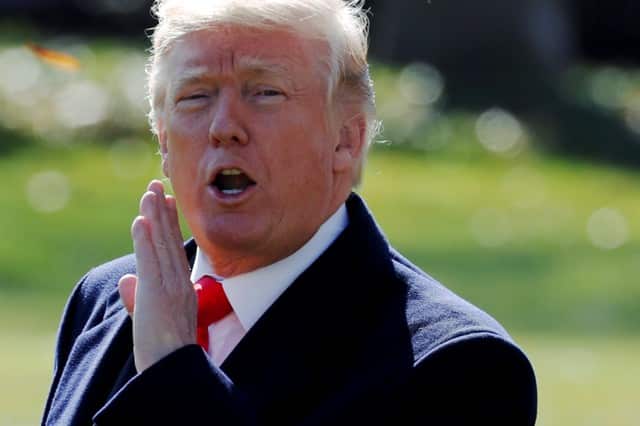 US President Donald Trump sparked outrage in Britain’s political establishment on Thursday with a sharp rebuke of Prime Minister Theresa May on Twitter after she criticised him for retweeting British far-right anti-Islam videos.

As British politicians lined up to condemn Trump for sharing videos originally posted by a leader of a British far-right fringe group, Trump, in an unprecedented attack on one of America’s closest allies, replied with an unrepentant message.

“Theresa @theresamay, don’t focus on me, focus on the destructive Radical Islamic Terrorism that is taking place within the United Kingdom. We are doing just fine,” he tweeted.

His truculent response caused anger in Britain, where there have been several major Islamist militant attacks this year, with one minister describing Trump’s tweets as “alarming and despairing”.

London’s mayor, a Muslim, said May should withdraw an offer of a state visit to Britain which has already been extended.

Trump provoked a wave of anger and disgust from politicians in Britain and human rights groups in the United States when he shared anti-Muslim videos posted by Jayda Fransen, deputy leader of the group Britain First.

May criticised him, her spokesman saying: “It is wrong for the president to have done this.”

Fransen, who was convicted this month of abusing a Muslim woman and whose group wants to ban Islam, is facing further criminal charges of racially aggravated harassment.

Islamist militants have carried out several major attacks in Britain this year that have killed a total of 36 people, including a bombing in Manchester and two attacks on bridges in London in which victims were rammed with vehicles and stabbed.

May was on a trip to the Middle East and has not directly responded herself to Trump’s barbed tweet. She was expected to speak to media in Jordan later on Thursday.

Always a pillar of Britain’s foreign policy, the so-called “special relationship” with Washington has taken on added importance as Britain prepares to leave the European Union in 2019. Since Trump became president, May has gone out of her way to cultivate a good relationship with him.

She was the first foreign leader to visit him after his inauguration, and they were filmed emerging from the White House holding hands.

She later said that Trump took her hand in a gentlemanly gesture as they walked down a ramp.

But she angered Trump’s many critics in Britain then by extending an invitation to make a state visit to Britain with all the pomp and pageantry it brings including a formal banquet with Queen Elizabeth.

Despite repeated calls from opposition lawmakers to cancel this, Rudd said the invitation still stood although a timing had not been agreed. She also said the close US-British relationship which allowed the intelligence agencies to share information was vital and had saved lives.

Brendan Cox, the husband of lawmaker Jo Cox who was murdered in 2016 by a far-right extremist and Justin Welby, the spiritual head of the Anglican Church, were among those expressing outrage at Trump’s latest tweet.

Lawmakers from the across the political divide were also united in condemnation.

“By sharing it, he is either a racist, incompetent or unthinking, or all three,” opposition Labour lawmaker Stephen Doughty said. Britain’s Middle East minister Alistair Burt tweeted: “The White House tweets are both alarming and despairing tonight. This is so not where the world needs to go.”

The videos shared by Trump purported to show a group of people who were Muslims beating a teenage boy to death, battering a boy on crutches and destroying a Christian statue.

Reuters was unable to verify the videos. The Dutch embassy in Washington issued a Twitter comment on one of them, which Fransen had described as showing a “Muslim migrant” beating up a boy.

“@realDonald Trump Facts do matter. The perpetrator of the violent act in this video was born and raised in the Netherlands,” the embassy said. “He received and completed his sentence under Dutch law.”

London’s Muslim mayor Sadiq Khan, who has been embroiled in previous Twitter spats with Trump, called for the state visit offer to be withdrawn. “After this latest incident, it is increasingly clear that any official visit at all from President Trump to Britain would not be welcomed,” he said on Twitter.

Britain First, a little-known party on the periphery of UK politics, welcomed Trump’s retweeting of the videos to his 44 million followers, regarding it as an endorsement of their message.

“I’m delighted,” said Fransen, whose own Twitter following increase by almost 50 per cent in the wake of the furore to 77,000. She told Reuters Trump’s retweets showed the president shared her aim of raising awareness of “issues such as Islam”.

The White House defended the retweets by the Republican president, who during the 2016 US election campaign called for “a total and complete shutdown of Muslims entering the United States”, saying that he was raising security issues.

It repeatedly refused to be drawn into the content of the videos or whether Trump was aware of the source of the tweets.

“It’s about ensuring that individuals who come into the United States don’t pose a public safety or terrorism threat,” White House spokesman Raj Shah told reporters aboard Air Force One.