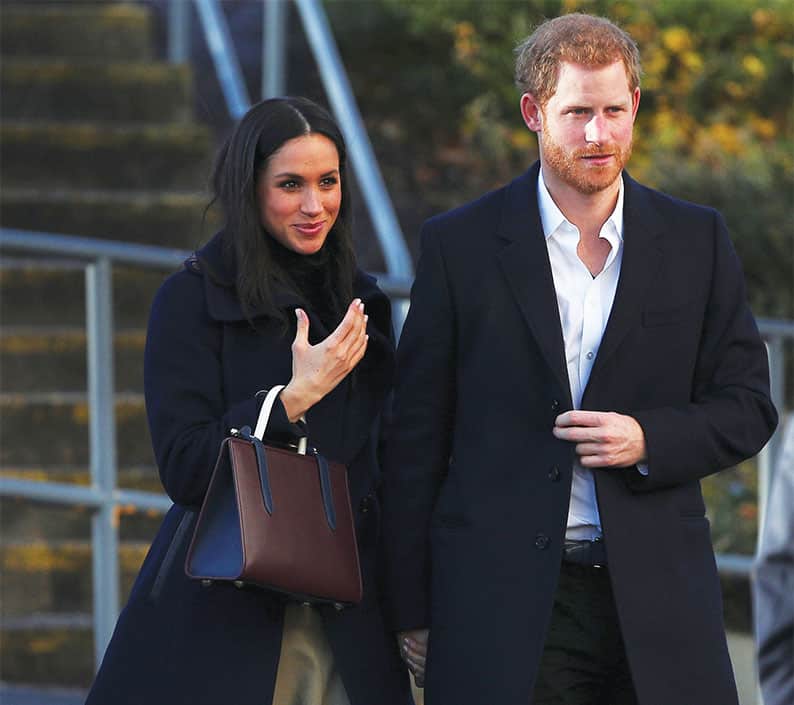 In the film Zorba the Greek there is a rather amusing exchange between the English writer Basil and Alexis Zorbas:

“Are you married Zorba?”

“Am I married! Am I not a man? Is a man not stupid? I am a man, so I married, wife, children, house, everything the full catastrophe!”

Well, yes, and forty per cent of marriages in Britain end in divorce, but whatever reservations there may be about marriage as an institution, judging by the reaction of people to the news that there is going to be a royal wedding, the world still welcomes love at first sight and is thrilled at the prospect of a girl marrying her prince.

Prince Harry and Meghan Markle announced they are engaged to be married last Monday. She is a feminist American actress of mixed ethnic heritage and a divorcee. He is the youngest son of his divorced parents Charles, Prince of Wales and Princess Diana, and fifth in line to the throne. He is a captain in the British Army and, as is the tradition among British royals, saw active service despite his royal status.

He proposed in a cottage kitchen while cooking roast chicken – no alliteration intended – ignoring Oscar Wilde’s famous dictum that ‘in matters of great importance style, not sincerity, is the vital thing.’

But he made up for his eccentric choice of place and circumstance when he slipped a diamond ring on Meghan’s finger – partly chosen from Princess Diana’s diamond collection.

They will tie the knot at St George’s Chapel at Windsor. It will be a state occasion. He will wear a uniform appropriate to his royal rank; but it is a bold man who dares guess the shade and style of the wedding dress before the bride reveals it as she steps out of the wedding carriage.

In accordance with tradition she will arrive fashionably late and repeat all his middle names during the handover at the altar; Diana muddled through lots of royal middle names when she married Charles in 1981.

It will be a memorable occasion the like of which Britain will not experience again until Prince George decides to pop the question many years from now.

Meghan’s African heritage has captured the imagination of black women round Britain and America.

Meghan’s mother is African American and her father is Dutch Irish. She is proud and vocal about her mixed heritage. I too am proud and enjoy being Turkish and Greek – and with a British education and culture to boot. Children of mixed parents have identity issues but they pale compared to the advantages of having parents from diverse cultures.

Meghan said she was sometimes thrown when confronted with having to tick boxes asking if she was Caucasian, Black or Other. When she asked her father how to cope he nailed the conundrum: make your own box and tick it he advised.

Of course there is racism, inequality and discrimination in Britain but these blots are institutionally deprecated these days and Prince Harry and his fiancée, as members of the institution at the apex of British society, have done a great service to the cause of racial integration.

The royal families of Europe used to marry for dynastic reasons rather than love. Observe the uncanny similarity in appearance of the queen’s cousin, Prince Michael of Kent and Tsar Nicholas II – killed with the rest of the Russian royal family in 1917 – and you realise how interrelated they all were. Kaiser Wilhelm II of Germany was Queen Victoria’s grandson; and she is the great great grandmother of both Prince Philip and Queen Elizabeth II, Prince Harry’s grandparents.

Yet despite the royal family’s links with foreign royals and minor princelings the British love their royals and their royal weddings and royal births – and respect royal deaths. The proclamation, the king is dead long live the king, is the best guarantee of a smooth transition from one reign to the next that has percolated down to a smooth transition from one government to the next as if it were a changing of the guard, which is literally and metaphorically what it is.

There are sound reasons for this deference to the royals, which paradoxically is because of, rather than in spite of, their German roots. The royal family is not linked to German minor royalty by accident. After the Glorious Revolution of 1688 when Britain became a constitutional monarchy with a Bill of Rights limiting arbitrary rule by divine right, Catholics were forbidden from succeeding to the British throne by the Act of Settlement of 1701 that made express provision for a Protestant succession to the British throne.

Martin Luther began the Protestant Reformation in 1547 that inspired the European wars of religion between states that ended with the Peace of Westphalia in 1648. As a result, lots of Protestant dukes, princes and other minor monarchs from Germany became ripe for plucking.

And so it was that when Queen Anne died in 1714 the Protestant Prince George of Hanover was chosen to succeed Queen Anne even though under the laws of primogeniture he was 50th in line to the British throne.

Fast forward to 2017 and you have the reason why Meghan, who is Catholic, will have to convert and become a Protestant. It is in the Act of Settlement of 1701. Prince Harry is 5th in line to the throne, so Meghan will have to convert away from Catholicism. As Dr Ian Paisley used to shout: No Pope here!

I jest of course, but the Act of Settlement is a constitutional law and as such is to be treated with the utmost respect – some laws are more equal than others even though one parliament cannot bind another. The idea of a constitutional monarchy has existed for a long time in Britain. It evolved over the centuries and has been refined to take account of changes in society thus avoiding the upheavals of revolutionary change in continental Europe and beyond.

Nowadays constitutional monarchy comprises two pillars of government that make freedom and democracy work rather well in Britain. Paraphrasing from Walter Bagehot’s The English Constitution, they are the dignified parts – those which excite and preserve the reverence of the population; and the efficient parts – the rules by which it works. Every constitution must first gain authority, and then use authority. It must first win the loyalty and confidence of the people, and use that confidence in the work of government.

Royal weddings and royal births and other more functional royal occasions like the state opening of parliament and the queen’s speech and the prime minister’s weekly audience at the palace and the lion and unicorn of the Royal Arms that sit above all HM judges in every court in the land, are all the dignified parts of constitutional monarchy. To repeat from Oscar Wilde: in matters of great importance style is vital.

If you take away dignity and style the whole edifice may collapse whereas a mild incremental step forward toward a multi-racial monarchy will enrich Britain at home and abroad.

Dramatic shifts in the balance of Middle East power

Beyond the hype, the hazards of electric vehicles