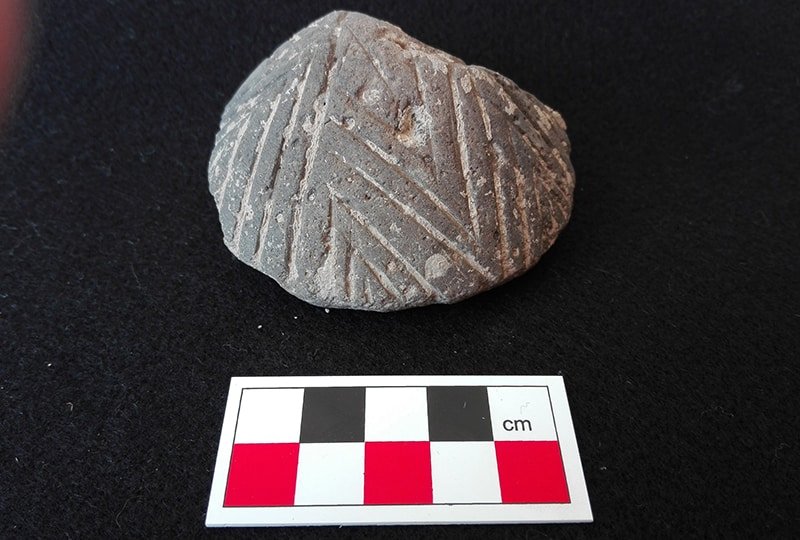 During this season’s excavations at the multi-period site of Prastio-Mesorotsos in the Paphos district a number of shallow pits were found many containing broken objects placed in a ritualistic manner, including stone vessels, human remains and a fragment of an anthropomorphic clay figurine.

The discovery of a rare stone-shaped engraved object confirmed that the site was in use during the Aceramic Neolithic period. These engraved stone objects have also been found in the neighbouring location of Choletria-Ortos, Choirokitia and Lebanon. Although their use has not yet been established, these objects reveal contact between Cyprus and inhabitants of other coasts at a time when the island’s special Neolithic culture is thought to have been developed.

The discoveries were announced by the department of antiquities on Monday at the completion of this year’s archeological investigations at the site. The expedition is a yearly project under the direction of Andrew McCarthy, Fellow of the School of History, Classics and Archaeology at the University of Edinburgh, and the Cyprus American Archaeological Research Institute (CAARI).

The archaeological site is situated around the valley of the Diarizos river with spectacular views of both the mountains and the sea. The location of the settlement and its easy access to a variety of raw materials are elements that appear to have contributed to its longevity. During the 10th excavation period, the research team conducted excavations in four areas revealing remains dated to the Neolithic, Chalcolithic, Early and Middle Bronze Age.

In previous seasons the team discovered a series of Early Bronze Age roundhouses, unusual for the period, which show a continuity from the preceding Late Chalcolithic period. A significant architectural and social change seems to have occurred near the end of the Early Bronze Age and the start of the Middle Bronze Age.

The remains of the Bronze Age continue to show that in the Early Bronze Age the inhabitants adapted past habits of the Chalcolithic period and gradually adopted new practices in the Bronze Age.
The most significant changes, however, were noted in the civilization and society between the Early and Middle Bronze Age when the whole settlement changed from a small, open-air village to a more organised settlement with terraces.

In the excavation area are remains of these terraces in good condition where a wall seems to have had a height of up to two floors. This helps to understand how the settlement would have looked like during the Middle Bronze Age shortly before its inhabitants abandoned it: a village built on various levels with dense terraces and walls that would look particularly high to somebody approaching from the river.