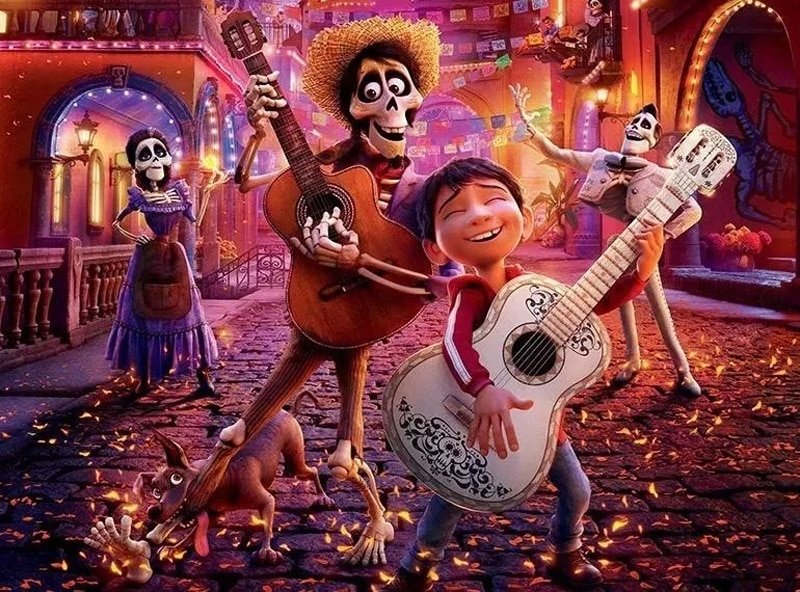 Coco is an intelligent, meaningful fiesta of colour, emotional depth and inspired creativity; whisking Pixar back to their heyday (remember the charm of Ratatouille and Wall-E?). By successfully bridging the sombre issue of life and death with panache, sensitivity and authenticity, this stunning animation owes its greatness to a multi-level format based on a heart-tugging script, dimensional characters and fantastical animations that entertain and challenge.

The story revolves around 12-year-old Miguel Rivera (Anthony Gonzalez,) a budding guitarist seeking to follow in the footsteps of his idol Ernesto de la Cruz (Benjamin Bratt) – the legendary musician and film star. However, due to an ancestral scandal, a musical ban has been passed down the generations of his close-knit Mexican family so Miguel must hide his love for music, performing in secret to his one and only fan; a street dog he’s named Dante. To realise his musical destiny, Miguel must defy his determined family and step out into society, showing everyone his true talent. Here, a world he had never believed existed opens up to him as he embarks on an unlikely adventure in the colourful world of the afterlife, searching for his unknown scapegoat great, great grandfather. And so, a visually succulent story expands, twisting and turning between the gates of earth and the afterlife, with hilarious guest appearances by Frida Kahlo’s skeleton and other such spirited characters.

Coco, named after Miguel’s adorably wrinkled great grandmother offers laughter, tears and even inspiration through an honest tribute to family and culture, while engaging adults and children alike without patronising either. Additionally, with the help of a well-plotted script, an all star Latin cast and the first non-white human Pixar protagonist, Pixar sure has gone and done good!

The story is set in Mexico on Día de Muertos celebrations (the Day of the Dead), a Mexican holiday focusing on remembering deceased family and helping them on their spiritual journey onwards. Following a run in with his fierce but loving Abuelita/grandmother (Renee Victor), which leads to his guitar in tatters, a sad but unshaken Miguel decides to sign up to the town’s talent show, but without a guitar he sneaks into Ernesto’s mausoleum to borrow the star’s prized guitar. Here, something magical happens sending him traveling into the land of the dead and back, to set things right: Like in Back to the Future, Miguel needs to make things good with his ancestors, so he can return home.

Miguel bumps into his feisty ancestors, attends lavish parties, partakes in afterlife music competitions and meets numerous fun characters including the ‘down on his luck but lovable’ Hector (Gael Garcia Bernal). In Coco, the world of the dead is similar to that of the living, just bigger, brighter and better! But it’s not all peachy, as in the real world, there are back streets where the forgotten live with grey permeating their lives, finding family and comfort in each other until the day comes when they’re forgotten by the living and the real death occurs.

The curse against music continues into the afterlife and Miguel’s journey sometimes evolves into an overwhelming emotional trip, which is why I believe the film should have been graded 12 and not K. Although it’s indisputably fantastic that they’re finally addressing real life issues such as death and notions of afterlife in kid’s films, it’s inevitable that young children will have questions buzzing in their minds and their parents or guardians should be prepared to answer!

There are fabulous images and ideas throughout, including the funny security armed border crossing with skeletal face recognition, (one can only cross if family members have put up a photo of them in the real world,) the horizontally layered spiralling city, beautiful golden leaf bridge, dancing Frida Kahlo actors, dead musicians, superstar playpens; it really is visually impressive, drawing you into the parallel and fascinating world of the dead. The deceased themselves are clever skeletal versions of their human bodied selves; perfectly characterised and each one uniquely individual and full of life!

Like a piñata, Coco is beautiful to look at and full of lavish visual and emotional gifts. The plot is complex but comprehensive, the music is catchy and based on traditional Mexican songs, and overall, a film where Mexican culture springs to life filling the screen with love, family, laughter and ‘forbidden’ music.