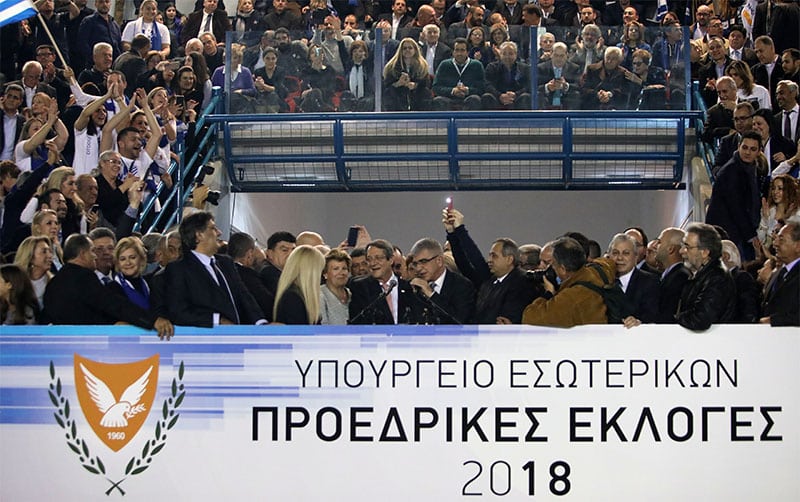 Re-elected President Nicos Anastasiades was congratulated for his feat on Sunday, garnering the support of over 50 per cent of voters and was even wished divine light for the next half decade he is set to govern the country.

Akel general secretary Andros Kyprianou, whose party backed independent candidate Stavros Malas, said the result did not satisfy them but the wish of the people was to be respected.

“We lost the election fight but politically and ethically, we’re winners.”

Kyprianou congratulated Anastasiades saying Akel remained in opposition and although it would continue to serve the good of the people it was not deluded.

“We have a radically different understanding of socio-economic policy. Mr Anastasiades ruled for five years with expediency and gave a lot to a few, and very little to many.”

The president cannot be trusted on the Cyprus problem, Kyprianou added while thanking Malas for the fight he gave. “It was a difficult and uneven fight but we gave it with dignity, ethos, honesty and seriousness.”

Disy leader Averof Neophytou, struggling to make his speech with a hoarse voice at Anastasiades’ headquarters amidst constant interruptions from a cheering crowd, praised the result but also congratulated Malas and called on attendees to give a round of applause to Akel.

“Nicos Anastasiades has proved, in practice that he is a president who knows, can and wants to build the necessary bridges to keep the country moving forward. He is the president who in difficult conditions, with consensus and wisdom managed to cooperate with political powers for the economy and the Cyprus problem. We will continue this way for the next five years.”

The aim is to further support investment in a bid to fight unemployment and create new jobs.

In a brief statement, Diko congratulated Anastasiades for his victory saying “the elections are over but the problems remain.”

It added that the party leader Nicolas Papadopoulos, who ran and failed for the presidential seat not making it passed the first round, would exercise a “constructive and productive opposition, contributing towards solving problems.”

Papadopoulos, Malas and Edek leader Marinos Sizopoulos and Citizens’ Alliance leader Giorgos Lillikas called Anastasiades to congratulate him on his victory which saw him garner 55.99 per cent of the votes.

Solidarity Movement, headed by Eleni Theocharous also extended congratulations, saying there was a major political divide in their views as far as the Cyprus problem was concerned.

“We hope he has divine light to change his strategies for the benefit of the Cypriot people and Cypriot Hellenism.”

Kyprianou’s speech after the result earned the irk of Green Party leader Yiorgos Perdikis after Akel’s man jibed at the “so called centered party” for not remaining true to their goals because if they had, then “change would have been achieved.”

Perdikis did not let that go unnoticed, posting a question to the general-secretary on Twitter saying “in football, when a team loses, the coach doesn’t usually blame fans of a third team because they didn’t go to the field to support their own. Does this happen in politics Mr. Kyprianou?”

Also on Twitter, Perdikis also extended his congratulations to Anastasiades.

Ministers in high spirits as reshuffle hinted at

Our View: The next five years will be a lot tougher for Anastasiades