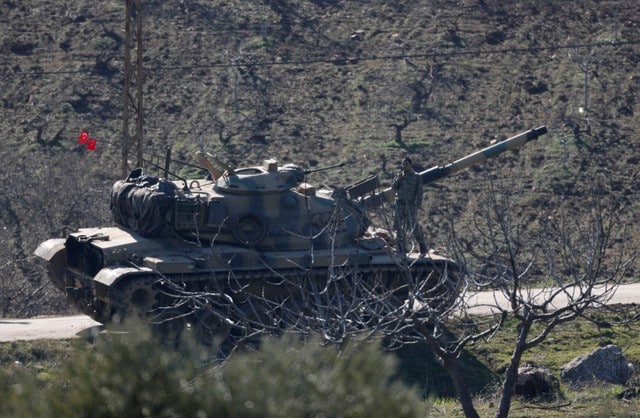 A Turkish soldier was killed in a rocket and mortar attack by militants in north-west Syria as Turkish forces were setting up a military post in the largest remaining stronghold of opposition to President Bashar al-Assad, Turkey’s military said on Tuesday.

It was the second attack in a week on Turkish soldiers trying to establish a position near the frontline between rebels and pro-Syrian government forces, under a deal with Russia and Iran aimed at reducing fighting in the area.

That deal largely collapsed in December when the Syrian army along with Iranian-backed militias and heavy Russian air power launched a major offensive to take territory in Idlib province and surrounding areas.

Turkey said five soldiers were also wounded in Monday night’s attack and that Turkish forces responded with retaliatory fire. The armed forces did not specify who the militants behind the attack were. A civilian member of the Turkish contingent was also wounded, they said.

The army began setting up the outpost on Monday south-west of Aleppo city, the deepest position they have established so far inside north-western Syria under the agreement with Moscow and Tehran aimed at “de-escalating” the violence.

Turkey, which supported rebel fighters trying to overthrow Assad, has worked with Assad’s main international backers Russia and Iran in recent months to try to stem some of the bloodshed in Syria’s nearly seven-year-old civil war.

But all three countries remain deeply involved in the fighting, and stark divisions remain.

In Idlib, Russia has intensified air raids on rebel-held towns after jihadist fighters shot down a Russian warplane and killed its pilot. Iran-backed Shi’ite militias also helped the Syrian army advance in the region last week.

In a warning to Ankara, a commander in the military alliance supporting Assad said the Syrian army had deployed new air defences and anti-aircraft missiles to frontlines with rebels in the Aleppo and Idlib areas close to Turkey.

“They cover the air space of the Syrian north,” the commander told Reuters. That would include the Afrin area where Turkish warplanes have been supporting a ground offensive by the Turkish army and Free Syrian Army factions.

The Syrian Observatory for Human Rights monitoring group said the observation post being established by Turkey was near the village of al-Eis, which would place it less than five km from territory held by Syrian government forces and their allies.

A week ago, a large Turkish military convoy heading for the same area pulled back after it was hit by a car bomb which killed one person.