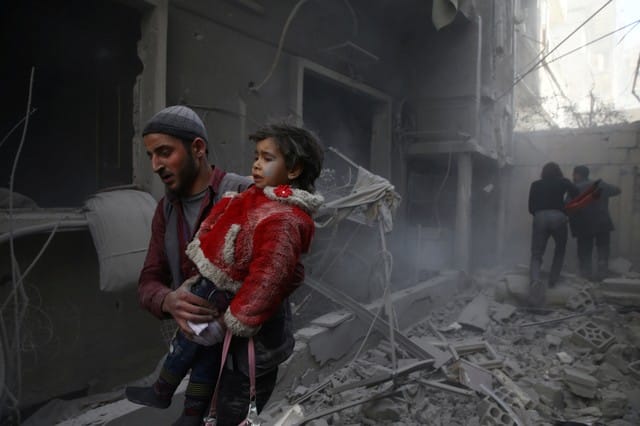 File photo: A man holds a child after an airstrike in the besieged town of Douma, Eastern Ghouta, Damascus

A U.S.-led coalition and its local allies in Syria struck pro-government forces with air and artillery fire overnight to repel “an unprovoked attack” near the Euphrates, the coalition said on Thursday.

The incident underscores the potential for further conflict in Syria’s oil-rich east, where the U.S.-backed Syrian Democratic Forces (SDF) alliance of Kurdish and Arab militias holds swathes of land after its offensive against Islamic State.

Syrian President Bashar al-Assad, who is supported by Russia and by Shi’ite militias backed by Iran, has said he wants to take back every inch of Syria.

The pro-government forces were “likely seeking to seize oilfields in Khusham” east of the Euphrates in Deir al-Zor province, said a U.S. official on condition of anonymity.

The attack was carried out by 500 troops backed by artillery, tanks, multiple-launch rocket systems and mortars but the coalition and its allies killed more than 100 of them, the official said.

Syrian state television reported that the coalition had caused “dozens of dead and wounded” by bombing pro-government forces. But a commander in the military alliance supporting Assad disputed the death toll, saying seven members of the pro-government forces were killed and 27 injured.

In a letter to the United Nations, Syria’s foreign ministry described the strike as a “war crime” and called for the coalition to be dismantled, Syrian state news agency SANA said. “We demand (that the international community) condemn this massacre and hold the coalition responsible for it.”

The U.S.-led coalition was set up in 2014 to battle Islamic State fighters in both Syria and Iraq, who were largely defeated last year. Some 2,000 U.S. forces remain on the ground in Syria, allied to the Kurdish-led SDF alliance, which holds the largest swathe of territory still outside the control of the government.

The Syrian civil war, now entering its eighth year, has killed hundreds of thousands of people and driven more than 11 million from their homes, while drawing in regional countries and global powers supporting client factions on the ground.

For the most part, the U.S.-backed SDF and the government forces backed by Russia and Iran avoided direct confrontation while both were fighting the common Islamic State enemy. Moscow and Washington maintain contacts in eastern Syria to prevent unexpected confrontation between forces they support.

Pentagon spokeswoman Dana White stressed the coalition strikes were purely defensive, as she explained the muscular coalition response at a news briefing. Washington was not seeking to fight Syrian forces, she said.

“We are not looking for a conflict with the regime,” White said.

Still, the incident underscored growing tensions in Syria amid reports of Syrian chemical weapons use elsewhere in the country.

The U.S. State Department on Thursday deplored the alleged use of chemical weapons and backed a call from the United Nations to put violence in Syria on pause for a month in order to deliver humanitarian aid and facilitate the evacuation of civilians. Russia said the proposal was a non-starter.

“That’s not realistic. We would like to see a ceasefire, the end of war in Syria, but the terrorists, I’m not sure they are in agreement,” said Russian U.N. Ambassador Vassily Nebenzia of the proposed one-month ceasefire.

The coalition said the attack occurred around 8 km (5 miles) “east of the Euphrates River de-confliction line in Khusham”, a town southeast of the provincial capital, Deir al-Zor.

The U.S.-led coalition had alerted Russian officials about the presence of SDF forces, the U.S. official said.

“Coalition officials were in regular communication with Russian counterparts before, during and after the thwarted (enemy) attack,” the official said.

Russia’s Defence Ministry said the pro-government militias involved in the incident had been carrying out reconnaissance and their activities had not been previously agreed with Russia.

No American troops were killed or wounded in the incident, officials said. Some U.S. troops had been embedded at the time with the SDF, whose headquarters in Deir al-Zor province had been a target of the attack.

One SDF fighter was wounded, the official said. Nouri Mahmoud, spokesman for the SDF’s most powerful element, the Kurdish YPG militia, described the clash as “skirmishes” and said each side had returned to their former positions.

“We suspect Syrian pro-regime forces were attempting to seize terrain SDF had liberated from Daesh (Islamic State) in September 2017,” the U.S. official said.

Neither U.S. officials nor the U.S.-backed coalition have offered details on the identity of attacking forces.

The coalition said in an email the pro-government forces had initiated hostilities with artillery fire, tank manoeuvres and mortar fire after a steady buildup of forces over the past week.

A reporter for Syrian state TV station Ikhbariya described the groups it said had been bombed by the U.S.-led coalition as “local people fighting (Islamic State) and the SDF”.

Russia’s Interfax cited the Defence Ministry as saying the incident showed the U.S. goal in Syria was not to battle Islamic State but “the capture and withholding of the economic assets”, an apparent reference to the Khusham oil field.