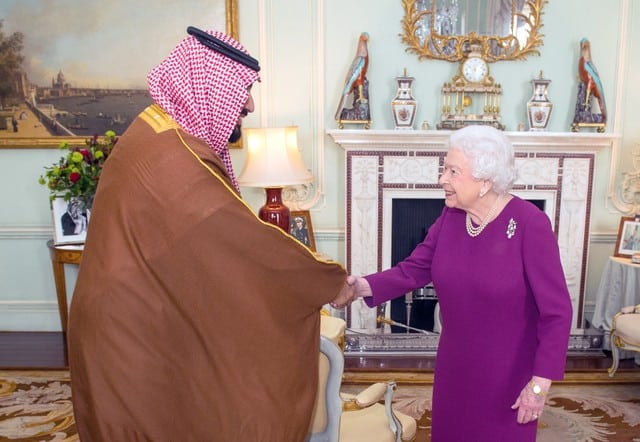 A fiery exchange in parliament between May and opposition Labour Party leader Jeremy Corbyn underlined tension in Britain over Prince Mohammed’s trip, which is aimed at building a broader economic partnership between the two countries, but has sparked protests about human rights and war in Yemen.

“The link that we have with Saudi Arabia is historic, it is an important one, and it has saved the lives of potentially hundreds of people in this country,” May said, pausing her answer briefly as opposition lawmakers cried “Shame!”.

The debate took place as Prince Mohammed lunched with the British monarch on the first leg of trip packed with displays of diplomatic affection designed to help the widen longstanding defence ties into a more far-reaching partnership.

Both countries sense an opportunity to broaden their existing relationship: Britain is looking for trading partners as it exits the European Union, and Saudi Arabia needs to convince sceptical investors about its domestic reforms.

But when Prince Mohammed meets May later on Wednesday, demonstrators will be outside protesting against both countries’ roles in Yemen where war has killed an estimated 10,000 people and where 8.3 million people depend on food aid and 400,000 children have life-threatening levels of malnutrition.

Corbyn said British military advisers based in Saudia Arabia were “directing the war” in Yemen and that the government was colluding in events which showed signs of being war crimes. May’s spokesman said the comments were “strange” and he would look into them.

Foreign minister Boris Johnson led the welcoming party for Prince Mohammed on his arrival late on Tuesday. Wednesday’s first official engagement was a trip to Buckingham Palace to see Queen Elizabeth – a rare honour usually reserved for heads of state.

The Saudi delegation will meet May and senior ministers inside May’s Downing Street offices to launch a UK-Saudi “Strategic Partnership Council” – an initiative to encourage Saudi Arabia’s economic reforms and foster cooperation on issues such as education and culture, as well as defence and security.

Britain is vying to land the stock market listing of state oil firm Saudi Aramco, but no decision is expected this week.

“We would like the Aramco share option to be issued in the United Kingdom and we will continue to suggest the City would be the best place for it,” junior foreign office minister Alistair Burt told parliament.

Later this month Prince Mohammed visits the United States, which also wants the lucrative listing, although sources said both countries may miss out.

British officials were privately delighted at the decision by Prince Mohammed, 32, to choose Britain as the major western destination on his first foreign trip since becoming heir to the Saudithrone last year.

The British government is keen to develop a two-way trade and investment relationship, eyeing both an expanded market in Saudi Arabia for service sector exports, and attracting Saudi cash to finance domestic projects.

Saudi‘s ambitious heir wants to show that “shock” reforms have made his country a better place to invest and a more tolerant society.

Business deals are possible with British defence group BAE Systems and European weapons maker MBDA, and initial agreements could be concluded on gas exploration, petrochemicals and other industries, according to British and Saudi sources.

The three-day visit will include a second Royal audience – dinner with the Prince Charles and Prince William – a briefing with national security officials, and a prestigious visit to the prime minister’s country residence.

May intends to use the private dinner at Chequers on Thursday, a 16th-century manor house 40 miles (60 km) northwest of London, to bring up concerns over the humanitarian crisis in Yemen, her spokesman said.

A Saudi-led military coalition is fighting the Houthi movement in Yemen, generating what the United Nation said in January was the world’s worst humanitarian crisis.

Protesters are planning to target the Saudi officials over Yemen and other human rights issues, and Britain for licensing £4.6 billion of weapons sales to Saudi Arabia since 2015.

May said all arms sales were strictly regulated, that Saudi Arabia’s involvement in the conflict was backed by the UN Security Council and her government supported it.

Speaking to reporters in London on Monday, Saudi foreign minister Adel al-Jubeir said his country had failed to effectively communicate the reasons behind its involvement in Yemen, but that they had not chosen to start the war.

Buses have spent two days touring London with banners accusing Prince Mohammed of war crimes, with more planned for Wednesday before the main rally, and parliament called an urgent debate on the visit.

“There will be widespread concern across parties at the fact that the dictatorial head of a medieval, theocratic regime is being given the red carpet equivalent of a state visit,” said Vince Cable, leader of the Liberal Democrat Party.

Plant of the week: Poisonous plant was used to protect against lightning

Laiki gets offer for stake in Malta’s Lombard Bank