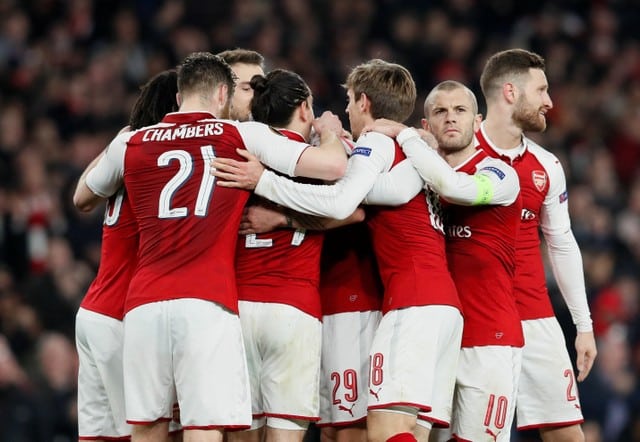 Arsene Wenger praised his Arsenal players for the “resilient and disciplined” way in which they qualified for the Europa League quarter-finals with a 3-1 win over AC Milan on Thursday.

“We won the two games and finished the (second) game in a convincing way against a solid team,” he told reporters after a Danny Welbeck double and Granit Xhaka goal secured the victory.

Arsenal’s 2-0 away win against Gennaro Gattuso’s side in the first leg put the Londoners in the driving seat for the return fixture, but the game at The Emirates was slow to get going.

“It’s always difficult to finish the job, especially when you have a good away result because you don’t know a little bit (what’s going to happen) in between,” Wenger said.

The match came to life in the 35th minute when Milan’s Hakan Calhanoglu struck a superb 30-yard goal, finding a gap in Arsenal’s shaky defence and throwing the Italians a lifeline.

But Arsenal restored their two-goal aggregate advantage two minutes later when Danny Welbeck won and then scored a penalty which was controversially awarded and enraged the Milan players.

“You could see straightaway the response in the (Arsenal) team, and we pushed forward and were dangerous,” Wenger said.

Welbeck went down after the lightest of touches on the back of the ankle but when asked if his player had dived Wenger said he would need to see a replay before passing judgment.

Remarkably, it was Welbeck’s first penalty in senior football but Wenger had no qualms about him taking it.

“Yes it was his first penalty but we worked on it in training a lot,” he said. “He took many penalties and he convinced me that he can be a good penalty-taker.

“Every game he plays makes him stronger and that is very good for Danny, for his confidence, for the fact that he did fight very hard,” added the Frenchman.

“He scored a penalty that was a vital one, an important one, and he had the mental strength to have a clean finish.”

Arsenal will find out their quarter-final opponents on Friday and Wenger wants to avoid Atletico Madrid, who demolished Lokomotiv Moscow 8-1 on aggregate to reach the last eight.

“Maybe the favourite is Atletico Madrid. But what I like has no influence. We just have to wait for tomorrow,” he said.

Arsenal are sixth in the Premier League and unlikely to finish in the top four so their only likely route into next season’s Champions league is by winning the Europa League.