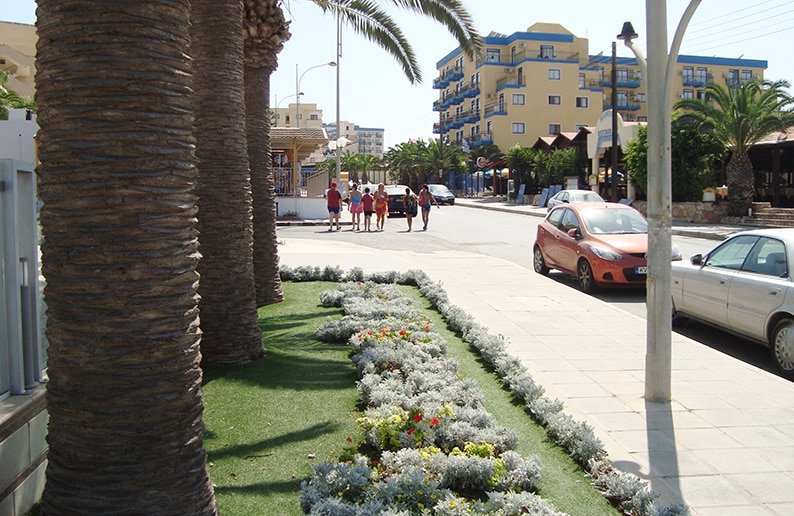 A race is underway for the completion of redevelopment works in one of the most popular tourist areas, Pernera Avenue in Protaras, which is overdue and has already affected businesses.

The head of the public works department, Chrystalla Malloupa, who had a meeting in Protaras with the contractor and Paralimni Mayor Theodoros Pyrillis, said that crews from her service might give a helping hand so that the redevelopment, which was to be completed by the end of March, picks up pace.

The project, she said, was given a 134-day extension and was to be completed by the end of March, just before the beginning of the tourist season.

“Unfortunately, it appears due to some problems we are now looking into, the contractor failed to complete the project,” Malloupa said.

She added that the situation is expected to begin improving “before June or July”.

“We hope that things will be much better than today,” she said. Efforts were underway, she said, throughout the year, in cooperation with the Paralimni mayor, to assist in speeding up works.

She said that the contractor will be slapped with a €3,600-fine for each day of delay, while there is a great possibility to also impose deductions on the down payment, “which is an important financial burden for the contractor”.

Works, that began in the spring of 2016, were to be completed within 18 months. The project, which is 80 per cent financed by the state and the rest by the Paralimni municipality, aims at redeveloping Pernera Avenue.  It provides for a bicycle lane, adequate road lighting, large sidewalks and various other amenities for pedestrians, cyclists and drivers.

“We are in constant consultations with the contractor to find the best way for the completion of the project,” she said.

Malloupa said that one of the reasons for the delay could be liquidity problems, which is not uncommon among contractors following the 2013 economic crisis.

She said that the contractor had delivered on time other projects in the past and was considered to be among the “very good ones”. “Based on today’s facts, however, we are having several problems”.

Outside the meeting room, several business owners had gathered to express their grievances over the delay. The redevelopment meant prolonged hindrance of access to businesses along the avenue.  Restaurant owners complained that they are unable to open for business, while tourists staying in hotels on the avenue reportedly asked to be accommodated elsewhere.

Pyrillis said that the contractor was proven to be “unreliable” on several occasions and that he had warned that the way he is handling the situation would “ruin the tourism of Protaras”.

“He has been helped a lot by all of us to be able to cope but unfortunately, he has failed,” Pyrillis said.

Pyrillis said that his municipality’s and other stakeholders’ efforts to prolong the tourist period, which this year began on March 20, went down the drain.

“All of our efforts, the money spent from us, the Cyprus Tourism Organisation, travel agents and many other business owners are going to waste,” Pyrillis said.

But the contractor, Kyriacos Avraamides, said that the delays were not completely his company’s fault.

“A hotelier had complained that the works were a disturbance and as a result the project had been interrupted for several months,” Avraamides said. Adding to the delay, he said, was also changes made by the municipality and town planning as to the project last December, “which meant the purchase of new materials by us, new orders, time for the delivery of the new materials and so on”.

Avraamides said he does not claim that his company bears no responsibility, but “what I am saying is that there have been many serious reasons that imposed this delay”.

With even closer cooperation with the public works department, he said, the project could be completed within a month.

“It is unfair to blame the company for everything,” he said.

At the moment, he said, the company’s crews are working on three fronts; laying asphalt, excavating and laying tiles on the sidewalks.

He asked for a bit more patience.