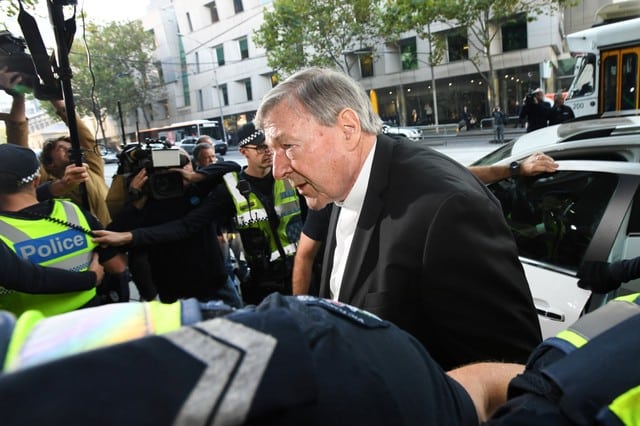 Vatican Treasurer George Pell must face trial on charges of historical sexual offences, an Australian court ruled on Tuesday, making him the most senior Catholic official to be tried on such allegations. He pleaded not guilty.

Magistrate Belinda Wallington handed down her decision that Pell’s case will proceed to trial in a Melbourne court, following a month-long pre-trial hearing.

Pell did not comment when he left the court, surrounded by police and flanked by his legal team.

Pope Francis has said he would not comment on the case involving his economy minister until it was over.

The Vatican said in a statement that it had “taken note” of the court’s decision and that the leave of absence the pope granted Pell last year so he can defend himself “is still in place”.

A statement issued by Pell’s lawyers and distributed by the Sydney Archdiocese, his last employer before his Vatican posting in 2014, said Pell had fully cooperated with police investigators and “always and steadfastly maintained his innocence”.

“He would like to thank all those who have supported him from both here in Australia and overseas during this exacting time and is grateful for their continuing support and prayers,” the statement said.

In her ruling, Wallington dismissed what Pell’s lawyer has called “the worst of the charges” levelled against his client, but said allegations of offences at a pool and at a church in Victoria state will be heard.

Pell was ordered to appear in the Melbourne County Court on Wednesday, when it will be decided how and when the case will proceed.

Some charges “are of such a vastly different nature” from the rest that he foresaw a separation of trials, Pell’s lawyer, Robert Richter, told the court at the end of the committal hearing.

Pell, 76, sat quietly behind his lawyer, wearing a black suit with a clergyman’s collar, as the magistrate’s decision was read out over 90 minutes.

During the pre-trial hearing, Pell’s defence raised questions about police procedure, the reliability of witnesses’ memories and their psychological condition.

Prosecutor Mark Gibson had said none of the complainants had resiled from their allegations against Pell under cross-examination and Victoria Police Detective Sergeant Chris Reed rejected Richter’s suggestions of serious flaws in the police investigation.

Wallington said the biggest set of alleged offences that she had dismissed “could not have occurred in the time frame alleged”.

On another charge that was dismissed, Wallington said Pell’s accuser was “so cavalier” with his evidence that a jury would not have been able to put any weight on it.

Pell was called back from Rome to his home country last year to face the charges. He has handed over his passports, Gibson told the court.