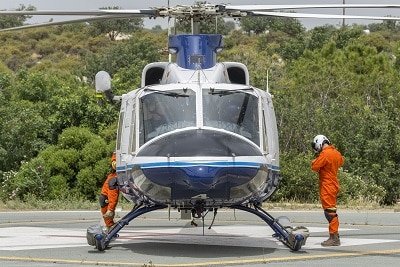 Three suspects were arrested and a fourth is wanted by police, in connection with Saturday night’s shooting of two policemen in Ypsonas, one of whom was in critical condition.

On Sunday afternoon intensive care and trauma specialists arrived from Israel in an air-ambulance to assess whether the officer, who was hit in the chest and abdomen, could be flown to Israel for treatment. He was critically injured after shots were fired at the patrol car he was in from a parked hire car.

The two officers were shot at in their car, about 10pm, after responding to a call about a parked hire car, in which three persons were behaving suspiciously. On arrival at the scene shots were fired at the patrol car and the officers returned fire. The assault weapons used against the patrol car were reportedly Kalashnikovs.

The injured officers were transferred to the Limassol general hospital.

So far, police arrested one of the  men wanted in connection with the shootings – 31-year-old Efthyvoulos Georgi, also known as Vouli, from Paphos. He had suffered injuries to the leg and chest in the shoot-out, police said, and was taken to hospital for treatment. Another man, arrested on Sunday afternoon, was believed to have been the third person in the assailants’ car.

A 33-year-old woman, arrested on Saturday after it emerged she had rented the car from a Paphos car hire company, was remanded on Sunday for eight days.

Police were also looking for 33-year-old, Haralambos Kalogeridis, holder of a Greek passport. Reports claimed the suspects were linked to the recent string of armed bank robberies in Limassol.

Police chief Zacharias Chrysostomou and Justice Minister, Ionas Nicolaou visited the two officers in hospital. Chrysostomou said that the police and the state will not let this incident go unanswered.

“The underworld is getting what is coming to them,” he said.

He praised the critically injured officer for his bravery. Despite being shot at, he said, “he exchanged fire and we had the results we have had in connection with the perpetrators”.

Chrysostomou said the officer was one of the best-trained in the field.  “He stood bravely against what appears to be organised crime,” he said.

He added that the most important thing was for the officer to be saved and for those involved to be brought before justice.

Nicolaou said that the incident confirmed that crime in Cyprus “is evolving and becoming more ruthless”. This was why police were constantly reviewing the measures they were taking and would continue to do so, he said.

President Anastasiades too went to Limassol general hospital at noon on Sunday to check on the officer. He said the injured man was “truly worthy of wearing the police officer’s uniform”.

Anastasiades, who also visited the other officer, that was shot and was being treated in a private clinic, said he was outraged about the shooting against policemen. An attack against members of the force was an attack against the state, he said.

“We will not allow criminals to believe that they can act the way they do,” he said. There would be zero tolerance for anyone – local or foreign national – who was under the impression they could gain wealth through illegal acts and who think they can bully the police, he added.

Police said the suspects were wanted in connection with conspiracy to murder, attempted murder, conspiracy to commit a felony, illegal possession of firearms and explosives among other things.

Police urged members of the public who may possess any information concerning the case, to call the Limassol CID at 25-805057, or the nearest police station, or the Citizen Hotline at 1460.

The fascinating world of the surreal

The joy of gardening