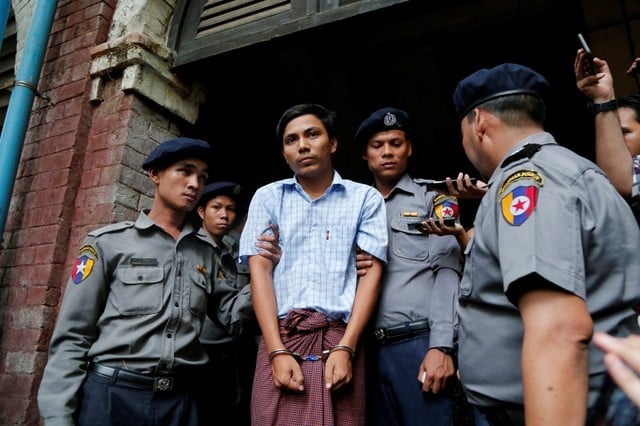 A Myanmar policeman now serving a prison sentence gave more details to a court on Wednesday about how he says two Reuters reporters were framed by police, in what has become a landmark press freedom case for the Southeast Asian nation.

Police captain Moe Yan Naing, 47, who since his original testimony on April 20 has been sentenced to a year in jail for violating police discipline, gave a blow-by-blow account of how he says a police chief ordered subordinates to give “secret” documents to Reuters reporter Wa Lone in a sting operation.

“I gave the testimony as I know and as I saw,” Moe Yan Naing told reporters after the hearing. He said he did not regret giving his testimony.

Lead prosecutor Kyaw Min Aung did not respond to a request for comment after the hearing.

Myanmar government spokesman Zaw Htay said: “It will be carried out according to the law. The court is free, impartial, independent and reliable. We guarantee that the defendants will have their own rights, which means choosing their own lawyers etc.”

The court in Yangon has been holding hearings since January to decide whether Wa Lone 32, and his Reuters colleague Kyaw Soe Oo, 28, will be charged under the colonial-era Official Secrets Act, which carries a maximum penalty of 14 years in prison.

At the time of their arrest in December, the reporters had been working on an investigation into the killing of 10 Rohingya Muslim men and boys in a village in western Myanmar‘s Rakhine state. The killings took place during an army crackdown that United Nations agencies say sent nearly 700,000 people fleeing to Bangladesh.

In an account that closely followed his original testimony, but went into greater detail, Moe Yan Naing said that on Dec 12 – hours before the reporters were arrested – he was among six officers who had previously been contacted by Wa Lone who were interrogated by the Police Special Branch.

When Tin Ko Ko found out that one of the six, Lance Corporal Naing Lin, had been in contact with Wa Lone but had not met him in person, he ordered Naing Lin to use his phone to arrange a meeting with Wa Lone that evening.

Moe Yan Naing said Tin Ko Ko told the policemen involved that if they did not “get Wa Lone” they would be detained.

Reuters has been unable to contact Tin Ko Ko or Naing Lin for comment. A police spokesman said after Moe Yan Naing’s previous testimony that the brigadier general “has no reason to do such a thing”.

Prosecutors had originally called Moe Yan Naing as a witness, but asked the court to declare him unreliable after his to testimony appeared to undermine their case. The judge rejected that application last week.

Moe Yan Naing was brought to court in shackles and wearing a dark blue prison uniform, in contrast to his first appearance last month when he had worn his police captain’s uniform and was not handcuffed.

He said he had been convicted and sentenced in his absence and still did not know which court had handed down the punishment.

Moe Yan Naing has said he spoke to Wa Lone in late November about police operations in Rakhine. He said Wa Lone introduced himself as a reporter and interviewed Moe Yan Naing at a teashop inside the headquarters of the 8th Police Security Battalion.

Moe Yan Naing’s 42-year-old wife, Tu Tu, listened to proceedings from the side of the courtroom. Together with their three children, she was evicted from police housing in the capital Naypyitaw the day following Moe Yan Naing’s first testimony. The family have since moved in with Moe Yan Naing’s father in his native town of Khin U, in central Myanmar.

Police have said the eviction was unrelated to the reporters’ case, but that the family had been overdue to move out of their apartment.

Wa Lone told journalists after the hearing that Moe Yan Naing “bravely proved that in our society, there are people who adore the truth and justice”.