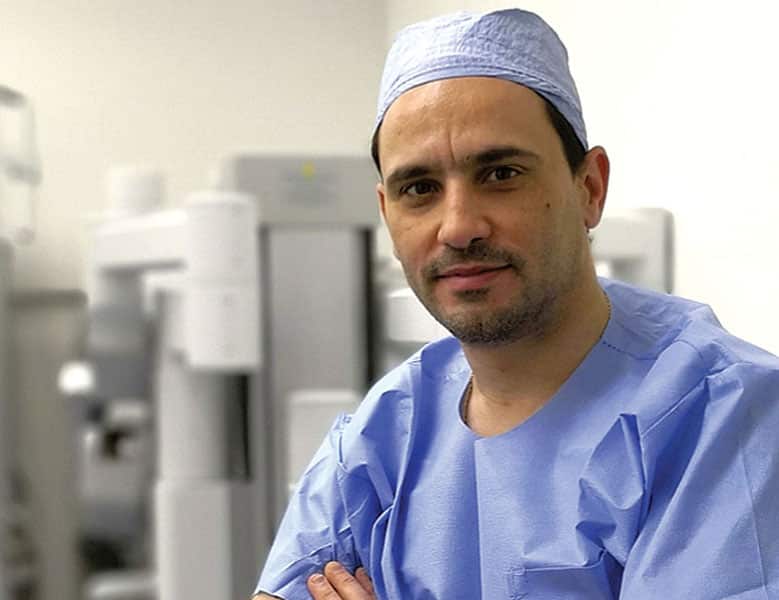 The future of everything around us it seems is linked to robotic technology and nowhere more so than in the field of surgery according to Dr Savvas Hirides.

Though the development of medicine and its marriage with digital equipment has become a given – ranging from X-ray machines, to the devices that tell us our blood pressure – to name a few, having a robot perform a surgery is no longer an alien concept.

Hirides, a laparoscopic and robotics surgeon from Greece with a Cypriot grandfather, was involved in the first team carrying out robotics surgery in Greece 11 years ago.

“Robotics gives us the ability to operate on patients through a computer with arms,” he says.

Essentially, it requires the surgeon take a seat in the ‘robotic cockpit’ and operate the complex device with its ‘robotic hands’.

“As a kid, I remember playing with computer programming software and old-fashioned robotic arms. After finishing my medical studies and the classic ‘open’ training of surgical residency, I would never imagine that these two passions of mine could be combined into one, i.e. this new form of surgical technique called robotic surgery.”

For Hirides, there is no question about which one he prefers.

“I can be quite certain answering your question: there is absolutely no comparison in operating with the robot versus open surgery. Being superior to open but also to laparoscopic surgery, robotic surgery is the future of modern surgery.”

Additionally, the ‘cockpit’ from which the surgeon operates “provides a stable, 3D, HD, stereoscopic, magnified vision inside the body and potentiates the surgeon’s movements with its articulated instruments mimicking human wrists”.

“As you realise, surgery can be performed through this stabilised platform with high precision and optimal safety for the patient,” Hirides adds.

It has revolutionised a host of surgeries including prostate cancer, hernia repairs, colectomies, and surgeries of the stomach, liver, bile duct, spleen, pancreas as well as gall bladder problems. It is also a valuable tool for morbid obesity surgery, helping surgeons perform safer sleeve gastrectomies and gastric bypasses, the surgeon said.

In his first ever robotic surgery – performed with his brother – the procedure left the patient without visible scars.

This however does not take away from the training every surgeon needs in open surgery, Hirides stipulates.

“They need to know surgical anatomy, pathology and basic principles of surgery met in open surgery.”

For the future, robotic surgery is both fascinating and frightening, Hirides said.

On the one hand, the opportunities it will bring to the operating table are limitless.

“Numerous robotic systems are ready to reach the market in the following five years. Advances in robotics follow evolution of computer intelligence (the so-called Moore law of computing capacity).”

One such example is “the ability of ‘clever’ robotic instruments to perform instant biopsies and identify malignancy during surgery”, Hirides said.

On the other hand, the evolution will grow so fast, it will threaten the jobs of many people in the operating room and hospita.

“My personal fear with these enabling technologies is only this slight possibility of leaving the human factor completely outside the room. I think that such thing should never take place no matter how intelligent surgical robots will become.”

In Cyprus, Hirides said the island is doing fairly well. He was invited to help with the first procedures carried out in the American Medical Center.

There are three robotic systems in Cyprus, according to Hirides “and a lot of young surgeons have shown interest in the technology. Unfortunately, Cyprus needs more surgeons already experienced in advanced laparoscopic and robotic surgery to use this technology with safety and good results.