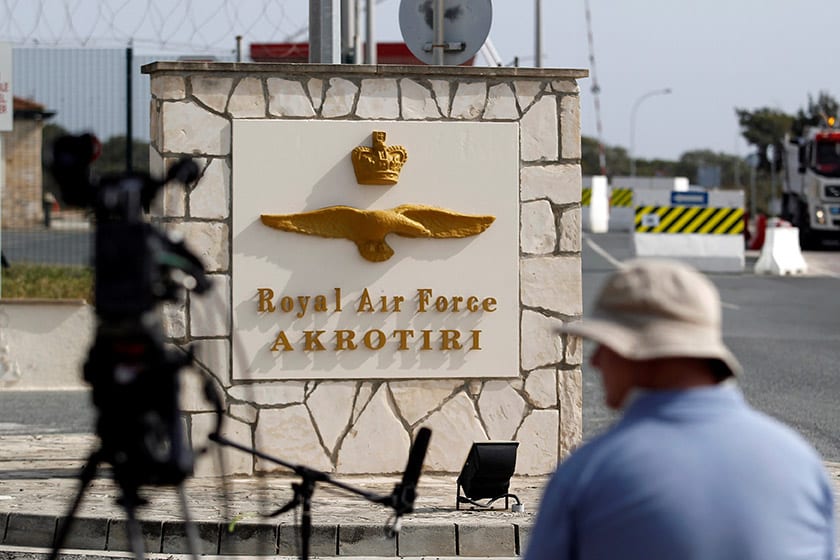 BRITAIN is drawing plans to expand a port at RAF Akrotiri to service its military bases on the island in case of Brexit without a trade deal with the EU, reports said on Thursday.

The reports were neither confirmed nor denied by UK authorities.

According to The Times, plans for the facility at RAF Akrotiri are already being drawn up as part of preparations to limit the impact of Britain leaving the EU without a deal.

Currently, equipment and other goods headed for the British sovereign bases (SBA) on the island go through Cypriot ports. But British officials are concerned that inspections imposed by the EU without a Brexit deal “would seriously threaten operations,” The Times said.

The British bases in Cyprus, when asked to comment on Thursday, cited a UK government statement saying: “We remain absolutely confident that we are going to secure a good deal as that is in the interests of both the UK and the EU and we working with the government of Gibraltar and our European partners to ensure this.

“At the same time, it is right that we make sensible precautions for no deal, to avoid any potential disruption in Gibraltar or of the sovereign base areas in Cyprus.”

A small port already exists at Akrotiri but it would need considerable expansion to be able to service the SBAs’ needs.

The spokesperson at the bases declined to comment on the extent to which the bases currently use the island’s ports, saying they did not have that information to hand.

According to forces.net on Thursday, the base does have a landing jetty but it is not big enough to take all of the supplies needed – that small port would be where the expansion would happen.

The Times said the MoD is thought to have put a provisional claim on the £1.5bn contingency funds for no-deal preparations for the project. Other UK media reports said the project would cost less than £100 million.

It quoted unnamed Whitehall source who said the plans were “essentially to extend the RAF port in Akrotiri because it’s too small to be used properly”. They said that the plan was to “basically build a new one”. “If we had a no deal the port — a Cypriot one — would become extremely problematic whereas the RAF port is considered British territory,” the source said.

Gerald Butt, a former BBC Middle East Correspondent told British Forces Radio (BFBS) on Thursday that should there be no Brexit deal, things would get complicated with supplies having to cross borders. It would be “inconvenient, time-consuming and disruptive to military operations”, he said, especially if Akrotiri was vitally needed in the Middle East or elsewhere. “The most obvious thing to do is to build a naval port,” Butt said. “It would be starting from scratch”.

“If there was no deal, it would make a lot of sense,” he added. However, he foresaw several issues that might need addressing. “What would the reaction of the Cypriots be?”

He conceded Cyprus doesn’t have to be consulted by the UK but mentioned an “underlying current” or among some Greek Cypriots about the continued British presence on the island due to issues related to colonial rule.

In 1960 when Cyprus gained independence, Britain retained 157 square kilometres of sovereign territory at Akrotiri/Episkopi and Dhekelia which are being used as military bases. It also has radar installations on the Troodos mountain and a listening post at Ayios Nicolaos, in Famagusta. RAF Akrotiri has been involved in operations in the Middle East for years 24 including during the 2003 Gulf War, which according to forces.net, saw more than 15,000 aircraft movements that year.

It said the bases was also used an air bridge into Afghanistan and was a staging base for support aircraft for operations over Libya in 2011.

In September 2014, Akrotiri joined the fight against ISIS in Iraq, carrying out daily sorties, and more recently, in April this year, took part in an raid in Syria orchestrated by the US, the UK and France. Four Royal Air Force Tornado jets fired Storm Shadow missiles during at a military facility near Homs where it was assessed that Syria had stockpiled chemicals. Britain’s Prime Minister Theresa May only informed President Nicos Anastasiades just after midday the same day hours after the air strikes on the Syrian targets.

EU’s Barnier says must prepare for a ‘no-deal’ Brexit