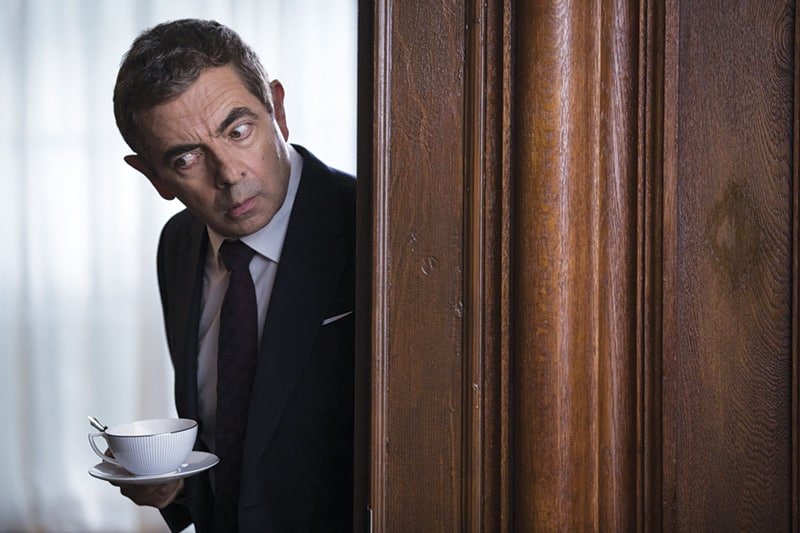 What’s Rowan Atkinson’s point? I don’t mean ‘What’s the point of Rowan Atkinson?’, which would be rude and, let’s face it, unfair – whatever you might think of Mr Bean, he’s loved by multiple generations with a passion once reserved for Charlie Chaplin and Laurel and Hardy – but what does he mean, at 63, by once again trotting out Johnny English, a James Bond knock-off whose one-joke persona struggled to fill one movie, let alone three? Even if Johnny were hilarious (and maybe he is; it’s a matter of taste), why resurrect him, a full seven years after Johnny English Reborn? Why now?

The answer to that question is the most intriguing part of Johnny English Strikes Again – though also the least intriguing for the many fans who just want to laugh at Atkinson’s trademark mannerisms, the bulging eyes, pursed lips and feline expressions of sly complacency. As befits his surname, Johnny English is a nod to today’s England, a country in thrall to technology – but Johnny himself is defiantly analogue, lacking even a phone as he battles an Elon Musk-like baddie who’s using the internet as a weapon of mass destruction. Like John McClane in Live Free or Die Hard, who went up against a similarly ruthless cyber-terrorist, he typifies old-school values – also including casual sexism and being useless with foreign languages – values which the PM herself (Emma Thompson in a cheerfully sloppy performance) finally extols as “fundamentally British qualities”. You could call this a Brexit movie, and you’d have a good argument.

Johnny English as a Little Englander; is that the point? Maybe – but what kind of humourless scold would bring up Brexit in discussing a comedy? Alas, the comedy here is so half-baked it’s barely worth discussing, except to say that the jokes often start with a promising set-up but hardly ever manage to milk it properly. Again and again, the film seems to run out of ideas in mid-routine, ending the gag with a limp, tossed-off punchline.

Johnny recalls James Bond, but in fact most resembles Inspector Clouseau – another vain action hero unaware of his own ineptitude – in the old Pink Panther films. Those films, however, were often meticulous, whereas this one is slapdash (it’s more like the useless, late-00s Pink Panthers with Steve Martin). 40 years ago, The Pink Panther Strikes Again featured a well-worked routine where assassins tried to kill the oblivious Clouseau but ended up killing each other – and Johnny English Strikes Again tries a similar joke, but it barely even counts as a joke. Russian spy Ophelia (Olga Kurylenko) tries to shoot, then garrotte Johnny while he’s dancing merrily (a little too merrily; he’s taken a high-energy pill by mistake) – but the set-up isn’t milked, it just sits there: Ophelia tries to shoot but can’t quite do it, then she tries to put the wire around his neck but can’t quite do it, then he throws her to the ground in a too-energetic dance move and accidentally knocks her unconscious. There’s no tension, no escalation. It’s not a joke, just a series of slapstick bits.

So it goes, the film being not so much awful as limp and perfunctory. Johnny poses as a French waiter with a bad accent (more Clouseau!) and wreaks havoc with a flambé dish – but the havoc, again, is simplistic and obvious (he sets fire to the dish, and ends up setting fire to the restaurant). He inflates a dinghy inside the car, the sole point of the gag being a shot of Atkinson’s face squashed against the car window. He assures his long-suffering assistant that “there’ll just be a slight pop”, but of course it’s not a slight pop but a big explosion. The film has its pleasantly silly moments – Johnny tries to talk from inside a suit of armour, and his visor keeps falling down – but the best one can say about Johnny English Strikes Again is that it comes with a TV-sketch mentality, content to offer isolated gags and a two-second bit before the next bit. Needless to say, it gets old at 90 minutes.

What’s Rowan Atkinson’s point? Not the comedy, I suspect – given how primitive and undeveloped most of it is – but the larger theme of English as an Englishman. Early on, there’s a scene where our hero, brought back from retirement due to a dearth of secret agents, goes to the MI7 equivalent of ‘Q’ to be issued with a gun – but instead gets issued with a smartphone by the young employee, who talks up the phone’s Twitter and Uber capabilities and recites a health-and-safety warning (this product “can cause injury and bodily harm”) before finally producing a weapon. Johnny English is supposed to be an imbecile but he’s not the imbecile in that scene, he’s the sensible one – and the film seems less keen to show him as a slapstick buffoon than a well-meaning dinosaur, fighting the forces of nannying, tech-gone-mad modernity and (somehow) succeeding. The key line goes to the villain – but it could just as well have gone to Johnny, or indeed Rowan Atkinson as he contemplates high-tech, post-imperial, ruthlessly digital England: “What has happened to this country?!”.

Unidentified vessel spotted off Akamas was not migrant boat (Updated)

National Theatre screenings are back