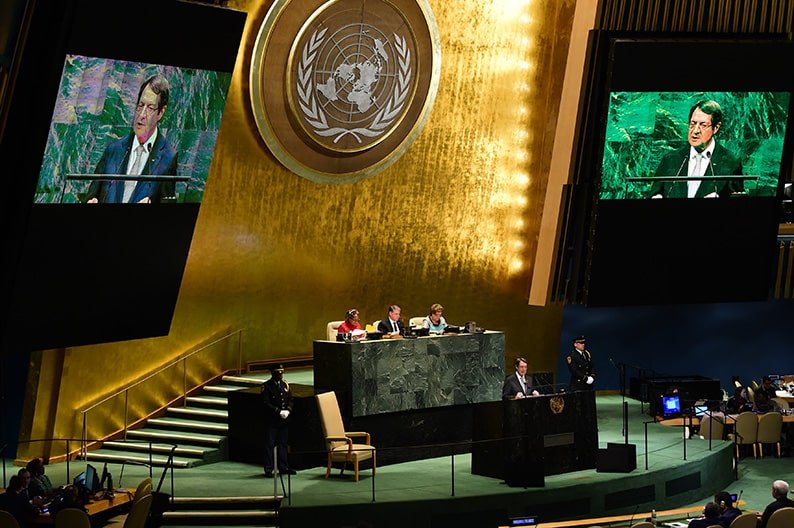 LAST SUNDAY we had written about the Cyprus problem show going to New York but having followed what happened, we realise that perhaps ‘theatre’ would have been a more apt description of the goings-on. Greek Cypriot correspondents in New York reported that Turkey’s foreign minister Mevlut Cavusoglu was engaging in theatre when he went across the UN General Assembly auditorium to shake hands with his Cyprus counterpart Nicos Christodoulides, attempting to show his country’s goodwill.

They had a point, but they missed the theatre put on by President Anastasiades, pretending that he was determined to return to negotiations while setting conditions that would ensure the Turkish side would not agree to engage in any form of talks. Ironically, speaking to journalists on Friday, after his meeting with UN Secretary-General Antonio Guterres, an exasperated Anastasiades responded to criticism in Cyprus about his General Assembly speech, by saying “I did not come here to give a speech to satisfy the domestic front.”

The reality, however, was that his actions in New York had exactly this objective – satisfying the domestic front while pursuing his ‘partition by stealth’ agenda. The Greek Cypriot positions he said he conveyed to Guterres on Friday would have confirmed to the UN Anastasiades’ reluctance to constructively engage in a new peace drive, but these would have satisfied the domestic front. The hardliners would have been happy because he had set conditions that ruled out the resumption of talks, while the more gullible members of the pro-settlement camp would be fooled into thinking he had not given up on reunification.

The pretence of an interest in the resumption of the talks has another objective – maintaining some UN involvement in Cyprus in order to strengthen the government’s case against the possible withdrawal of Unficyp, which is under discussion at the Security Council. By having some kind of procedure in progress might justify an extension of the peacekeeping force’s presence because no Greek Cypriot would be happy without UN soldiers guarding the buffer zone. A border with Turkey, without the security offered by a UN-controlled buffer zone, would cause alarm among Greek Cypriots, which the government would have difficulty managing.

This was why a part of Anastasiades’ speech at the UN General Assembly was devoted to the Unficyp issue. While acknowledging the primacy of diplomacy in peace-making he believed the peace-keeping operation offered a much-needed supportive role, but “in the absence of a negotiating process, “the need for peace-keeping becomes much greater and indispensable.” The risks involved (in a withdrawal of Unficyp) are far too grave to allow for any experimentations in this regard,” he warned. Ideally, the absence of the negotiating process should not lead to the downsizing or withdrawal of Unficyp, as this might have an impact on his secret agenda.

Before leaving for New York, Christodoulides said that the government had several proposals for averting a deadlock, as this had to be avoided at all costs. It was a statement that made little sense – the only way to avert deadlock is to reach a deal – but was indicative of Anastasiades’ short-term, tactical thinking aimed at preventing any unpleasant decisions on Unficyp, when its mandate is reviewed by the Security Council in January. In short, he is happy with a deadlock as long as it does not affect the continued presence of Unficyp, but if it does he would try to avert it by agreeing to some movement on the process, such as proximity talks, inconclusive preparations for another conference and maybe even a bout of open-ended, direct negotiations. He will agree to anything to ensure the peace-keeping force remains, except a bi-zonal, bicommunal federation.

Guterres gave nothing away at his meeting with Anastasiades, reportedly saying that he was waiting for the report by his representative Jane Holl Lute, before deciding whether there would be another initiative. It is unlikely however he will be persuaded to go down the path Anastasiades would like to see him go. Even the UN no longer sees the point of talks for the sake of talks, while Turkish Cypriot leader Mustafa Akinci made it clear, after his Friday meeting with Guterres that the cycle of the old talks had closed, pointing out they had been going for 50 years without achieving a result.

His argument could also be applied to Unficyp. Its 54-year presence is one of the reasons no result was achieved because it offered Greek Cypriots the security that a settlement would provide. Anastasiades made the extension of the force’s presence his number one priority so that it could safeguard the status quo and make a settlement unnecessary.

Did UN laugh with or at Donald Trump?

Tales from the Coffeeshop: On a mission to become the country’s sweetheart