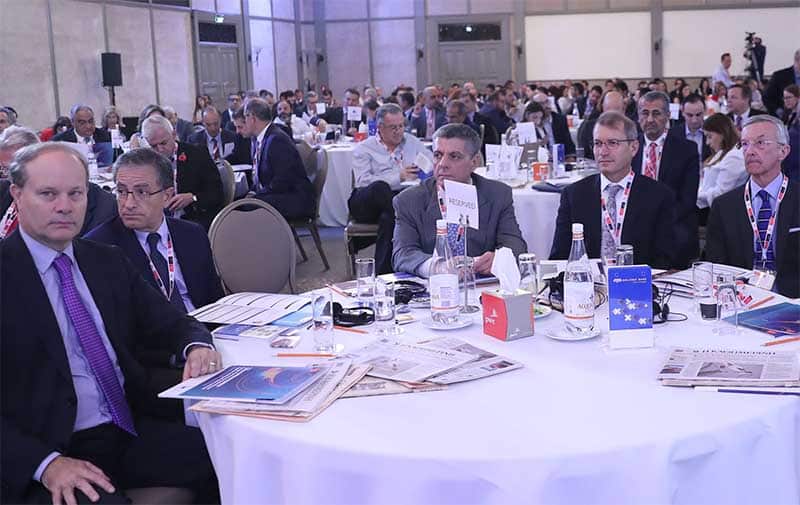 Audience members at the conference

After tackling non-performing loans, the volume of which he believes will go down very fast in the next year, unions are “the only stone not upturned”, Hellenic Bank CEO Yiannis Matsis told the 14th Economist Conference in Nicosia on Friday.

He predicted the unions will be the next matter to be tackled. Matsis said banks should focus on being meritocratic organisations, should have transparent policies, flexibility and digitisation. Together with the unions we will have to resolve the matter, he added.

After the crisis of 2013, he said all stakeholders got together to try and get out of the crisis, adding that the effort “has been a huge success.”

The banking supervision which was dreadful and corporate governance have improved and keep on improving Matsis said giving the example that now 52% of members of banking boards of directors have international experience as opposed to 5% previously.

He also said that the Hellenic Bank closed 50,000 high risk accounts in the last year and that the banking sector has deleveraged greatly to 280% of GDP down from 640% of GDP.

Referring in particular to the purchase by Hellenic Bank of the good part of the Cyprus Cooperative sector he said that the bank’s portfolio increased from €7 to €17 billion, up by 2.5 times making the Hellenic Bank the first retail bank of the island and that achieved €130 million of cost synergies, annually. The bank, he added, also reduced its NPLs down to 25% from 50%.

Others were not so optimistic about NPLs. Isfaddyar Zamman Khan, a World Bank financial sector specialist said Cyprus’ NPL rate is still very high and described the problem as a “perpetual disease”.

Henry MacNevin, associate managing director of Moody’s investor service pointed out that despite progress, Cyprus continues to register “a high burden of NPLs.”

“This remains a very high level. They are improving but still a lot needs to be done. We expect this improvement to continue,” he said, pointing out that this is reflected to the agency’s positive outlook of the banking system.

He added, the banking system is expected to return to profit in 2018.

“The system is moving in the right direction, NPL remain at high levels and process will remain a long one. Bank and all stake holders will need to maintain focus on the problem,” he concluded.

A measure of Shakespeare

Drinking age raised from 17 to 18, penalties hiked for illegal sales