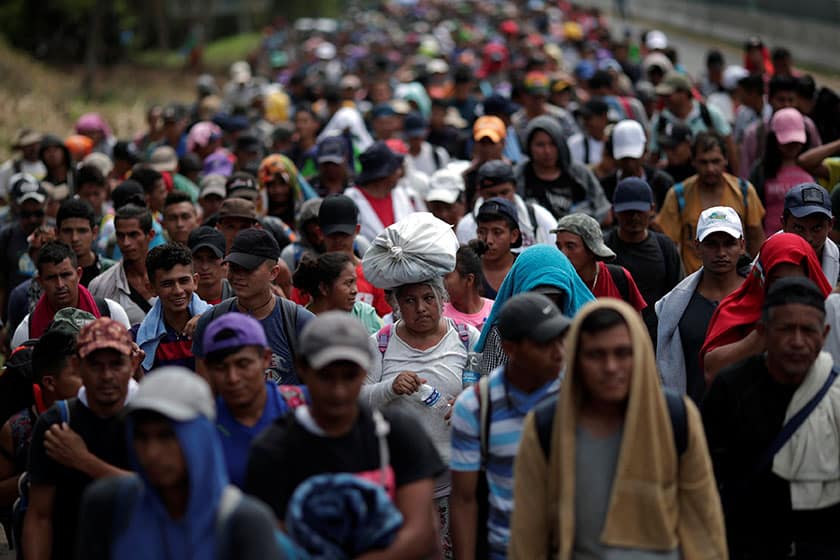 File photo: Migrants, part of a caravan traveling from Central America en route to the US.

The spread of populism and nationalism (grossly illustrated and propagated in the US mid-term elections) calls for explanations. Economic inequality is directly or indirectly implicated.

According to global data, more than 70 per cent of the world’s adults own less than $10,000 in wealth (all assets, income, savings, stocks, bonds, real estate, pensions etc). Their wealth covers just three per cent of all global wealth. On the other side of the spectrum, the world’s wealthiest people who constitute just eight per cent of the global population own 86 per cent of global wealth. With nearly 80 per cent of multimillionaires residing in the US and Europe, Western societies dominate the world’s share of wealth which is in the hands of a few. According to Forbes, just 10 of the world’s richest billionaires own over $500 billion in combined wealth.  This is greater than many countries’ annual GDP.

Wealth disparity within individual countries has reached epidemic proportions. In the last 25 years inequality within Western states has accelerated at such speed that it threatens to destabilise the very roots of democratic states by concentrating economic and political power in the hands of an oligarchic tiny minority of interests.

On current trends, the world’s richest one per cent will accrue $305 trillion and control as much as 64 per cent of the world’s wealth by 2030.  Existing inequalities, market fluctuations, austerity measures, accumulated savings and assets, stocks and shares, mutual funds, investments of large amounts of equity in special schemes and businesses, stocks and other assets all combine to provide the wealthy disproportionate benefits and open opportunities which see their wealth skyrocketing.

Whether it is cycles of austerity or economic growth, the wealthiest have it both ways. They continue to accumulate wealth at the expense of the rest of the population irrespective. Between 1980 and 2016 the wealthiest top one per cent absorbed nearly 30 per cent of the total world growth in contrast to the global bottom’s 10 per cent. The disproportionate accumulation of capital accentuates inequality not just in wealth but also in other spheres: race, health, gender, education, employment and life chances in general (e.g. infant mortality, discrimination and life expectancy). Inequality and blocked opportunities create a pool of disgruntled individuals and social casualties. They experience high levels of unemployment, poor education, social isolation and exclusion. Out of resentment and scaremongering and in desperation for competition for scarce resources, they turn to scapegoating and tribalism.

One explanation for this state of affairs is that economic inequality is a direct result of the exploitation of capital for surplus value (Yiassamine Mather). The wealthy move freely their capital to maximise their gains and conceal their profits in tax havens. Wealthy individuals, financial institutions, banks, hedge funds, giant transnational and insurance corporations shift and recycle wealth in such a manner that most of it remains hidden and preserved. It is then carefully and systematically rechannelled for more accumulation and more surpluses. The power of capital bestows on its owners the ability to influence market, social and political forces. They control the movement of labour and influence policy which promotes and increases social controls, challenges immigration and applies stiffer border controls.  Economic inequality is both a systemic consequence of the social relations of capital and what defines social divisions in society.

A second explanation considers the impact of structural changes. Automation, the collapse of traditional manufacturing industries, competition and free flow of labour, immigrants and refugees, weakening and disappearance of trade unions and organised labour, neo-liberal austerity measures, failing healthcare provision and a reduction in welfare support systems have created sharp social divisions between those who have and those who have not. The expanding economic insecurity and social exclusion experienced by the less fortunate increase popular anger and resentment and lead to an anti-establishment and xenophobic fervour.

The third explanation is that economic inequality plays in the hands of states and the wealthy (Frederick Solt). They deliberately encourage and promote populism and nationalism by instilling fear (e.g. immigration portrayed as an ‘invasion’) to create diversionary tactics (a sort of Trojan horse) that make citizens believe that their political, traditional and personal values are being threatened.  As citizens are preoccupied with these values they lose sight of economic inequality and fail to do something about it.

Finally, we have the theory that populism and nationalism, though linked to economic inequality, are actually a ‘cultural backlash’ (Ronald R. Inglehart and Pippa Norris). The thesis here is that increasing populism and nationalism are a reaction against ‘progressive cultural change’. It is a resentful counter-revolutionary ‘retro backlash’, especially evident amongst the older generation of white men, the less educated and religious and ethnic majorities. These groups consider that traditional values have been eroded and are being replaced by unacceptable and alien progressive values (e.g. multiculturalism, immigration, abortion, same-sex marriage, women’s rights and broader gender issues). This cultural backlash is a psychological state of mind that is guided by anti-immigrant attitudes, a suspicion of globalisation and the liberal establishment. It is characterised by a strong support for authoritarian values and tough-talking demagogic politicians who promise to reverse immigration, close borders, withdraw citizenships, restore the traditional values of the family and marriage and give the people their lost identity, jobs and security.

As the focus of this thesis is on cultural values, the diversionary aspect of politics comes into play. Populist and nationalist movements lose sight of the real social issues:  the structural problems of the economy which define their predicament, the risks arising from economic inequality and the perpetually widening gap between rich and poor. This diversion allows the established order and the underlying causes of social divisions to escape examination and to proliferate.

Considering the available empirical data, the diversionary and cultural backlash perspectives’ claim that populist and nationalist rhetoric, language and expression become more pronounced as societies become more unequal appears valid. However, such language and expression rarely refer to economic inequality per se. Rather, the personal and social consequences of inequality – lack of opportunities, job insecurity, poor education, the daily struggle to meet absolute and relative needs, exclusion, discrimination, fear and intimidation – all conspire to create a psychological vortex of frustration, despondency, bigotry and anger. These are then channelled and expressed as populist and nationalist feelings of disenchantment and a full cry for a return to the good old traditional values.

Though populist and nationalist values increase as inequality increases, any emerging social conflict is a more regular occurrence when inequality surfaces on a horizontal scale (between similarly placed but competing diverse social groups) rather than on a vertical scale (between higher-up and lower-down social groups). This may be explained by the fact that the wealthy elites succeed in remaining distant from the base of the social triangle. They stay out of reach whilst social groups, which are struggling for symbiotic existence further down the base of the social ladder, end up resenting, blaming and reacting against each other.

Populist and nationalist politics is about creating dissent. It is a divide and rule strategy of setting social groups at each other’s throat whilst the wealthy and the less visible or accessible reap the economic, political and social benefits.

Andonis Vassiliades is an emeritus professor.