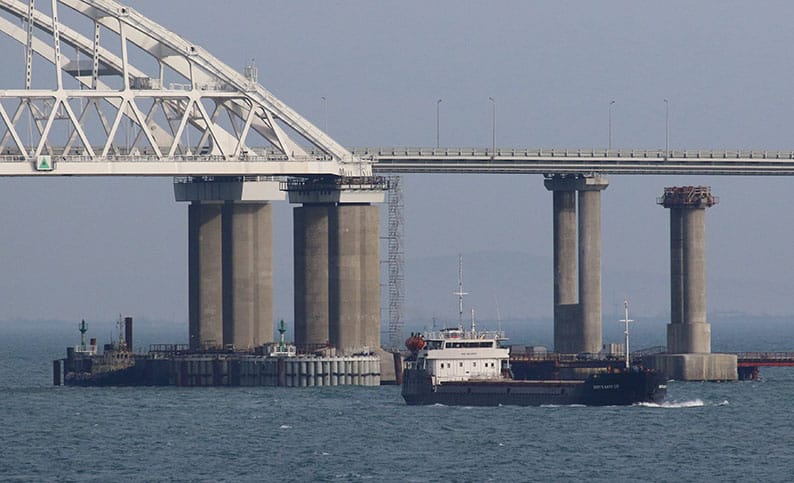 THE Russian-Ukrainian naval clash in the Black Sea is not going to end up in a world war. Ukraine would love to be part of NATO, but the existing members won’t let it join. Why? Precisely because that might drag them into a war with Russia.

Russia doesn’t have any real military alliances either. Various countries sympathise with either Ukraine or Russia, but none of them have obligations to send military help, and they are not going to volunteer.

Secondly, there’s not even going to be a full-scale war between Russia and Ukraine because Ukraine would lose. Russia has more than three times the population and its economy is ten times bigger. The Russian armed forces are far bigger and vastly better armed. No sane Ukrainian would choose an all-out war with Russia regardless of the provocation.

The Russians obviously have more options, but conquering Ukraine is probably the furthest thing from their minds. It has no resources they need, and if they occupied the country they would certainly face an ugly and prolonged guerrilla war of resistance. They have nothing to gain.

They actually have a lot to lose, because a full-scale invasion of Ukraine would trigger a Western reaction that would come close to bankrupting Russia. NATO would conclude that this was the first step in President Vladimir Putin’s plan to reconquer all of the former Soviet empire in Eastern Europe, and start re-arming in a very big way. The Russians would go broke if they tried to keep up.

They did go broke trying to keep up with Western military spending back in the Cold War, and in the end the entire Communist system collapsed. Russia is now a largely de-industrialised country with half the population of the old Soviet Union, and the collapse would come a lot faster – probably sweeping Putin away with it. He knows that, because he lived through the collapse last time.

So what we have here is really just a local crisis. The Russians started it in order to make a specific local gain, and they know that they can win. They will not face major Western retaliation because it’s just not a big enough issue.

The actual clash on Sunday saw three Ukrainians injured, 29 others arrested, and three Ukrainian navy ships boarded and seized. The ships were trying to pass through a Russian-controlled strait from the Black Sea to the Sea of Azov, a relatively shallow body of water (maximum depth 14 metres) that is about the size of Switzerland.

Until the Russians took Crimea from Ukraine four years ago, the strait had Russian territory on one side and Ukrainian territory on the other. A treaty signed in 2003 said that

both countries had free access to the Sea of Azov and their respective ports along its coasts, no permission needed.

In 2014, however, Russia infiltrated troops into Crimea who pretended to be a new local militia. They took control of the entire peninsula and its two million people, staged a referendum on whether it should become part of Russia, and won it. The Ukrainian government protested, but it didn’t have the troops or the nerve to resist the takeover by force.

Russia tried to justify its action by pointing out that the great majority of the people in Crimea spoke Russian, not Ukrainian, and that it has been part of Russia for centuries until a Soviet leader with strong Ukrainian connections handed it over to Ukraine in 1954.

International law does not accept border changes imposed by force as legitimate, and Russia has been under severe Western sanctions on trade ever since it annexed Crimea. Its economy is in serious trouble, but the annexation was immensely popular in both Russia and Crimea, and Putin will not reverse it.

Since there was no land connection between Russia and the Crimean peninsula, Putin decided to build an 18-kilometre bridge joining the two sides of the Strait of Kerch. By a happy coincidence, that would also give him the ability to control or even block shipping trying to get to Ukrainian ports on the northern coast of the Sea of Azov.

The bridge is now open, and Putin is exercising that option. The Ukrainians tried to send their (rather small) warships through to show that the treaty of free passage signed in 2003 still applies.

The Russians didn’t actually deny that, but said that they were closing the strait temporarily for operational reasons. The Ukrainian warships pushed on, and the Russians attacked them.

The Russians are legally in the wrong, but they are going to win this one because Ukraine had almost no navy left and nobody wants a bigger war. Ukraine has imposed martial law in areas that border on Russia for the next 30 days, but that’s mainly window dressing. There may be further sanctions against Russia, but that’s as far as it goes.

Manchester United and City through to last 16

Our View: Only way to get drivers to ‘Think’ is increase penalties