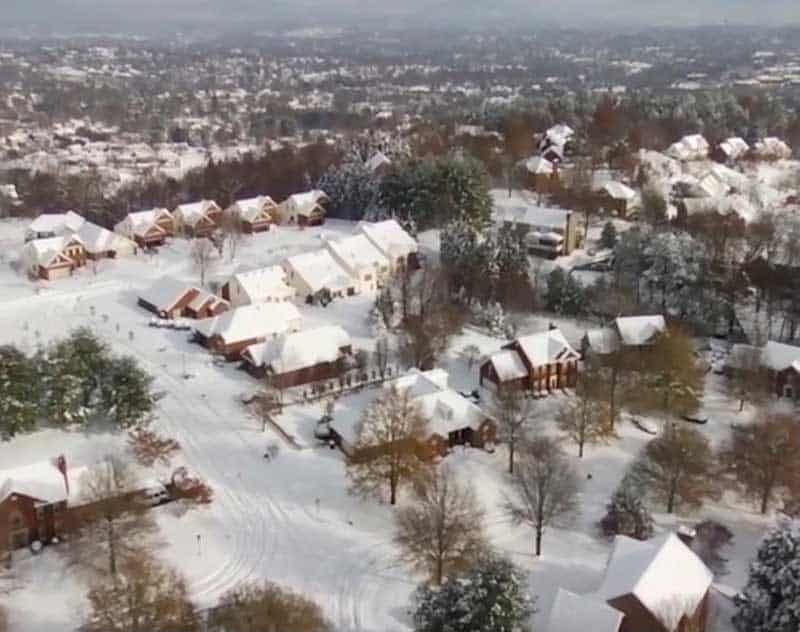 An aerial view shows snow in Cave Spring, Virginia, U.S., December 10, 2018, in this still image taken from a social media video. Mark Patterson/via REUTERS ATTENTION EDITORS - THIS IMAGE HAS BEEN SUPPLIED BY A THIRD PARTY. MANDATORY CREDIT. NO RESALES. NO ARCHIVES

At least three people had died and thousands of homes were left without power in the Carolinas and Virginia early on Tuesday after a storm dumped up to two feet of snow in parts of the southeastern United States.

One person died from a heart condition while en route to a shelter and a terminally ill woman died when her oxygen device stopped working, North Carolina Governor Roy Cooper’s office said in a statement. A motorist also died in southwestern North Carolina on Sunday when a tree fell on the vehicle, police said.

More than 76,000 customers remained without electricity in the region early Tuesday, down from a high of 220,000 on Monday, Poweroutage.us reported. Weather warnings remained in effect.

“The danger is black ice, ice that’s difficult to see on roads, caused by the re-freezing of snow melt,” said David Roth, a forecaster with the National Weather Service’ Weather Prediction Center in College Park Maryland.

“It’ll be a risk for the next few mornings, probably through Thursday morning, before we see persistent temperatures above freezing in the area,” he said.

Temperatures were expected to rise above freezing by late morning but will drop back below freezing overnight through Thursday, Roth said. By Friday, temperatures should reach into the 50s Fahrenheit in North Carolina east of the mountains when there is a chance of rain.

No widespread flight delays were reported early Tuesday by the major airports in the southeast, according to the flight-tracking website FlightAware.

The storm, at its height, prompted the cancellation of one in four flights into and out of Charlotte/Douglas International Airport, the sixth-busiest in the country, and other airports across the region, FlightAware said.