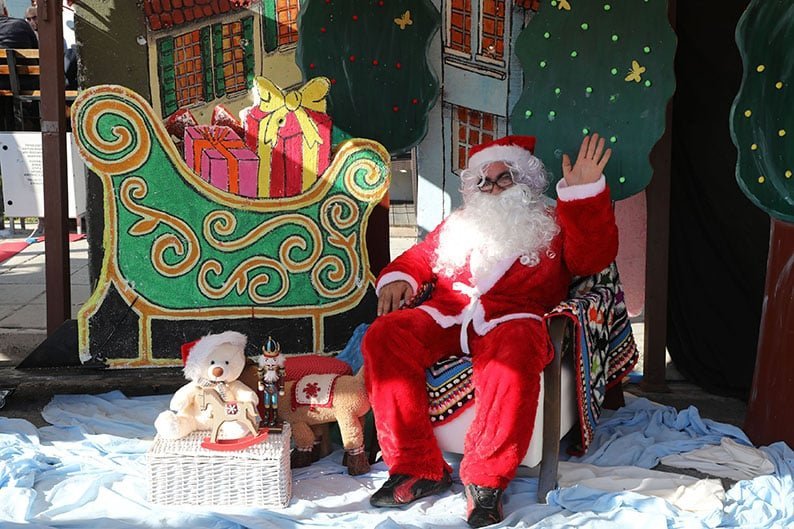 Are any of these statements true? If you are not sure – and also if you think you are – read on.

The easy answer first. No, there is indeed no Santa Claus in Cyprus. What there may be is Ayios Vassilis, a saint similar to Santa Claus but not quite the same.

The man we know as Santa Claus today is thought of mainly as the jolly fat man in red with a white beard who often appears in shopping malls.

Where does he come from? That depends.

One version has it that he was a bishop who lived in the fourth century in a place called Myra in Asia Minor, now Turkey. He was a very rich man because his parents died when he was young and left him a lot of money – most of which he gave away.

The European Santa Claus comes from a Finish village, Korvatunturi in Lapland, hence the reindeer which travels from there to bring presents.

The story of Ayios Vassilis or Saint Basil resembles the one of the Western Santa Claus, but he was certainly not from Finland. Saint Basil was aiding the poor and needy while he was bishop in Caesarea, a town in Israel.

He died on January 1, 379 AD, and the Greek Orthodox Church traditionally celebrates his memory on January 1. This is why in Greece Ayios Vassilis brings presents on New Year’s Eve and not on Christmas Day as happens elsewhere.

Ayios Vassilis was far from chubby; according to reports he was a tall, thin man with a black beard and black penetrating eyes.

This got lost in time. For commercial reasons, there is now no apparent difference in his appearance to that of Santa Claus, so maybe it doesn’t matter if we are talking about Ayios Vassilis, Santa Claus, not to forget St Nicholas and Sinterklaas, the Dutch version.

Though St Nicolas and Sinterklaas are also different, and for very different reasons.

Besides generally giving away lots of money he inherited and helping the poor and sick, St Nicholas is said to have saved three poor sisters from becoming prostitutes – arguably not in itself a matter of great importance since it happened a long time ago, but because countless European children still benefit every year from how he is said to have done that.

Here is what (maybe) happened: Since a poor man lacked the money to marry off his three daughters, he was forced to send his children into prostitution. When Nicholas learned about it, he threw gold through the daughters’ bedroom windows for three consecutive nights, saving them from this terrible fate. Legend has it that the gold landed in the girls’ boots. Thus, the custom of filling children’s boots with sweets and small presents arose on the night of December 6, the day of Nicholas’s death.

Nowadays, countless children still polish their boots and place them outside the night before this date every year, eagerly awaiting sweets and small presents. They are rarely disappointed, as St Nicholas awards all children who have not been naughty.

He is extremely popular in the Netherlands, as is Sinterklaas. The reason why Sinterklaas is in a class of his own is that nowadays a huge controversy surrounds him – or rather his assistants.

Sinterklaas is assisted by many Zwarte Piet (‘Black Pete’); helpers with black faces in colourful Moorish dress. They are typically depicted carrying bags which contains candy for the children, which they toss around, another story based on St Nicholas saving the young girls. This legend has it he was simply tossing golden coins through their window.

Traditionally Zwarte Piet’s face is said to be black because he is a Moor from Spain. Today, some prefer to say that his face is blackened with soot because he has to climb through chimneys to deliver gifts for Sinterklaas.

The figure of Zwarte Piet is considered by some to be racist and associated with slavery. Accordingly, the traditions surrounding Sinterklaas have been the subject of numerous debates, documentaries, protests and even violent clashes at festivals.

What happened to these guys? (no woman among them, probably as women rarely inherited much money in those days)

Nothing much for a long time, until buying stuff in shops became popular. According to educational website ThoughtCo:

“Shops in the US began to advertise Christmas shopping in 1820, and by the 1840s, newspapers were creating separate sections for holiday advertisements, which often featured images of the newly-popular Santa Claus.

In 1841, thousands of children reportedly visited a Philadelphia shop to see a life-size Santa Claus model. It was only a matter of time before stores began to attract children, and their parents, with the lure of a peek at a ‘live’ Santa Claus.

In the early 1890s, the Salvation Army needed money to pay for the free Christmas meals they provided to needy families. They began dressing up unemployed men in Santa Claus suits and sending them into the streets of New York to solicit donations.”

Since all these are just guys in costumes, why do we, and here I mean the grown-ups, like these dressed-up kind men who hand out gifts around at Christmas and pretend we believe in them? (I do, of course, simply mean these guys, there may well be a real one somewhere, in Lapland or…)

“We need to pick on something that makes sense which is universally acknowledged as real to make sense of our finite lives,” author Eric Kaplan writes in his book ‘Does Santa exist?’

“In shopping malls where behaviour is on public display, people are continually shaping and confirming their social identities”, the study ‘Santa Claus at the Mall’ concluded. “Adult behaviours varied widely, but in the presence of children, both males and females promoted the Santa Claus fantasy. In the mall setting, where one’s social identity is subject to public scrutiny, interactions with Santa help define, reinforce, and confirm one’s sense of self.”

Is it a sign of the times we live in? Contemporary philosopher Slavoj Zizek for one believes it is. According to him, we no longer really believe today, we just follow some rituals as part of the lifestyle of a community. “I don’t believe in it, it’s just part of my culture’ effectively seems to be the predominant mode of the disavowed / displaced belief characteristic of our times. What is cultural lifestyle, if not the fact that, although we don’t believe in Santa Claus, there is a Christmas tree in every house, even in public places, every December?”

That is what the grown-ups have to say. What about the children, in whose name all this is done?

Of 161 parents in the United Kingdom, 92.5 per cent thought Father Christmas was real for their children up to the age of 8, according to a research paper presented at the annual meeting of the European Early Childhood Education Research Association in Finland in 1999.

It turns out that the more live Santa Clauses children are exposed to, the more likely they are to believe that he is the ‘real’ Santa, a study published in 2016 in the journal Cognitive Development found.

So, the more the merrier for the young ones it seems. Ho Ho Ho!

Away in a manger

Archbishop: rules out ‘solution at any cost’