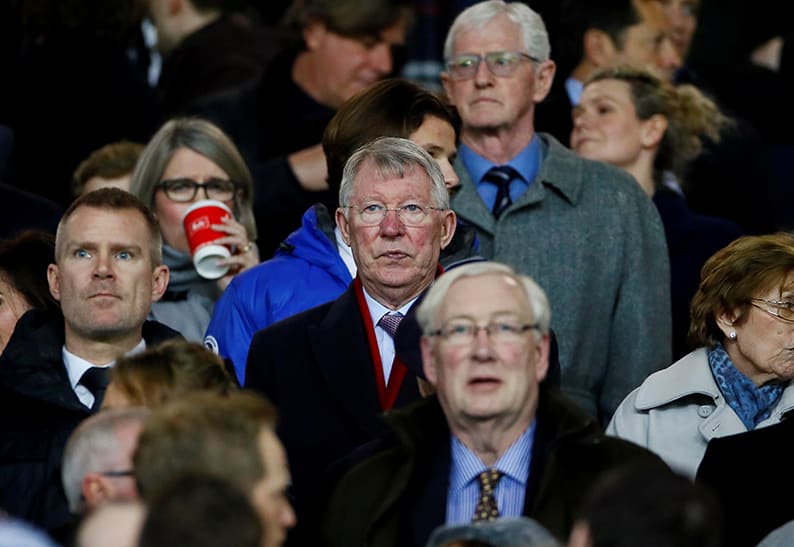 Sir Alex Ferguson in the stands

Ole Gunnar Solskjaer accepts Manchester United’s quest for FA Cup glory will have to be earned “the hard way” as he prepares for a fifth-round clash at Chelsea on Monday.

United’s reward for overcoming Arsenal at the Emirates Stadium in the last round is a second trip to London to take on another of their Premier League top-four rivals.

But Solskjaer pointed out that the first of his two triumphs in the competition as a player – as part of United’s memorable treble in 1999 – was equally as onerous.

United’s interim manager said: “In ’99 we beat them down at Stamford Bridge to get to the final. And we beat Arsenal and Liverpool as well.

Solskjaer suffered his first defeat in his 12th match as United caretaker in midweek after Paris St Germain clinched a 2-0 win in the first leg of their Champions League last 16 fixture.

Unless they stage a remarkable comeback at the Parc des Princes in the second leg then the FA Cup will be the only chance Solskjaer has of winning silverware.

The Norwegian will be without key pair Jesse Lingard and Anthony Martial at Stamford Bridge – both of whom suffered injuries against PSG – and is not about to take Chelsea lightly despite two humiliating away defeats recently.

Solskjaer was in attendance as the Blues were hammered 6-0 by Manchester City last Sunday, a loss that came less than two weeks after a 4-0 humbling at Bournemouth.

Solskjaer added: “I went to see them against City and City were clinical, of course. But they’ve got some fantastic players, Chelsea as well.

“They could have scored two or three easily in the first half as well in that game. There are fine margins. They could easily have been two or three up against Bournemouth as well when they lost 4-0.

“It’s those little things that decide games. They have been up and down, but down there they’re a tough team to play.”

United paid a then British record £59.7million for the Argentinian in August 2014 and have since spent heavily on the likes of Paul Pogba, Martial and Romelu Lukaku.

The trio have had varying degrees of success and, when asked whether United’s challenge was not their outlay but finding a way to accommodate all their talent, Solskjaer responded: “You want to get the best out of your best players, of course.

“That’s a challenge all the time because we’ve got so many players. You don’t just put every single good player in their preferred position, we need to have a system that we start from.

“But there are a couple of players that you might want to build your team around.”