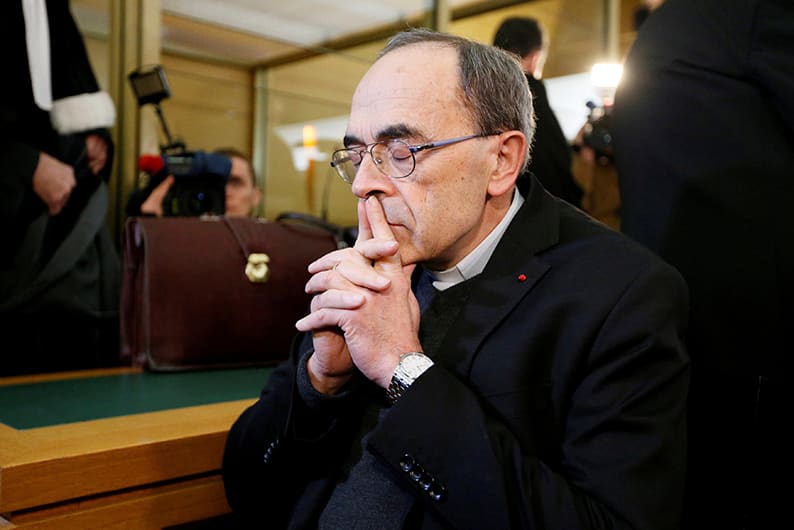 Cardinal Philippe Barbarin, Archbishop of Lyon, arrives to attend his trial, charged with failing to act on historical allegations of sexual abuse of boy scouts by a priest in his diocese, at the courthouse in Lyon

A high-ranking French Catholic cleric, Cardinal Philippe Barbarin, was convicted on Thursday of failing to report allegations of sexual abuse in his diocese and said he would submit his resignation to Pope Francis.

Barbarin, archbishop of Lyon and the highest-profile cleric to be caught up in the child sex abuse scandal inside the French Catholic Church, was handed a six-month suspended prison sentence.

The court in Lyon ruled that between July 2014 and June 2015 Barbarin covered up allegations of sexual abuse of boy scouts in the 1980s and early 1990s by a priest who is due to go on trial later this year.

Barbarin was not present for the verdict but his lawyer, Jean-Felix Luciani, told reporters he would appeal the ruling.

Barbarin denied concealing allegations that Father Bernard Preynat abused dozens of boys more than a decade before he arrived in the Lyon diocese in 2002.

Preynat has admitted sexual abuse, according to his lawyer.

Barbarin told a brief news conference he would travel to the Vatican to meet Pope Francis in the next few days and resign. The victims and their families were in his prayers, he added.

There was no immediate word from the Vatican on whether Francis would accept the resignation, which could remove Barbarin from his post as archbishop but leave him with the rank of cardinal.

Prosecutors in Lyon had previously investigated Barbarin but dropped the probe in mid-2016 without a detailed explanation. However, an association of alleged victims called Parole Liberee (Freed Word) used a provision of French law to compel the cardinal to stand trial.

“This will send a strong message to the Church and to the pope,” said abuse victim Francois Devaux, applauding the verdict.

Barbarin’s trial put Europe’s senior clergy in the spotlight at a time when the pope is grappling with criticism over the Church’s response to a sexual abuse crisis that has gravely damaged its standing around the globe.

Francis ended a conference on clergy abuse of children last month with a call for an “all-out battle” against a crime that should be “erased from the face of the earth”. Victims said the pope had merely repeated old promises and offered few new concrete proposals.

Barbarin told the trial he only became aware of Preynat’s abuses in 2014 after a conversation with one victim. Before that, he said, he had only heard rumours. He removed Preynat from his post a year later, when the allegations became public.

The scandal is the subject of Francois Ozon’s film “Grace A Dieu” (By The Grace Of God) which won the Silver Bear Grand Jury Prize at the Berlin International Film Festival last month.

Long-lost Caravaggio painting to be auctioned