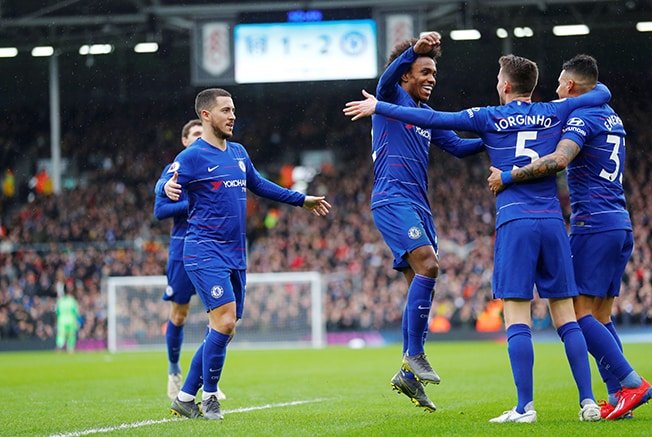 Chelsea manager Maurizio Sarri is confident he will be at Stamford Bridge next season and has already begun his pre-season preparations.

The Italian came under heavy pressure last month after Premier League thrashings at Bournemouth and Manchester City were followed by a disappointing FA Cup exit at home to Manchester United.

Sarri’s side have since produced a positive performance in their penalty shoot-out defeat to City in the Carabao Cup final and won successive league games against London rivals Tottenham and Fulham.

Asked about his job security, the former Napoli coach, who moved to Stamford Bridge on a three-year contract last summer, replied: “It’s not a big problem. The problem is the results. All the rest is not important at this moment.

“I want to win for the team, for the club, not for me. It’s not important.

“But I want to think only to our performances and our results. Nothing else.

“It’s not important if I’m here next season.”

Chelsea host Dynamo Kiev in the first leg of their last-16 Europa League tie on Thursday evening before Wolves travel to Stamford Bridge on Sunday.

Sarri is considering making changes to his team for the Kiev game due to tiredness in his squad.

He echoed the concerns of Tottenham boss Mauricio Pochettino about English clubs being at a disadvantage in European competitions due to punishing schedules.

“I think the Premier League could do something more for the teams involved in European competitions,” he said.

“If you play in the Europa League in Italy, after the match away you can ask to play on Monday.

“For example, when we will play in the Premier League after 62 or 63 hours after the match against Dynamo Kiev. I think it’s too early.”

The Blues sit sixth in the top flight, two points behind fourth-placed Manchester United, with a game in hand.

Winning the Europa League would guarantee the club return to the Champions League next season, but Sarri is still hopeful of qualifying for the premier competition with a top-four finish.

“I think we can gain the spot in the Champions League in the Premier League,” said Sarri.

“We are fighting. We are only two points away, at the moment, and have to play one match (in hand).

“But the Europa League is a very important competition, the second in Europe, an important trophy with a spot for the Champions League.

“So it’s a very important target for us.”

Sarri, who has no injury concerns ahead of the two-legged tie which concludes in Kiev next week, expects a tough test from the Ukrainian runners-up.

“The two matches will be very difficult. They are a good team, a physical team and a young team, very dangerous on the counter-attacks with two very fast wingers,” he said.

“So we need two very good performances, I think. Our target is to play the same football at home and away.”

Huawei sues US government, saying ban on its equipment is unconstitutional