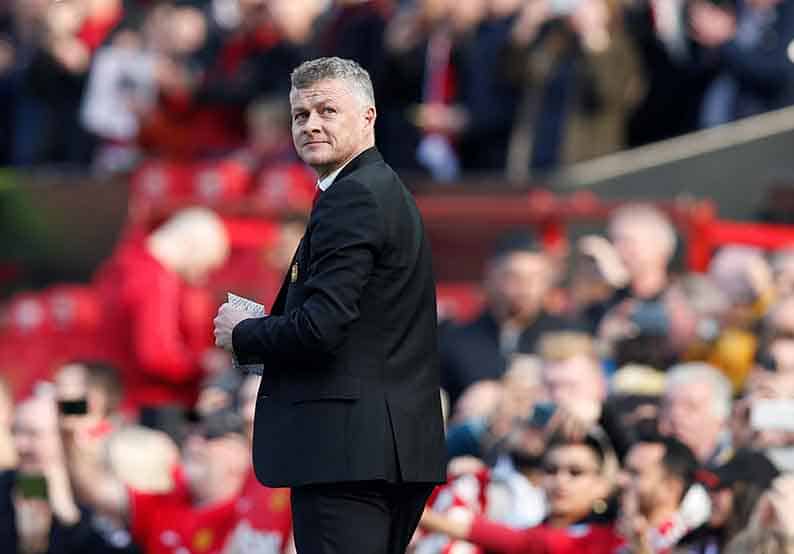 Ole Gunnar Solskjaer was made to sweat for his first win as permanent manager as sluggish Manchester United rode their luck against Watford.

Two days after the caretaker position became a full-time post, Jose Mourinho’s successor was unable to put on a show for the Old Trafford faithful as the high-flying Hornets threatened to ruin the Norwegian’s day.

Watford were on top for large patches as they pushed for a first league win at Old Trafford, but Javi Gracia’s men were unable to take their chances as Marcus Rashford and Anthony Martial netted in a 2-1 triumph.

Abdoulaye Doucoure scored late on for the impressive visitors and the manner of Saturday’s performance underlined just why Solskjaer wrote in his programme notes that “now the hard work starts for all of us”.

Still, this was a welcome boost after back-to-back defeats before the international break for United.

Watford, a week out from their FA Cup semi-final at Wembley, started both halves on top but their superior number of shots counted for little against their more clinical opponents.

Luke Shaw won the ball and produced a superb pass for Rashford to coolly open the scoring in the 28th minute, while the Hornets’ second wave on top ended when Martial turned home from close range.

The Old Trafford faithful chanted Solskjaer’s name with gusto from the start, when the newly-appointed manager was greeted by a huge ’20LEGEND’ banner in the Stretford End.

But the feel-good factor was nearly undone by Watford, who started in the ascendancy against a United side lacking coherence and sharpness.

Doucoure’s shot wide in the sixth minute was an early warning for a United side struggling to find their feet, with David De Gea doing well to push a Troy Deeney header away from danger.

Solskjaer’s side were looking cumbersome, with Rashford ploughing a lonely furrow in attack as Roberto Pereyra and Gerard Deulofeu threatened at the other end.

But every missed Watford chance was giving the home side hope and they clicked into gear impressively in the 28th minute.

Shaw smartly took the ball off Deeney and burst down the left flank. Guilty of a dreadful cross when trying to find Rashford earlier in the half, the full-back made amends by putting him behind the Watford back line with a superb ball that the forward coolly lifted past the onrushing Ben Foster.

There would have been a second within four minutes had former United goalkeeper Foster not stopped Martial’s close-range effort, while Rashford was just unable to find the Frenchman after rounding the shot-stopper.

Solskjaer’s Red Devils ended the opening period on top but looked poor when play resumed for the second half as Watford went up a gear.

Deulofeu, Daryl Janmaat and Pereyra had attempts, with Will Hughes going close with a curling effort before Kiko Femenia tried his luck from distance.

Deeney had an audacious effort after Solskjaer turned to Jesse Lingard and Andreas Pereira in a bid to change the dynamic of the match in the 63rd minute.

United did not immediately improve but the changes did eventually have an impact.

Pereira played the ball down the line to Lingard, whose cross Foster could not gather under pressure as Martial reacted quickest to scoop home.

There were suspicions of offside about the goal that took the sting out of proceedings, but Doucoure still managed to give the visitors late hope.

Deeney stepped over the ball as the midfielder collected a pass back from Isaac Success and slotted past De Gea. It was a lovely goal but merely a consolation effort.

Huddersfield Town became the second team of the Premier League era to be relegated before the end of March after a 2-0 defeat by Crystal Palace away meant they slipped 19 points from safety with six games remaining.

Wins for 17th-placed Burnley and Southampton in 16th sealed Huddersfield’s fate, as they matched Derby County’s record, set in 2008, for the earliest relegation from the Premier League after 32 games.

Burnley moved five points clear of the Premier League’s relegation zone after an early Conor Coady own goal and a late Dwight McNeil strike gave them a 2-0 home win over Wolverhampton Wanderers on Saturday.

The result left Burnley 17th on 33 points from 32 games, five more than 18th-placed Cardiff City who have two games in hand and host sixth-placed Chelsea on Sunday.

Could the audit-general please answer some questions for Pissouri residents?