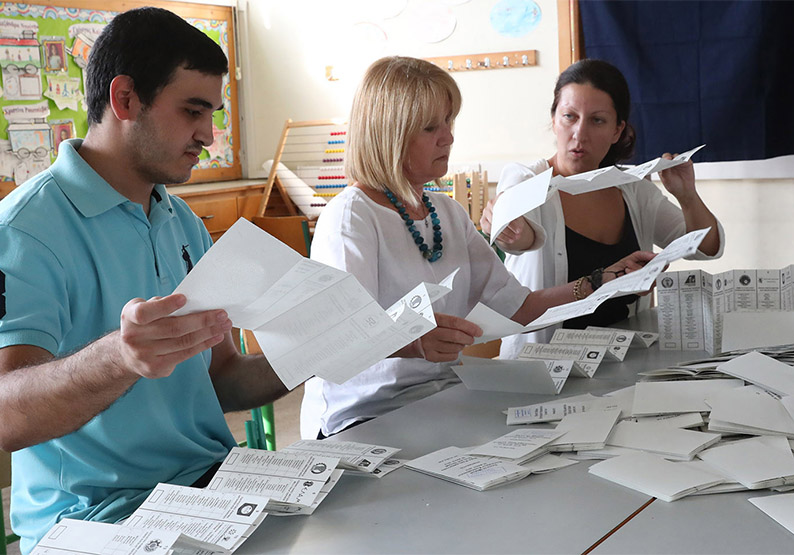 Counting the ballot papers during Sunday's election that saw Elam's share of the vote rise to 8.25 per cent

Like some of its European counterparts, nationalists, Eurosceptics, and the far-right, the National People’s Front (Elam) saw a surge in voters on Sunday, almost tripling its support compared with the 2014 Euro elections, and doubling its percentage share since the 2016 Cyprus parliamentary elections.

Although overall, the party came in fifth out of 13 parties with 8.25 per cent of the vote or 23,167 votes, and will not be going to the European Parliament, Elam’s share of the vote in Paphos reached 12.08 per cent and as high as 15.24 per cent in the Famagusta district.

Polls ahead of Sunday’s ballot had indicated that Disy was haemorrhaging supporters to Elam and that as many as 5 per cent of Disy voters could end up turning to the nationalist party. This appeared to be borne out as Disy support fell to 29 per cent on Sunday compared with the 37.75 per cent it received in the 2014 European elections, whereas rivals Akel gained ever-so slightly over the previous Euro ballot.

“We recognise that society has sent a message not only to the government side, but overall to the political system,” said Disy leader, Averof Neophytou.

“The rise of the nationalist party, even if it has not elected a MEP, can only be a worry. You have to listen to society and to address the cause of the ‘birth’ of this phenomenon. As the Democratic Rally we will analyse seriously the election results and where required we will proceed with any changes needed.”

A similar concern was expressed by Akel leader Andros Kyprianou.

“We express our satisfaction that voters have blocked the path of the far right towards the European Parliament,” he said.

“However, we note with concern the numbers recorded by Elam. Now everyone has to take on his responsibilities,” he added, referring to what failures might be evident within the political system that was leading to the rise of such nationalist parties.
A spokesman for Elam, speaking after the final results on Sunday night, thanked “the thousands of people who supported the party”.

“The whole political system has launched an attack on our party,” he said. “Our struggle was never electoral and you can expect us to be more united and stronger than ever before.”

Responding to the above post, others commented that “indeed, most Elam voters are old village people, who still think we’re at war. If anyone sat down and talked to them, they might change their vote, but no one does so.”

Another post added: “For anyone who hasn’t understood this yet, Elam did not lose, it got over 8 per cent. It just didn’t secure a MEP.”

Others said this aspect should be celebrated, as it deprived the party of significant funding. But another responded: “Without wanting to downplay the significance of Elam’s failure to get a MEP seat, we still hear far-right rhetoric from other parties including Edek, which managed to secure the seat.”