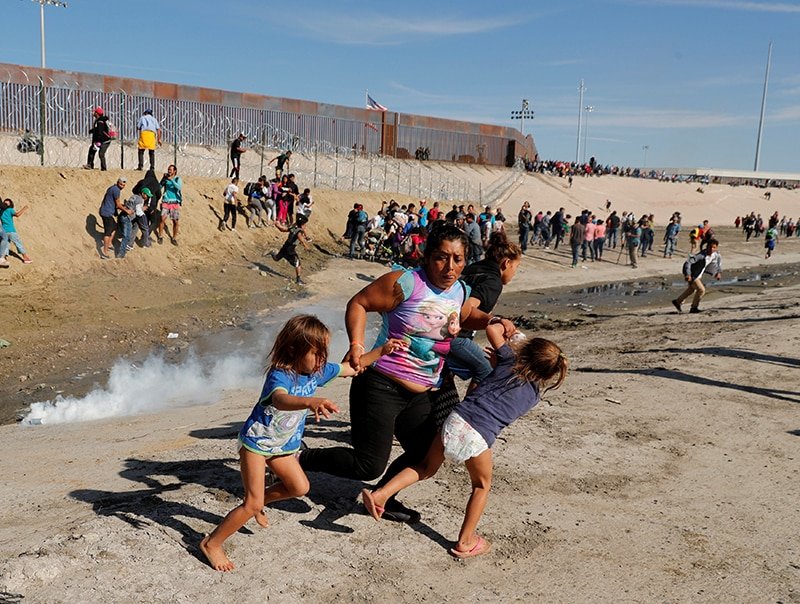 File photo: A migrant family, part of a caravan of thousands traveling from Central America en route to the United States

Central American migrants eager to beat a crackdown by Mexico on its southern border with Guatemala scrambled into the country on Thursday as the government prepared to send thousands of National Guard members to plug gaps in the porous frontier.

Mexico has agreed with the United States to demonstrate by late July that it can contain a surge in U.S.-bound migrants, following a threat from U.S. President Donald Trump to impose tariffs on Mexican goods if it failed to do so.

Foreign Minister Marcelo Ebrard said this week that Mexico would beef up control of its southern border, including sending 6,000 members of the National Guard. The deployment was due to begin on Wednesday though witnesses saw no signs of the deployment.

As dawn broke on Thursday, a family of Honduran migrants floated across a narrow crossing of the Suchiate River from Guatemala on a raft and staggered onto Mexican soil.

“They told us that they were deploying the National Guard,” said Melvin Ochoa, 28, carrying his 20-month-old daughter. Beside him was his heavily pregnant wife. “It made us hurry. I’m pushing to continue faster so they won’t catch us.”

The trip was especially risky for Ochoa’s wife who was only one month shy of giving birth. She declined to give her name.

“But the risks at home were worse,” Ochoa said, explaining that the family had fled loan sharks affiliated with a criminal gang who demanded money even after they had paid them back.

“If not, they were going to kill us.”

Behind them, the steady daily traffic of the river continued unabated, with no Mexican official in sight. Migration officials remained in the shadow of immigration posts on a bridge linking the two countries.

Improvised rafts made of planks of wood floating on giant inner-tubes carried black-market Corona beer, coffee and other contraband toward Guatemala. Half a dozen more floated toward Mexico crowded with Central Americans fleeing gang violence and poverty.

It was business at usual too at immigration checkpoints along the highway north.

“We haven’t seen any increase,” said a police officer at a checkpoint, when asked about any build-up in security forces. He asked not to be identified because he lacked permission to speak to the press.

Mexico and the United States brokered an immigration agreement last week to prevent Washington from imposing tariffs starting at 5% on Mexican goods. The Mexican government has agreed to consider changing its migration laws after 45 days if it proves unable to stem the flow of people.

The standoff over the border has piled pressure on Mexico’s leftist President Andres Manuel Lopez Obrador. He has called for national unity, describing the tariff threat as unfair, but vowing to avoid confrontation with the United States, Mexico’s largest trading partner.

Threatening to raise tariffs on Mexican imports as high as 25%, Trump wants Mexico to accept asylum seekers as part of his effort to slow the flow of migrants and to relieve pressure on stretched U.S. border and immigration authorities.

Mexico in December agreed to start taking in mostly Central American asylum seekers while their cases are being heard in the United States and absorbed about 10,000 during the first few months of this year, according to the Mexican government.

However, under the deal struck last week, tens of thousands could be sent back to Mexico before the end of this year, putting increased pressure on Mexican migration authorities, said Deputy Interior Minister Alejandro Encinas.

“This has become a national problem,” he told Reuters.

‘AS FAR AS GOD PERMITS’

Mexico sends around 80% of its exports to the United States so any move by Trump to impose levies on its goods would have serious repercussions for the economy, which is already struggling after contracting in the first quarter.

Given that the United States had never managed to properly seal its own southern border, the chance of Mexico doing any better were extremely remote, said Andres Rozental, a former Mexican deputy foreign minister responsible for North America.

“We’re never going to be able to get what presumably Mr. Trump wants in 45 days,” Rozental told Reuters.

Complicating the deployment of the militarized police force along the border is the fact that the National Guard was only formally created a few weeks ago, and Lopez Obrador’s six-month-old administration is still finding its feet.

For some migrants, those issues are of small consequence.

“We have no plan. Only to go forward, as far as God permits,” said Antonio Hernandez, 29, stepping off another raft at dawn with his wife and 2-year-old son. Anxious and exhausted from days of travel since they fled El Salvador, they hustled on.