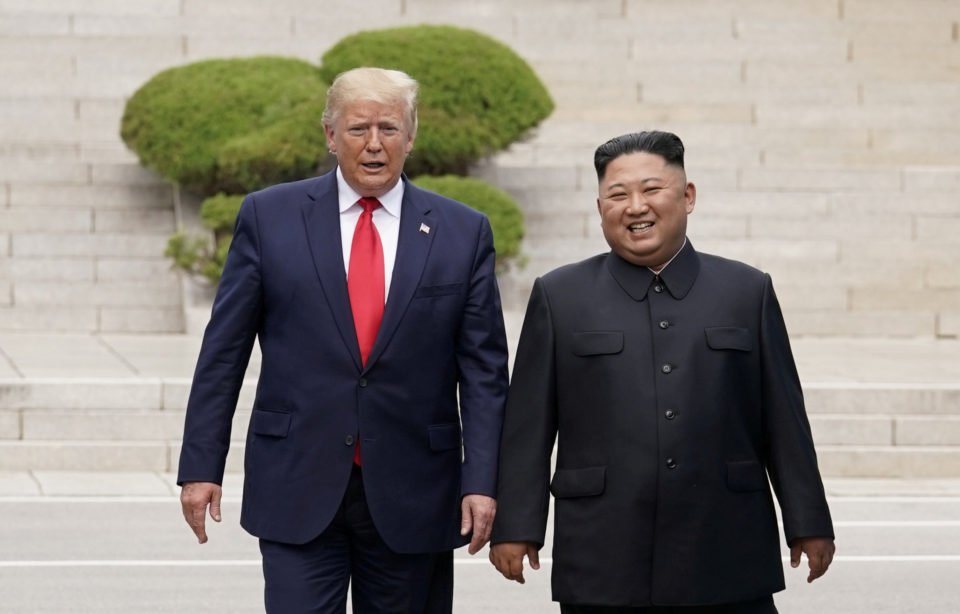 A new public broadside by North Korean officials against US-backed sanctions highlights the tough road ahead as negotiators prepare for talks in the wake of Sunday’s meeting between US President Donald Trump and North Korean leader Kim Jong Un.

Media reports out of Washington have suggested the Trump administration may be willing to seek a partial deal to dismantle at least part of North Korea‘s nuclear programme.

But ahead of what would be the first significant talks since Trump and Kim failed to reach a deal at a summit in February in Hanoi, analysts say progress is unlikely unless Washington is prepared to ease some sanctions.

North Korea‘s exports to China, its main market, dropped nearly 90 percent last year, according data from Beijing, and a report this week by the Seoul-based Korea Development Institute said sanctions had put the country on a path for economic crisis.

“North Korea wants actions, not words,” said Christopher Green, a Korea expert at the International Crisis Group. “I’m not sure the US is mentally ready for it, even now.”

After Trump met with Kim at the Demilitarised Zone (DMZ) between the two Koreas, US Secretary of State Mike Pompeo told reporters a fresh round of negotiations with North Korean foreign ministry diplomats will likely happen “sometime in July”.

Ahead of February’s failed summit in Hanoi, American officials had raised the possibility that while sanctions would remain, they might be willing to take interim steps such as boosting humanitarian aid or opening liaison offices.

US officials, however, rejected North Korea‘s offer to dismantle its reactor complex at Yongbyon in exchange for wide-ranging sanctions relief.

Since then, North Korea has only doubled down on its calls for sanctions to be withdrawn, signalling that while lesser steps might be welcome, they would not be enough to persuade Pyongyang to give up nuclear assets.

“Our state is not a country that will surrender to the US sanctions,” a North Korean foreign ministry official said in a statement last week.

A New York Times report that suggested American officials would settle for a nuclear freeze by North Korea was criticised by national security adviser John Bolton who said the idea had not been discussed at the National Security Council.

The disagreements between officials at the NSC and US State Department over whether to maintain a hard line or take a step-by-step approach are “creating a discordant policy line,” Green said.

North Korea‘s mission to the United Nations on Wednesday criticised the United States as “obsessed with sanctions and pressure campaign” and accused it of being “more and more hell-bent on hostile acts” against Pyongyang.

A report this week by the North Korea Risk Group concluded there is “significant motivation for both sides to seek to reach an agreement,” and that Trump and Kim may be more compelled than ever to seek an interim deal.

“This is because a third failure – which cannot be ruled out – would prove deeply problematic for both leaders at this stage,” the report said.

But unless the US decides sanctions are on the table, even a smaller deal may be hard to seal, analysts said.

“A freeze on fissile material, nuclear weapons, and missile production at Yongbyon and beyond — when North Korea does not even acknowledge enrichment facilities outside Yongbyon — without some sanctions relief, seems unlikely,” said Vipin Narang, an associate professor of political science at Massachusetts Institute of Technology.

If Washington sticks to its stance of no sanctions relief until North Korea gives up the proverbial keys to its nuclear kingdom, than Trump’s latest meeting with Kim “may be remembered as the last gasp of a strategy that was predictably doomed,” Narang said.

“The idea of a more flexible negotiating position that’s comprehensive in scope but step by step in implementation is welcome, but the scope and sequence of each reciprocal step still has to be realistic,” he said.

On the other side, US intelligence officials have said it is unlikely Kim intends to ever give up his entire nuclear arsenal.

To find a compromise, each side may have to drop the ongoing “good cop, bad cop” cycle of engagement and threats, Narang said.

“If we are hoping for a deal, the good cops on both sides will have to sideline their internal bad cops.”