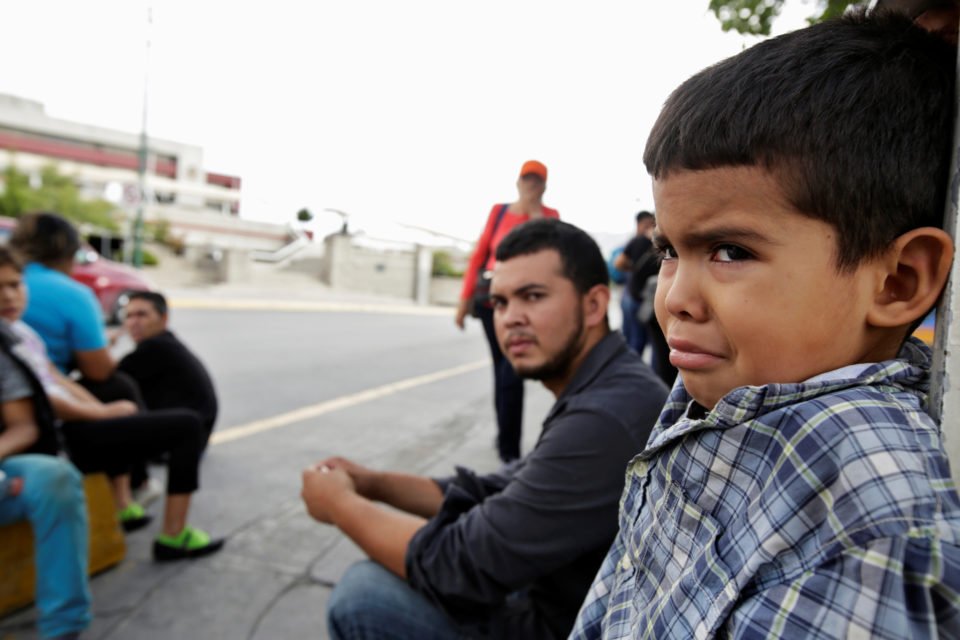 A Honduran migrant boy reacts next to his father after their return to Mexico from the U.S. under the Migrant Protection Protocol (MPP) to wait for their court hearing for asylum seekers, in Ciudad Juarez, Mexico July 18, 2019. REUTERS/Jose Luis Gonzalez

U.S. President Donald Trump‘s administration pushed ahead with its attempts to crack down on migration at the southern border on Monday, defending in court a virtual ban it imposed on asylum seekers and issuing its second sweeping order within a week.

A U.S. district judge in Washington heard arguments about whether to temporarily strike down the first new rule, which is designed to bar almost all immigrants from applying for asylum at the country’s southern border.

The Trump administration unveiled the rule a week ago as part of an effort to end what it has called fraudulent asylum claims from an increasing number of migrants, mainly from the impoverished and violence-plagued Central American countries of Guatemala, Honduras and El Salvador, who pass through Mexico on their way to the United States.

Judge Timothy Kelly in the U.S. District Court for the District of Columbia withheld ruling on whether to issue a temporary restraining order to block the rule on asylum seekers pending a trial, saying he would make that decision soon.

Justice Department lawyer Scott Stewart told the judge that a temporary restraining order would prompt a dangerous surge on the border from migrants seeking to get into the United States while the case was being heard.

The suit was brought by the Capital Area Immigrants’ Rights Coalition. The American Civil Liberties Union (ACLU) has filed a similar suit in federal court in California, due for a hearing on Wednesday.

As the asylum rule faced its first court fight, the Trump administration on Monday unveiled a new regulation that would order expedited deportations for tens of thousands of people who could be deprived of a review by an immigration judge.

“For the past two and half years there has been one attack after another on immigrants but the pace has increased beyond anything we have seen just in the past few weeks,” said Lee Gelernt, deputy director of the ACLU’s Immigrants Rights Project.

Ahead of a presidential race in 2020, Trump is seeking to show voters he has carried out pledges to take a tough stance on illegal immigration. Voters sent him to the White House in a 2016 campaign in which he promised to build a border wall and ban immigrants from predominantly Muslim countries.

Democrats have blasted the policies as cruel, faulting the Trump administration for warehousing migrants in crowded and unsanitary detention facilities along the border and separating immigrant children from the adults with whom they had traveled.

The ACLU, which has filed suit to block numerous Trump immigration policies in court, vowed to challenge the expedited deportations as well.

The Trump administration has had mixed results trying to implement its most restrictive immigration policies. It had to revise its attempt to ban most people from certain predominantly Muslim countries multiple times before the courts would allow it.

The acting head of U.S. Customs and Border Protection is presuming the latest restriction on asylum will get rejected by the courts, according to an interview he gave to National Public Radio.

“We’re actually anticipating the… regulation will be enjoined. And then we’ll have to go from there, as unfortunately, many times, this happens,” Mike Morgan told NPR last week.

The new rule requires asylum seekers to first pursue safe haven in a third country through which they had traveled on their way to the United States. But the legal challenges contend that Trump cannot force those migrants to apply for asylum elsewhere unless the United States has a “safe third country” agreement with that country.

Mexico, which would be most affected by the new rule, cut off discussions with the United States about reaching such an agreement, its foreign minister said on Monday.

The Trump administration had previously given Mexico until July 22 to significantly lower migration flows but the deadline passed without comment from Washington.

Guatemala, another country that could be forced to process asylum claims of migrants headed for the United States, previously rejected U.S. entreaties on a similar deal.

Our View: Local authorities should have more power on certain issues