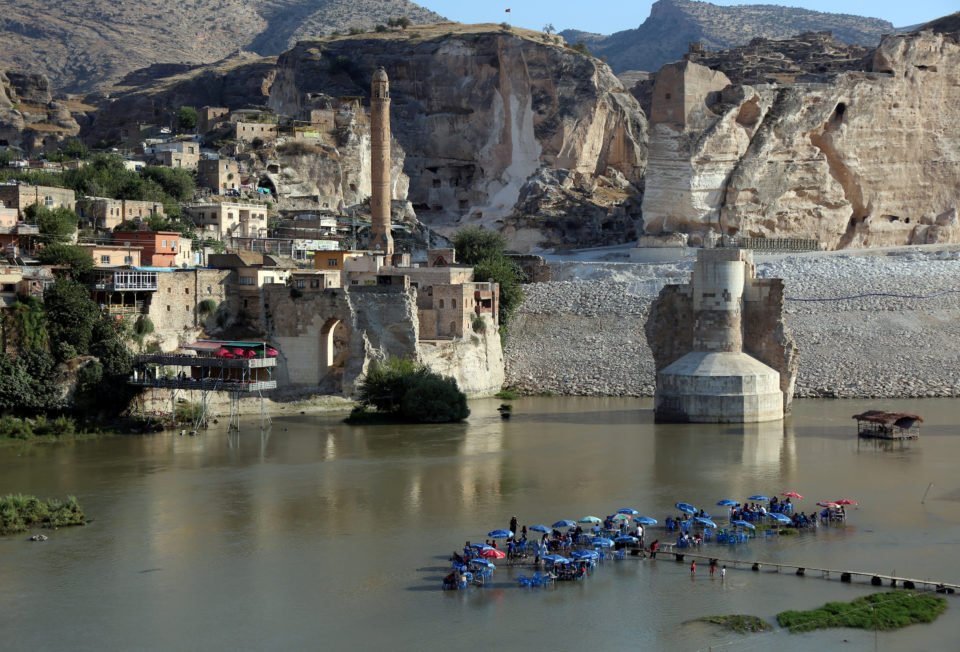 The Tigris river flows through the ancient town of Hasankeyf, which will be significantly submerged by the Ilisu dam being constructed, in south-eastern Turkey

Turkey has started filling a huge hydroelectric dam on the Tigris river, a lawmaker and activists said, despite protests that it will displace thousands of people and risks creating water shortages downstream in Iraq.

Citing satellite images, they said that water was starting to build up behind the Ilisu dam, a project that has been decades in the making and which aims to generate 1,200 megawatts of electricity for south-east Turkey.

Turkish officials have not commented on work at the dam. Turkey‘s State Hydraulic Works (DSI), which oversees dam projects, referred questions to the Presidency, and the Agriculture and Forestry Ministry was not available to comment.

However, President Tayyip Erdogan said earlier this year that Turkey would start filling the Ilisu dam in June, a year after it briefly held back water before backing down following complaints from Iraq about reduced water flows in mid-summer.

The dam, which first gained Turkish government approval in 1997, is a key part of Turkey‘s Southeastern Anatolia Project, designed to improve its poorest and least developed region.

Iraq says the dam will create water shortages by reducing flows in one of two rivers which the country depends on for much of its supplies. Around 70% of Iraq’s water supplies flow from neighbouring countries, especially via the Tigris and Euphrates rivers which run through Turkey.

Satellite images from the past two weeks show the dam has started holding water, said Necdet Ipekyuz, a lawmaker from Turkey‘s pro-Kurdish Peoples’ Democratic Party (HDP). He said a road in the area has already been submerged.

“They are taking steps slowly to decrease the reactions to water being held. That is why they are not informing the public,” he said, adding that several HDP lawmakers tried to visit the dam in July but were prevented by police.

Environmental campaigners have unsuccessfully challenged the dam project at the European Court of Human Rights on the grounds it would damage the country’s cultural heritage.

The rising waters of the dam are also expected to eventually submerge the 12,000-year-old town of Hasankeyf. Residents are being moved from the ancient town to a “New Hasankeyf” nearby, while historic artefacts have also been transported out of the area.

A group of NGOs, lawmakers and labour unions shared satellite images of the dam showing the increase in water levels between July 19-29.

“The current situation is strengthening the idea that the valves have been closed permanently,” the group, known as Hasankeyf Coordination, said in a statement.

“Because the dam lake is growing every day, the people who live in these areas are worried. They cannot know when the water will reach their residential or agricultural areas.”

The Iraqi government said in a statement that Turkish and Iraqi officials had discussed the water resources of the two rivers in Baghdad on Wednesday to see how they could “serve the interests of both countries”.

Turkey proposed setting up a joint research centre in Baghdad for water management and to work together on some agriculture plantations in Iraq, as well as projects for development of drinking water infrastructure.

The European Court of Human Rights in February dismissed the case brought by environmental campaigners to block the dam project, saying heritage protection is the responsibility of Turkish authorities and it had no jurisdiction.

The government needs to make an announcement, even if the dam were being filled for a trial run, said HDP’s Ipekyuz. “They are trying to tie a belt around the Tigris river’s neck and suffocate it,” he said.