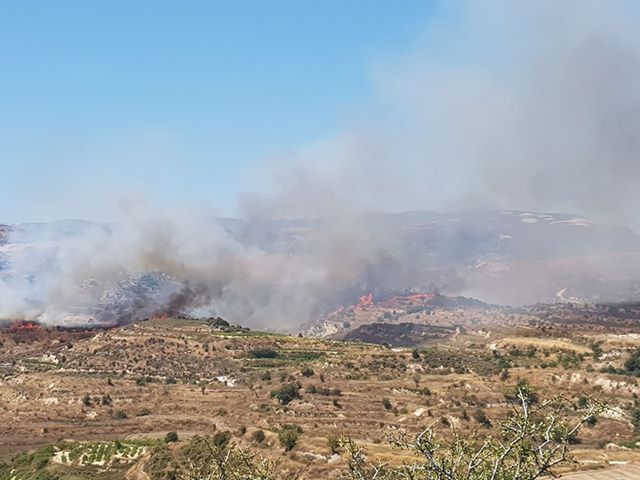 Police were on Monday night questioning several people over the fire that broke out at noon between Malia and Pachna villages and which was still raging out of control by late on Monday night.

Several people were called in for questioning by police, who are examining evidence suggesting that the fire may have been set deliberately, state broadcaster CyBC said. Reports said that a total of three people were being interrogated.

The rough terrain in the Limassol district area and strong winds allowed the fire to spread across an extensive area among the villages of Malia, Pachna and Vouni, developing on several fronts.

Neighbouring Kissousa, a small village of 10 residents, was also evacuated as a precaution by police and the civil defence.

“The fire was 50 metres away from the village,” said Kissousa mayor, Evanthis Marneros, the only village resident to remain in the area. Speaking on a television news programme later on Monday, when the flames threatening the village had been put out, Marneros thanked “the saint of the village” for dousing the flames.

The initial response to the flames which started at 11.40am consisted of seven fire trucks, 20 fire fighters and four aircraft, though reinforcements were being constantly called in to assist as the fire continued to rage out of control, burning trees and wild vegetation.

By early afternoon, 18 fire trucks, 41 fire fighters and six aircraft were battling the flames, as well as three fire trucks, 12 staff and one agricultural tractor from the forestry department.

At 5pm, the fire service announced that additional reinforcements had arrived. Efforts in the air were bolstered by two British bases helicopters while firefighters on the ground were further aided by five more fire trucks – three from the civil defence and two from the game service.

Persisting strong winds continued to spread the fire at nightfall, when aerial firefighting efforts had to fall back, leaving the difficult task of placing the fire under control up to those on the ground.

Fire service spokesperson Andreas Kettis said that ground-level efforts to place the fire under control would continue throughout the night.

Though the extent of the damage caused by the fire so far is not clear, residents of neighbouring villages have reported extensive damage to crops and agricultural land, while several non-inhabited buildings have also been burnt by the flames.

The Ayios Amvrosios-Vouni road was closed to traffic on Monday night after the fire damaged electricity and street light poles.

The fire service said on Monday that general patrols have been stepped up during both day and night and additional personnel is working in cooperation with police in areas at increased risk of fire.

An announcement has been issued calling on the public to be very careful and avoid any activity which may cause a fire.

The public is urged to call 112 or 1407 immediately when detecting a fire and also inform the service when spotting suspicious movements.