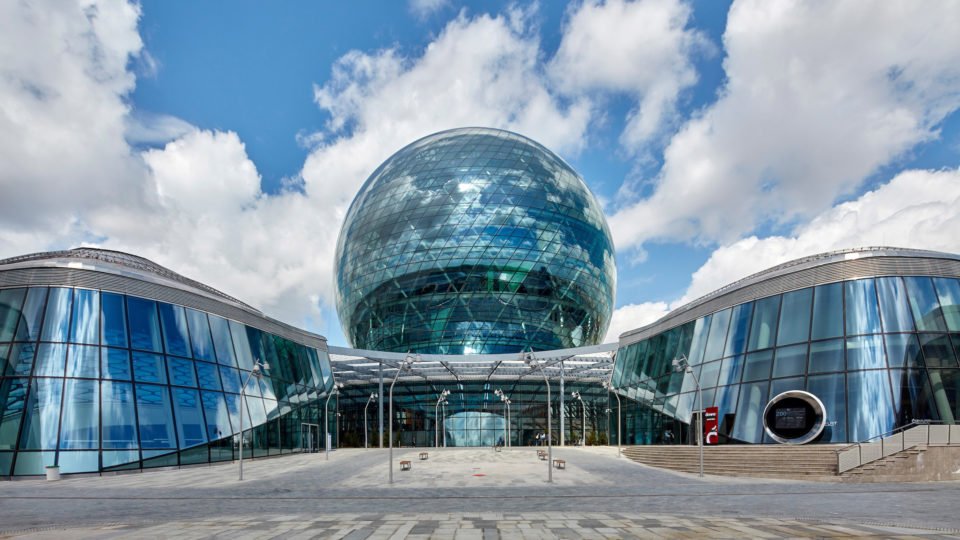 The financial district in Nur-Sultan

Was I dreaming? I blinked and looked again, still drowsy from our red-eye flight into Kazakhstan. No, those really were huge Soviet-era spaceships and rockets. They dominated the skyline as our airport shuttle bus approached Nur-Sultan, the country’s modern capital.

These futuristic-looking monuments were every bit as impressive as Berlin’s Brandenburg Gate or other landmarks in major European capitals. And, as feats of human ingenuity and ambition, they seemed a fitting greeting to those flying into Kazakhstan to attend a major financial conference last month.

Held in the flashy financial district of Nur-Sultan, as Astana is now called, the second round of Astana Finance Days embraced a wide range of topics, from the central Asian country’s role in the Belt and Road initiative to the creation of the Astana International Financial Centre (AIFC).

Officially launched last year, the AIFC is a financial hub in Nur-Sultan. One of its main goals is to implement the framework and policies that will guide Kazakhstan in joining the top 30 developed countries by 2050. The country, largely located in Asia but with its most western parts in Europe, is already central Asia’s economic powerhouse, generating 60 per cent of the region’s GDP, primarily through its oil and gas industry. Kazakhstan also has huge mineral resources and is a leading exporter of uranium.

According to the US State Department, Kazakhstan has the best investment climate in the region. It was also the first of the former Soviet republics to repay all of its debts to the IMF – seven years ahead of schedule.

A key attraction for foreign investors is that Kazakhstan, which enjoys political and economic stability, has an independent arbitration court that operates under the principles of English common law. This ensures that investors can rely on proven grounds for success. The presence of experienced UK judges adds the golden rule of trade – trust.

Such measures offer investors a familiar setting which lifts the veil off the former Soviet republic. English law is renowned for its flexibility and transparency in resolving disputes. It offers a safety net to investors who may not be familiar with other areas of the nation’s economy.

The former prime minister of Kazakhstan, Karim Massimov, has said in the past that: “The Astana International Financial Centre is a new project, similar to what has been done in London many centuries ago, and Dubai and Singapore a few decades ago. We are going to create a finance centre based on English common law, on the English language, and an independent court.” 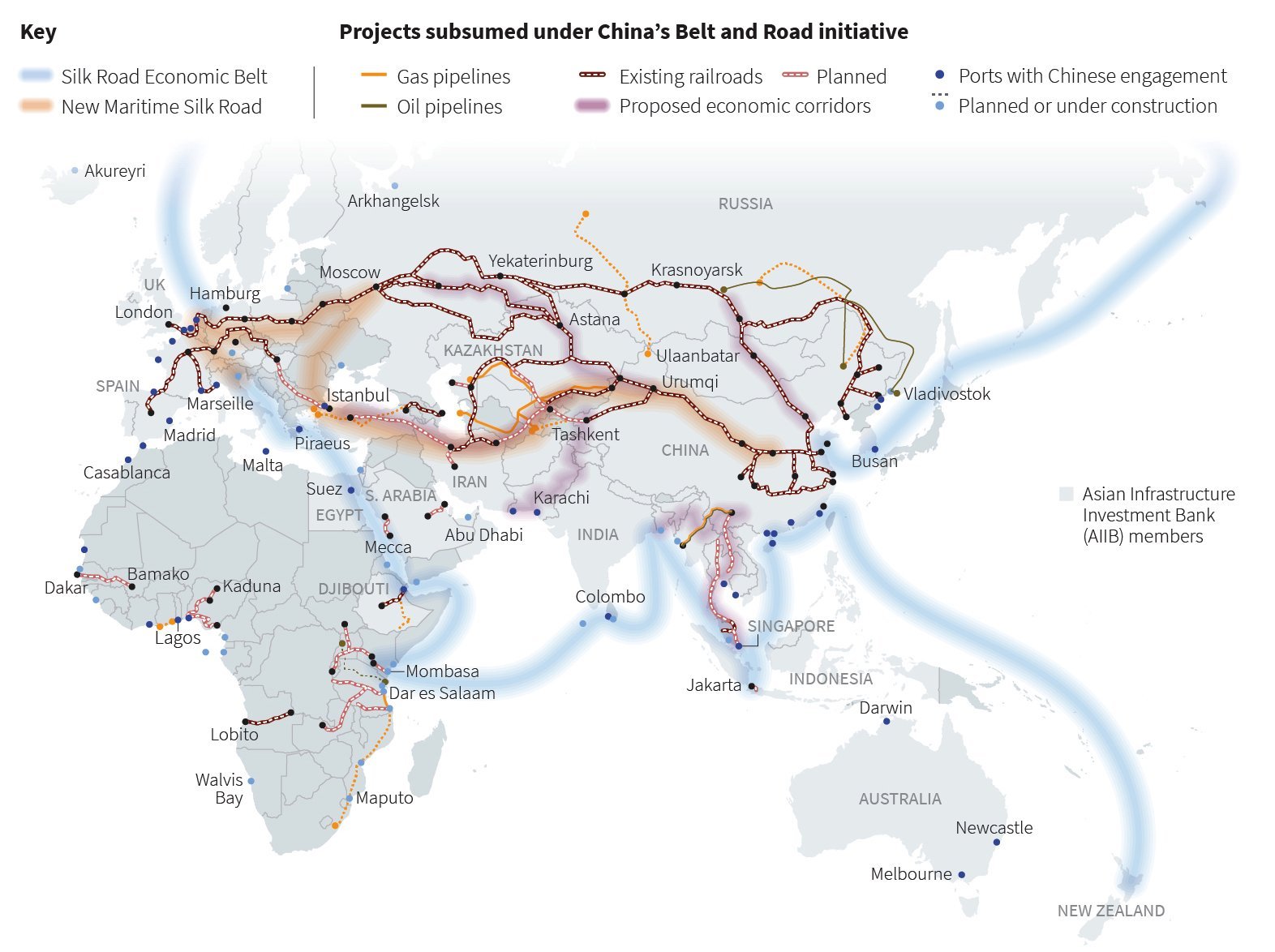 The OECD’s 2017 Investment Policy Review noted that “great strides” have been made to open up opportunities to foreign investors and improving policies to attract foreign direct investment. Facilitating investment, several major foreign banks have branches in Nur-Sultan, including HSBC, RBS and Citibank.

Also present are the European Bank for Reconstruction and Development (EBRD), which to date has invested over $9 billion in Kazakhstan, and the Eurasian Development Bank. The EBRD’s activities in Kazakhstan include 262 projects ranging from transportation and logistics to oil and gas development, water treatment, and health. On the energy front, US companies have been investing and operating in Kazakhstan for decades.

The inspiration Nur-Sultan draws from Dubai, Hong Kong and Singapore is quite clear, be it from the indoor beaches in the malls or the towering buildings around the city. It differentiates itself however by seeking to be the “port of the land”. While landlocked, it lies directly on the route from Asia to Europe.

The route now sees freight from China reaching Europe in just 15 days, with an 18-day journey to London. While more costly than shipping by sea, it outpaces the 30-45 days the cargo would take over the waves.

Almost everyone has now heard of and gained an interest in China’s Belt and Road initiative (BRI). The project involves a staggering 152 countries. From Italy’s key ports to China’s tech capital, Shenzhen, it is a vision of the future. Kazakhstan is uniquely positioned to fully capitalise on being a part of the highway of the new age.

As the ninth largest country in the world, Kazakhstan links Europe, Russia and Asia together. While the BRI is revolutionary in its approach to the modern world and its vision, it is also a reimagining of the ancient Silk Road. As the cornerstone in the old world’s trade route, Kazakhstan is building the framework to reclaim its role in the world economy.

The central Asian nation’s vast resources of oil and other natural goods have given it the wealth necessary to invest in such projects. The oil revenue is ensuring diversification into technology, infrastructure, financial services and further afield.

Visiting the country, it is clear where much of the revenue from natural resources are being poured into. After Astana/Nur-Sultan replaced Almaty as the Kazakh capital in 1997, it saw a construction boom which to this day is witnessing rapid growth. From the smooth wide roads to the gleaming, towering office blocks and apartments this city, with a population of just over one million, is a hub of activity.

As the conference came to an end, it was time to wander through the shining city. Walking through the streets I thought that most of the buildings would not have been out of place in London or Paris. Google maps offered an enormous amount of choice locations. There was once place in particular however which had caught my attention.

Each morning while being driven from the hotel to the financial district, there was one building in particular which stood out. The Khan Shatyr mall.

At night while driving through the city, it lights up as either a light blue or a calming, softly glowing orange. Designed to look like a tent, it draws inspiration from the Kazakh peoples’ nomadic ancestors. It can often be a challenging task to channel a nation’s history into a modern, planned cityscape. But they have done it well, and proven that the nomad’s descendants have set down strong roots.

Inside, the mall was in a familiar setting – teenagers on their smartphones, families milling around and all the worldwide brands one would expect.  The sense of calm, orderliness and cleanliness which existed throughout the city was even more noticeable within the mall.

Trusty Google Maps offered a variety of restaurants. I took the chance to make the most of the time and set off to try out some local cuisine within the Khan Shatyr. A hearty and filling meal of almost fruity pilaf rice with sheep and horse meat did the trick. Washed down with a bowl of something one can only describe as a warm and soup-like ayran, but more cheesy – it was time for bed.

As we drove to the airport for our flight home, we once more marvelled at the Soviet-era spaceships and rockets which towered above us. By now, I had found out that the Baikonur Cosmodrome, in southern Kazakhstan, is the world’s first and largest space launch facility. Perhaps most famously, it launched Yuri Gagarin into space to become the first human spaceflight. Quite an impressive thing to think about on your way to the airport.

A classy ride home on Air Astana, and all I could think of was that Kazakhstan, the so-called “Buckle” in China’s BRI project, has all the makings of a powerhouse economy.