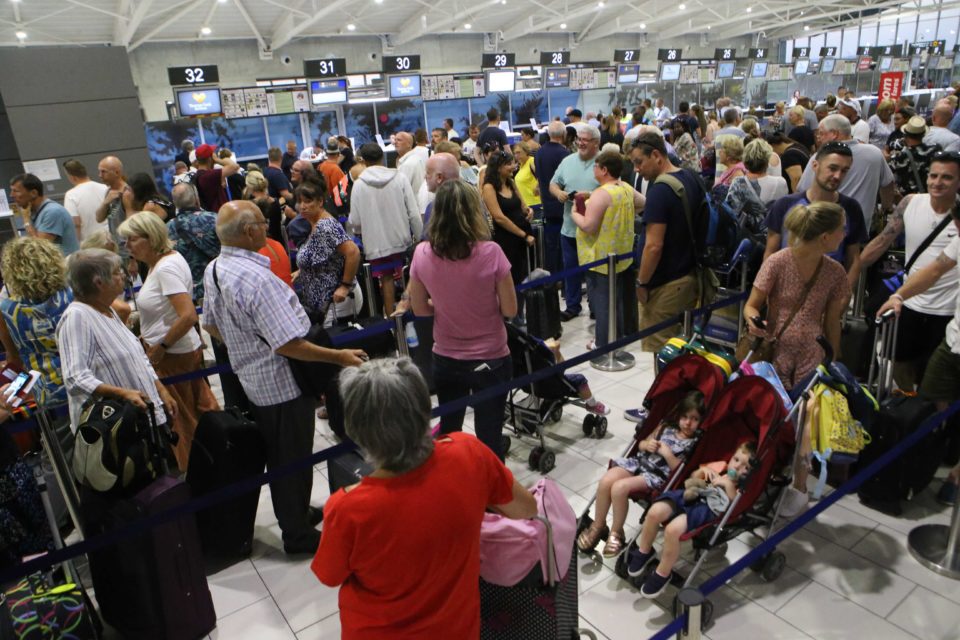 Paphos hoteliers have been the hardest hit by the collapse earlier this week of Thomas Cook with some reliant on the tour operator for up to eighty per cent of their bookings.

“We have lost a lot of money, I can’t say how much, and slowly Thomas Cook guests are leaving. By October 3, all of our affected guests will have returned to the UK,” Nicolas Protopapas of Leonardo Cypria Bay, a Sentido hotel, reliant for 75 per cent of its occupancy on Thomas Cook, told the Sunday Mail.

Thomas Cook was bringing in around 250,000 holidaymakers a year to Cyprus, the majority of them British and Paphos’ main market. Tourism officials are remaining tight lipped about which Paphos hotels are facing the greatest losses but confirmed to the Sunday Mail that one hotel alone is facing a loss of 1.8 million euros and a second 1.5 million. Around six or seven hotels are the worst hit.

The ‘most horrifying’ situation is now being faced by the affected hoteliers across the island, Euripides Loizides, the secretary of the Paphos hoteliers association, told the Sunday Mail.

“The reality is that if bank instalments are not met, after 90 days banks can move in,” he said.

“The new legislation in place means that this could be a reality. Hotels have to ensure that they continue to operate, pay staff and suppliers, pay debts and address the damage. It’s no joke, banks don’t take kindly to empty hotels. The damage is the days after September 23, what to do with the rooms,” he said.

As tour companies usually book rooms a year ahead, there are concerns for future holiday packages. Accommodation that has already been booked with the bankrupt tour operator for next year is now up in the air and hotels face the challenge of trying to claw back bookings for the next summer season.

A large number of other Paphos hotels and hotel groups also had deals in place with Thomas Cook which accounted for a sizeable chunk of their overall bookings.

Of the 293 rooms at the Sentido Leonardo Cypria Bay hotel, 200 of them were for Thomas Cook bookings, said Protopapas.

“The Sentido brand has various concepts and this collapse is a big damage and loss,” he said.

The beachfront hotel is in a stunning location and is billed as a resort for singles, families and couples, 2 km from Paphos town centre.

“We also had airline Germania collapse at the start of the year, Neckermann Poland, a subsidiary of Thomas Cook, has ceased operations too.”

In a statement, Neckermann said that despite Polish operations being healthy, the branch could not operate independently without its parent company.

“Our hotel will stay open, and we are trying to get other tour operators to work with us. Some have doubled the price of flights as the demand is huge and there are not enough seats, it’s a case of supply and demand.”

As well as being a tour operator, Thomas Cook had its own airline and its closure has impacted on Paphos air connectivity and has also led to a sharp increase in prices of flights.

Protopapas stressed that more connecting flights are desperately needed, and this has always been a problem for Paphos anyway. He added that the gap left by Thomas Cook flights couldn’t be filled straight away as it was unrealistic to expect new flights, ‘tomorrow’.

“It takes time and licences need to be obtained,” he said.

Droves of mostly British Thomas Cook customers have been contacting Sentido hotels in Cyprus to ask if their reservations are valid, said Protopapas, noting that they are not. However, the hotel is offering these affected customers a ‘good price’ to rebook via their website. However, the problem remains as how to get them to Cyprus, he said.

“If we have flights, which we don’t have enough of, we can increase occupancy. This situation is a big loss for Cyprus and especially hotels in Paphos and to a lesser degree, Ayia Napa.”

“This means that out of the 250,000 of Thomas Cook’s visitors to Cyprus [every year], about 50 per cent will be able to keep coming,” the deputy minister for tourism Savvas Perdios said this week.

But this does not help Paphos which is particularly reliant on British tourists.

A second Paphos hotel, Sunconnect Sofianna, a four-star 172-roomed resort is also weighing up the damage caused by the Thomas Cook collapse. The operator’s bookings accounted for 80 per cent of the hotel’s occupancy rate. The remaining 20 per cent are from direct bookings.

The hotel has recently undergone a massive upgrade costing millions to create a stylish, spa and resort that is family friendly. The concept is a family hotel brand of Thomas Cook on an all-inclusive basis.

A spokesman for the hotel, who wished to remain unnamed, said that losses incurred would be huge but declined to comment on the amount.

“Like others, we have lost a lot of money and I am very busy trying to prepare and negotiate for next season as it is almost too late, and we can’t afford to miss out. The concept here is very successful, which is why it was constantly fully booked. Other companies such as TUI and Jet2 have similar concepts so we are in negotiations to see how we will proceed,” he said.

The spokesman added that hoteliers were aware from last year that Thomas Cook were facing ‘some troubles’, as it is a public company. He added that the hotel had a close relationship with the company, who assured them that they were finding another investor.

“This was confirmed officially and they came here and we signed with them for 2020. They were expecting to make the new arrangement. But last week, the banks demanded 200 million extra. I think it was on purpose, the UK government refused to help, and so here we are,” he said.

Ninety per cent of customers at the hotel are British, the rest are made up of Germans, Belgians and a few Dutch, he said.

Staff at Smartline Paphos noted that it was ‘business as usual,’ and an announcement on their website notes: “The collapse of the Thomas Cook Group will not affect the running of this hotel. This hotel is a privately owned business and will continue business as normal.”

“People are contacting us to see if their reservations are still valid, we have managed to claw back about one third of our bookings already. People still want to come on their holidays to Paphos,” a staff member said.

But he added that the situation is bleak for many hotels, as millions have been lost.

“It’s not just the tour operator going bust that’s an issue, it’s also the debt of renovations for a number of hotels,” he said

The Brexit referendum was flawed