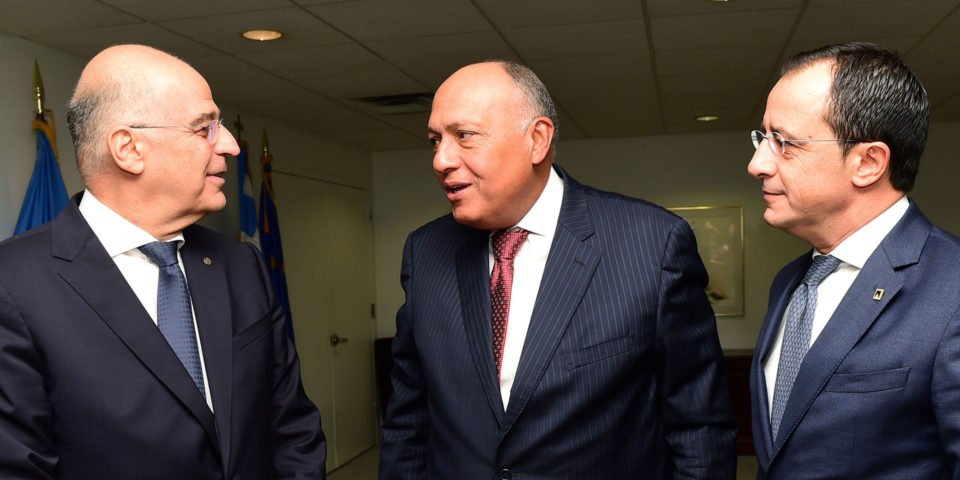 The three ministers in New York

The Turkish foreign ministry branded statements made after a joint meeting of the foreign ministers of Cyprus, Greece and Egypt in New York as “fictional allegations”.

In a statement, spokesman of the Turkish foreign ministry Hami Aksoy said “we completely reject the fictional allegations against our country in the joint declaration which was given at the end of the joint meeting between the foreign ministers of Greece, Egypt and the Greek Cypriot administration of southern Cyprus on September 27 in New York”.

The recent efforts of Greece and Cyprus “to involve countries of the EU and the region for their own maximalist national purposes, contrary to international law, do not serve peace and stability in the eastern Mediterranean,” he continued.

The countries of the region do not have responsibilities for or the right to comment on problems in the Aegean and in Cyprus, the spokesman said. “Movements aimed at neglecting and isolating Turkey and Turkish Cypriots have no chance of success”.

“Also, while Greece on the one hand sends messages of co-operation, on the other it demonstrates its dishonesty with the unsubstantiated allegations against our country,” Aksoy said.

The Turkish foreign ministry called on Greece, Cyprus and Egypt to “confront the political, economic and geographic realities of the region and to follow policies that relate to these realities”.

The three ministers’ statement said they were determined to continue their co-operation to promote peace and stability in the region. They also slammed Turkey for its illegal activities in Cyprus’ EEZ.

Britain’s Prince Harry to touch down in Malawi

Idlib has become a terrorist haven