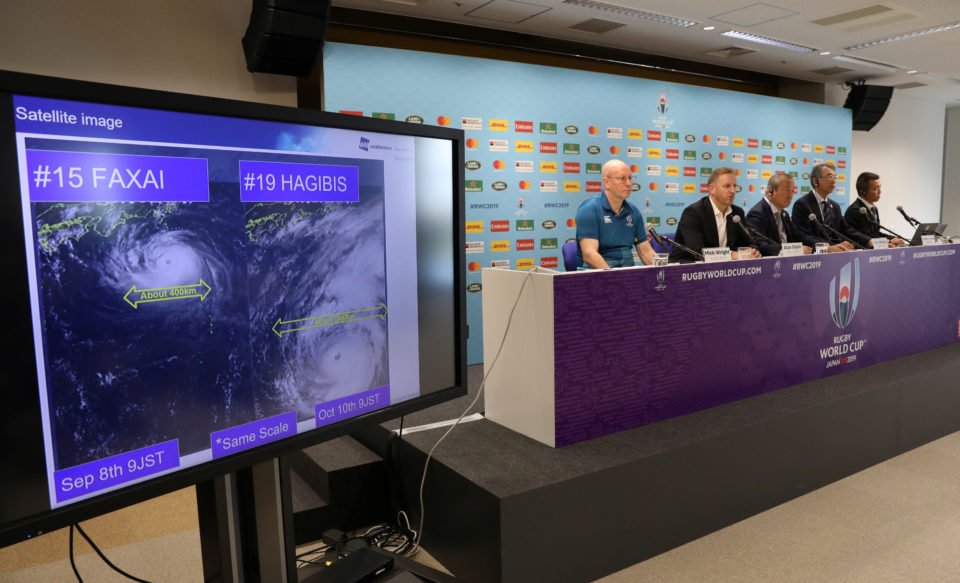 A super typhoon bore down on Japan on Thursday forcing the cancellation of two rugby World Cup matches and some transport, and threatening to disrupt Japan‘s Formula One Grand Prix race this weekend.

Parts of Japan are still recovering from a devastating typhoon that struck a month ago, as the new storm, Typhoon Hagibis, headed north over the Pacific towards Japan‘s main island.

It could make landfall on Saturday, the Japan Meteorological Agency said.

“Regardless of whether this typhoon makes landfall or not, it will have a grave impact,” an agency official told Reuters.

Rugby World Cup organisers have cancelled Saturday’s game between England and France as well as New Zealand’s match against Italy due to the risk from the typhoon, while a Sunday game between hosts Japan and Scotland is in doubt.

The sport’s governing body, World Rugby, and tournament officials said the decision had been taken due to the expected disruption, particularly to transport.

The Japanese airline ANA will cancel all domestic flights to and from Tokyo’s Haneda airport and Narita airport in Chiba prefecture, east of Tokyo, on Saturday, it said on its website.

East Japan Railway Co, which serves eastern Japan including Tokyo, said it might have to suspend operations on conventional lines as well as the Shinkansen bullet train service over the weekend.

Operations of the Shinkansen linking Tokyo and the western city of Osaka could also be cancelled over the weekend, Central Japan Railway Co said.

Organisers of the Japanese Formula One Grand Prix said they were keeping a close eye on the typhoon and were working to minimise any disruption to this weekend’s schedule.

The Suzuka circuit, which is set to host Sunday’s race, is about 300 km southwest of Tokyo.

Typhoon Hagibis is expected to pass over or close to Chiba prefecture, which was hit hard by typhoon Faxai a month ago.

Faxai, one of the strongest typhoons to hit Japan in recent years, destroyed or damaged 30,000 houses and caused long power cuts.

An official at the prefectural government’s disaster response headquarters urged people to get ready.

“In particular, we want them to store up at least three days’ worth of food and water,” said the official, Naoto Hayashi.

In Tokyo, which is also in the likely path of the storm, 1.5 million people live below sea level in eastern parts of the city.

Experts have warned that as many as 5 million people would have to be evacuated if massive dikes and levees in low-lying areas were to be overwhelmed by surging floodwaters.

Japan‘s navy, or Maritime Self Defense Force as it is known, has cancelled two preview days of a fleet review and may have to abandon the main event on Monday too.

The review, last held four years ago, is due to include 46 naval vessels, including a helicopter carrier, destroyers and submarines, and 40 aircraft.

Plant of the week: Plant used by herbalists for IBS and aromatherapists for stress