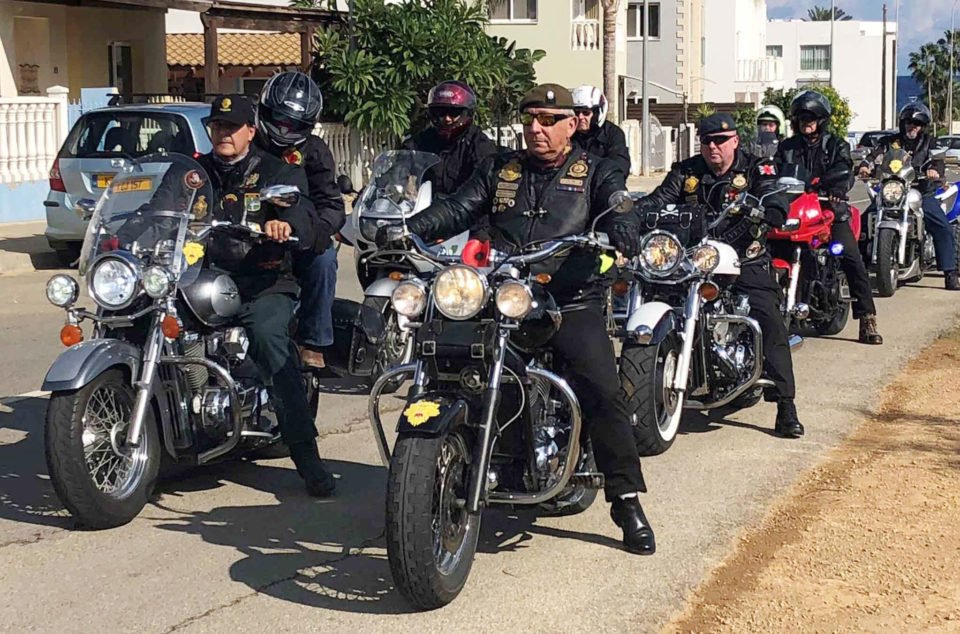 The unique squadron of motorcycle riders (RBLRB-Cyprus SQN) was founded by three members, one of them, Paphos based Matt Hingley, a military veteran is the ‘area sub rep’ which means that he heads up the recently recognised official overseas group.

“We are a growing group of bikers that support the work of the Royal British Legion (RBL), a charity set up in the UK to support armed forces veterans and serving personnel in their time of need,” he told the Sunday Mail.

As a military veteran, he served in the RAF, Hingley noted that the main aim of the group is to raise both awareness and funds for the RBL Poppy Appeal. This is a charity that provides financial, social, political and emotional support to those who have served or who are currently serving in the British armed forces, and their dependents.

“I am extremely proud of the challenging task we have accomplished to establish ourselves here on the island and to gain formal and recognition and official approval from the RBL headquarters in the UK as their representatives for the Riders Branch in this region,” Hingley said.

An ex RAF officer for 12 years, and then a maritime security specialist in the Middle East, Hingley has been passionate about motorbikes for most of his life and currently rides a Yamaha 1300 Cruiser.

“I met a small group of other motorcycle enthusiasts after I moved to Cyprus a few years ago and some were ex military, so we started discussing setting up a riders branch here in Cyprus and thought it was a fantastic idea.”

The RBL help members of the Royal Navy, British Army, Royal Air Force, veterans and their families all year round. They also campaign to improve their lives, organise the Poppy Appeal and remember the fallen.

The Cyprus riders branch is the newest group to be formed globally and is a branch of the Royal British Legion. It has a diverse membership, both young, male and female. They take part in all sorts of motorcycle and biking events, on all sorts and sizes of motorcycles and trikes as well.

They also participate in formal British Legion organised events and fund raising.  Occasionally, the Cyprus squadron (RBLRB) is also involved in supporting other recognised Cyprus-based charities where applicable and when able, he said.

“We have many members and supporters on our Facebook page, and we have 14 members that are riding and some are serving personnel at Akrotiri and Dhekelia, we are unique in this way and proud to have front line personnel that are members,” he said.

Of the 14 motorcycle riders, four are women, he added. There are two female reps that are in charge of the female side of the squadron, he said.

All members are encouraged to play an active role within the branch and to be pro-active in getting together with other branch members.

Hingley explained that the ‘Riders Branch’ was set up in 1984, by a group of RBL members, who were passionate about motorcycling and a vision of how to utilise this to support the cause.

Since then, the riders branch has grown to more than 6,000 members worldwide, with riders groups in Spain, Gibraltar, Australia, South Africa, and now in Cyprus.

“We have members from all branches of HM Armed Forces and all the public services, as well as those who have not served, but wish to support the aims of the RBL through their membership of the riders branch,” he said.

The squadron will attend a memorial service at Akrotiri base on Friday, November 8 for the first time and for the second year in a row, will parade at the military service to be held to honour Remembrance Day, hosted by the Camp Commandant for a second year.

The riders wear distinctive leather vests, with specific colours, unit badges and patches, he said. When attending formal events, they wear regimental berets where applicable and dark clothing. They also attend funerals of veterans or the fallen, to escort a hearse where requested, he added.

“Ultimately we are bikers and try to raise money and also enjoy ourselves at social events that we attend. We also regularly enjoy group ride-outs and meeting other biking enthusiasts,” Hingley said.

The Cyprus squadron also aims to attract more members living, working or serving on the island. The riders collectively attend as many events as possible in Cyprus throughout the year.

To find out more:

Johnson says my deal is only way to get Brexit done