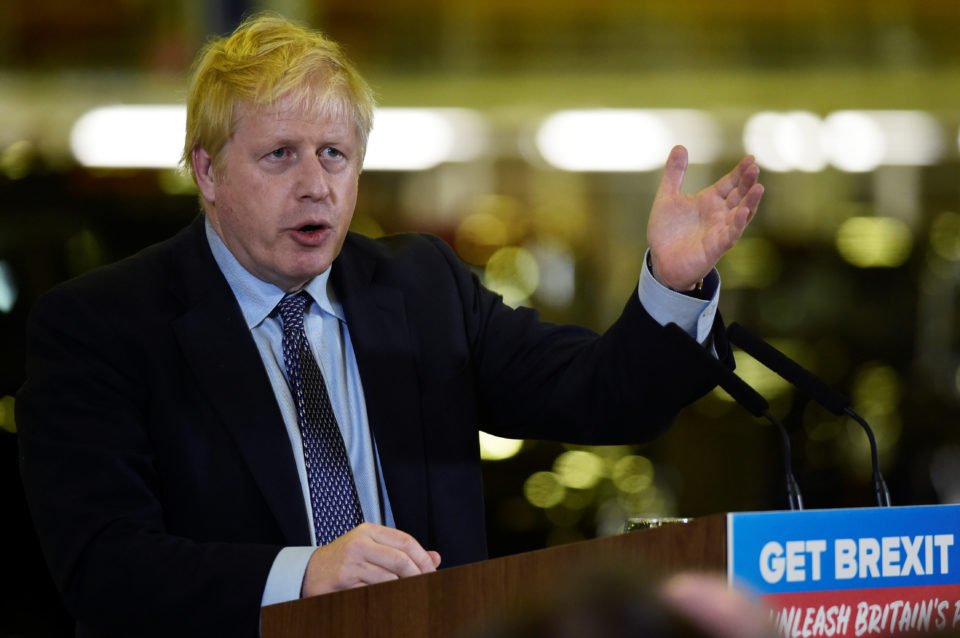 Boris Johnson has insisted voting Conservative is the ‘only way’ to get Brexit done after Nigel Farage refused to bow down to pressure to pull his party’s candidates from marginal seats.

The Prime Minister said a vote for “any other party” would be a vote for a coalition between Labour’s Jeremy Corbyn and the SNP’s Nicola Sturgeon, urging voters to instead grant him a majority at the December 12 poll.

Mr Johnson said the Tories were committed to a One Nation programme, despite ex-Conservative cabinet minister David Gauke – a key advocate of such a philosophy – suggesting those opposed to a no-deal “lend” their votes to the Liberal Democrats.

In his first major speech of the election campaign, Mr Johnson told workers at an electric vehicle factory in the West Midlands that Brexit had been “paralysing politics” for three and a half years.

“I’m afraid to say that the only way to get Brexit done at this election is to vote for the Conservatives and to hope that we can get a working majority,” he said.

“Because a vote, alas, for any other party would simply lead to a premiership of Jeremy Corbyn in coalition with Nicola Sturgeon and, as I said earlier, on two referendums next year, when I think the people of this country really want to make so much more progress on other things.”

Earlier on Wednesday, Mr Farage confirmed he would field candidates in every Labour-held seat – in a move that could hamper Tory efforts to win a majority.

Mr Johnson said: “I just want to say about Nigel Farage and the Brexit Party – it is always a very difficult thing for any party leader to withdraw candidates from an election and I understand that.

“But all I can say … for the avoidance of doubt, to repeat my central message, there is only one way to ensure that we get Brexit done – get this thing finished, get us out, do a fantastic free-trade deal – and that is to vote for us and the Conservatives.

“You vote for any other party and risk a coalition of chaos and two chaotic referendums next year.”

The Brexit Party leader, speaking at a boxing club in Ilford, Essex, said: “In parts of east London like this, there are constituencies that voted by 69%, by 70%, to leave the European Union.

“All their senior figures said during the referendum, after the referendum, and indeed in their election manifesto, they said they would honour the result of the referendum and they have – I put it to you – completely betrayed the trust of Labour voters in this country.

“We’re going to stand against every single one of them.”

Elsewhere on the campaign trail, Jeremy Corbyn rowed back on his total refusal to hold a Scottish independence referendum in his first term.

The Labour leader had told reporters there would be “no referendum in the first term for a Labour Government” even if the SNP won a majority of Scottish seats in the upcoming General Election.

But hours later, Mr Corbyn – who began a two-day tour of Scotland in Glasgow on Wednesday – said he did “not countenance” another independence referendum in “the early years” of a Labour Government during a combative exchange with reporters.