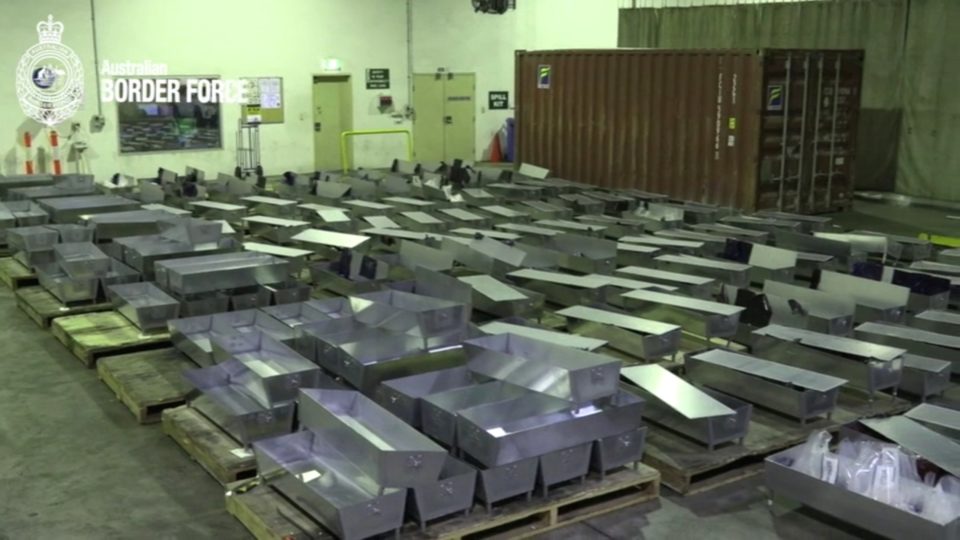 Some of the 200 aluminium barbeques used to smuggle hundreds of kilos of MDMA, in Sydney

Australian police have arrested two men for allegedly smuggling 645 kilogrammes of ecstasy hidden inside hundreds of aluminium barbecues that had been shipped from Cyprus to Sydney, the culmination of a six-month investigation spanning three countries.

Cyprus police said they did not rule out arrests on the island.

In statements to the media Tuesday, the head of the drugs squad Ykan Glafkerios Leontiou said several people from Australia, the UK and Cyprus appeared to be involved in the case. He said investigations were also focusing on who exported the container from Limassol to Sydney.
“There is enough evidence to establish the criminal case against persons in Cyprus,” he said.
“The result of the co-operation and coordinated actions by the three countries has proved to be a major blow to drug traffickers and organised crime,” he added.

In a statement earlier on Tuesday, the Australian Border Force (ABF) said it had charged a 30-year-old man from Queensland and a 33-year-old Canadian national over their involvement in the criminal enterprise. At well over half a tonne, the haul of MDMA, commonly known as ecstasy, is the biggest shipment by weight seized in Australia this year.

The investigation remains ongoing and is expected to lead to further arrests, the ABF said. Police didn’t disclose the names of the two men held, who each face a maximum penalty of life imprisonment if convicted.

The case began in July when police in the Cyprus Drug Law Enforcement Unit (DLEU) tipped off ABF counterparts about a potential large shipment of MDMA, commonly known as ecstasy, in a container shipping from Limassol and bound for Sydney. The investigation also involved the United Kingdom National Crime Agency, the ABF said.

On searching the container, the police found 200 aluminium barbecues, many with false base plates concealing multiple packages of the drug.

Officers swapped the MDMA for an inert substance and delivered the barbecues to a warehouse in Sydney, where it sat for more than three months.

Starting in late October, the barbecues were gradually shipped to another warehouse, also in Sydney, where the Australian suspect began to prepare the drugs for distribution, the ABF said.

The Canadian suspect arrived in Sydney last week to visit the warehouse and was arrested in Brisbane on Monday.

“It will be alleged in court that he acted as a liaison for the criminal group responsible for importing the MDMA,” the ABF said.

The Head of the EU and International Cooperation Office of the DLEU praised the ongoing cooperation that had been essential to the success of the operation.

“As part of the efforts of the Cyprus Police, and specifically the DLEU’s efforts to combat the illegal trade of drugs at an international level and enhance cooperation with other authorities across the world, all the necessary and available information was forward to Australian law enforcement for their consideration and further handling.

“During the months this investigation has been running, the Cyprus DLEU, through its European Union and International Police Cooperation Office, was in a close contact and collaboration with Australian authorities, specifically the AFP Liaison Officer accredited to Cyprus, who is posted in Lebanon.”

The arrests come as the ABF invests heavily in new technologies allowing officers to see further into shipping containers than ever before, ABF Regional Commander for New South Wales, Danielle Yannopoulos, said in the statement.

“Just this year we’ve found illicit substances in professionally manufactured car parts, fridges, furniture, and even an excavator,” she said.

“Our officers continue to prove, time and time again, that criminals who attempt to hide these substances are wasting their time. We have invested heavily in our technological capability in recent years, and our officers can see further into these containers than ever before.”

“The size of this seizure and the amount of harm it could potentially have caused cannot be understated, and the Australian community is safer for it not being on our streets,” she said.

“We are grateful to our partners in Cyprus and the UK for their willingness to help us as we seek to identify those responsible for this consignment, we will always try and work our way up the chain of organised crime syndicates seeking to profit from exploiting our community.

(A Reuters report was used for part of this article)

A day of Short Film