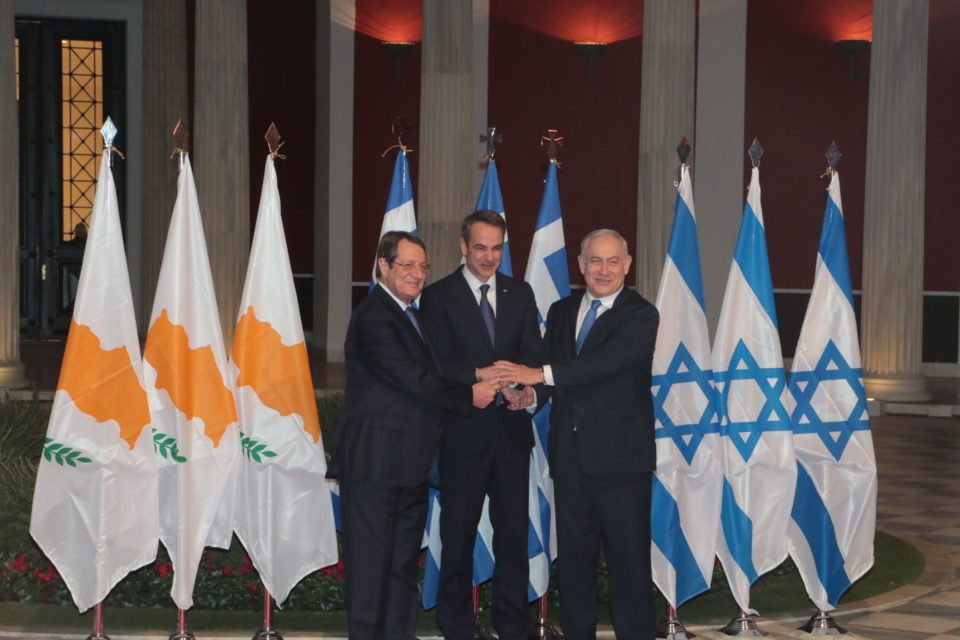 With Europe no longer needing gas supply diversification and its sharpened green focus, is the pipeline more of a pipedream?

After a year of on and off announcements, Greece, Cyprus and Israel signed the inter-governmental agreement for the EastMed gas pipeline on January 2 in Athens. Predictably this has been welcomed in the three countries with euphoric statements and many and varied claims and expectations. But what is this agreement actually about, and what is the future of this pipeline?

Pushing this through now is primarily a political response by Greece, Cyprus and Israel to Turkey’s challenges, posed through its agreement with Libya – which is incompatible with the internationally recognised law of the seas, Unclos.

The EastMed pipeline agreement constitutes a milestone in terms of East Med politics, and it certainly strengthens relations between the three countries at a critical time for the Eastern Mediterranean, promoting closer cooperation. It also has the support of the EU and the US.

Italy, where the pipeline will end up, did not participate due to active resistance from communities near potential pipeline landing sites and increased resistance from environmental activists – as was the case with the TAP pipeline. But Italy has confirmed its support for the project.

The agreement sets the legal framework for the possible construction and operation of the EastMed gas pipeline, if implemented, but by itself it will not lead to its construction. This requires securing buyers of its gas in Europe and companies to invest in the pipeline.

The signature of a letter of intent between Greece’s public gas supply company DEPA and Energean, earlier on 2 January, to supply 2 billion cubic meters/yr (bcm/yr) of gas to the pipeline from Energean’s gas-fields in Israel, is a good start in terms of securing the required gas supplies. It is very likely that others, such as Noble Energy operator of the Leviathan gas-field and possibly ExxonMobil operator of the Glafkos gas-field in Cyprus, may follow suit at some stage. Such deals could secure enough gas for the first stage of the project, which requires 10bcm/yr.

If built, by 2025 the pipeline would take gas from Israel and Cyprus to Crete and from there to the Peloponnese and then to western Greece. An additional leg would take the gas to Italy.

According to the study performed by Greece’s DEPA and Italy’s Edison, with part European Commission (EC) funding, the cost of the 1900km pipeline to Greece could be between $6-$7billion at a unit cost of $3.50/mmbtu (per about one thousand cubic feet). Including the cost of taking the pipeline to Italy, experts consider this to be optimistic, with the total cost likely to be $8-$10billion and higher unit costs. The pipeline is technically challenging but constructible.

It has been said that the EastMed gas pipeline will contribute to increasing energy security by diversifying gas supply sources to Europe, while strengthening the geostrategic role of Cyprus as an energy bridge to Europe. These were certainly the ideas behind the project when it was first proposed about eight years ago, and was later included by the EC as a project of common interest. But how valid are these today?

The idea that the EU is seeking energy security and supply diversification has been debunked by developments over the last few years. Europe has well-diversified supplies, receiving most of its gas through pipelines from Russia, Norway, Algeria and Libya and as LNG from Qatar, Nigeria, the US and others.

In May 2018 the EC and Gazprom reached an agreement under which Gazprom agreed to integrate supply of its gas within EU markets and to EU rules. This and success with Energy Union, establishing extensive bi-directional interconnectivity within the EU, have ensured that energy security is no longer considered to be a problem within the EU.

Since then, two new gas pipelines are about to be completed, Nord Stream 2 from Russia to Germany and TurkStream 2 from Russia through Turkey to SE Europe. In addition, Gazprom and Ukraine have just signed a new 5-year agreement enabling Russian gas to continue flowing to Europe. Through these Gazprom could increase its overall gas supplies to Europe, in comparison to 2019, at low prices that gas from the East Med cannot compete with. Russian gas can be profitable even when prices drop down to $4/mmbtu.

But the key factor that will decide the future of the EastMed gas pipeline is the gas price. European gas trading is carried out by independent companies buying and selling gas for profit. If the EastMed is to break into this market, EU support is not sufficient, price will be key. And there lies the challenge.

With gas at the Leviathan platform likely to cost $4.50/mmbtu and the unit cost of the pipeline likely to exceed $3.50/mmbtu, the price of gas at destination in Europe would need to exceed $8/mmbtu to make the EastMed commercially viable.

But the increasing penetration of cheap renewable energy is leading to a glut of energy and gas supplies in Europe and low prices. In December the price was less than $4/mmbtu and even though it is expected to increase, the World Bank forecasts that the average over the next decade will be less than $6/mmbtu.

In addition, the new EC will be publishing its Green Deal by March, setting the framework for the future of energy, including gas, in Europe over the next 30 years. And this future is decidedly green. Europe will become the first climate-neutral continent, enshrining a climate-neutrality goal by 2050 into law and setting-up a new carbon reduction target for 2030 by at least 50%.

As a result of this, the EC expects the use of unabated gas in Europe to fall by 20 per cent by 2030, and by more than 75 per cent by 2050, with gas prices remaining low in the longer term. This will make it very difficult to export expensive gas from the East Med to Europe.

Signing of the EastMed gas pipeline inter-governmental agreement is undoubtedly a major political success story. But market and price developments make it difficult for the EastMed to compete and secure gas sales to Europe. It may yet prove to be more of a pipedream than a pipeline.

Ministerial meeting in Egypt to evaluate developments in Eastern Mediterranean

Silky scarf: a music night for lute and guitar