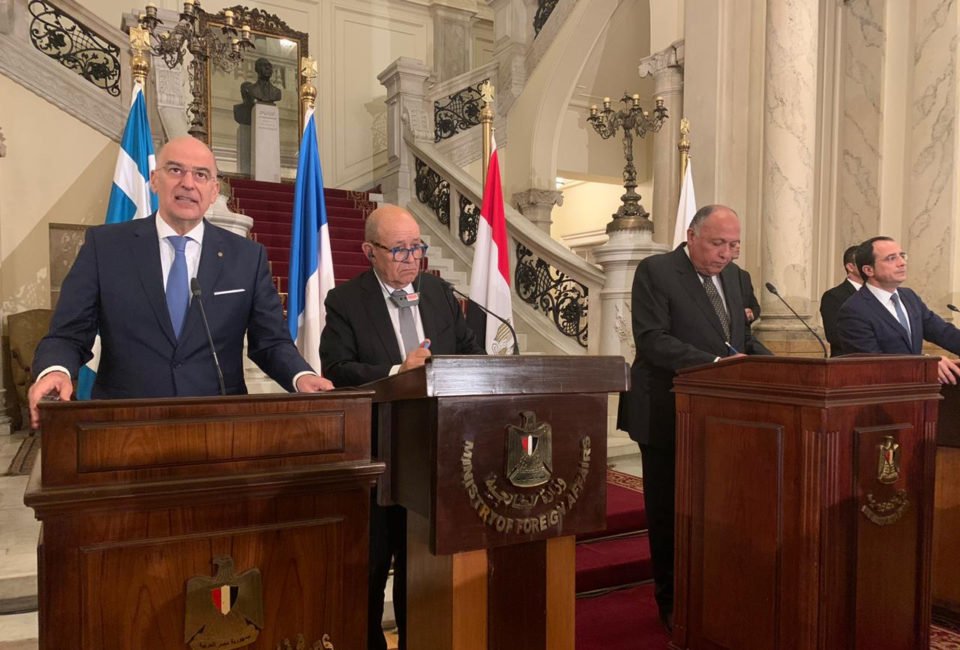 The foreign ministers of France, Egypt, Greece and Cyprus on Wednesday stressed their opposition to Turkey’s decision on troop deployment to Libya, and to two maritime deals Ankara struck with the African country’s government in November, which Greece and Cyprus see as a threat to their natural gas drilling rights.

In a joint communique following a meeting in Cairo, which was attended by Italy as an observer, the ministers rejected the maritime deals as void and as a destabilising factor in the region.

The ministers “deemed the signing of the memorandums of understanding in November between Turkey and Mr. Fayez Sarraj, the President of the Presidency Council of Libya to be a violation of relevant United Nations Security Council resolutions and international law.

“These memorandums have further undermined regional stability, and are both considered null and void,” the communique said.

It added: “the Turkey-Libya Memorandum of Understanding purporting to delimit maritime jurisdictions in the Mediterranean Sea infringes upon the sovereign rights of third States, does not comply with the Law of the Sea and cannot produce any legal consequences.”

According to the communique, the ministers “deemed the security memorandum and any decision to send troops to Libya to be a serious violation of the United Nations Security Council resolution 2259 and other relevant United Nations Security Council resolutions, and a threat to regional security and stability, and called for an immediate de-escalation.

The four ministers agreed to continue their consultations and decided that their next meeting will be held in Crete at a date that will be agreed later.

Cypriot Foreign Minister Nicos Christodoulides said the main objective of the meeting was to create conditions of security and cooperation in the region without excluding anyone.

“Destabilisation that at the end of the day does not benefit anyone.”

Greek Foreign Minister Nicos Dendias noted that the deployment of troops and weapons systems in Libya was a serious breach of the UN Security Council, which served to undermine the international community’s efforts to achieve a political solution.

“The two so-called deals constitute a threat to regional peace and stability and feed a dangerous escalation of the conflict,” Dendias said.

Plenum to vote on bill allowing police to use phone surveillance