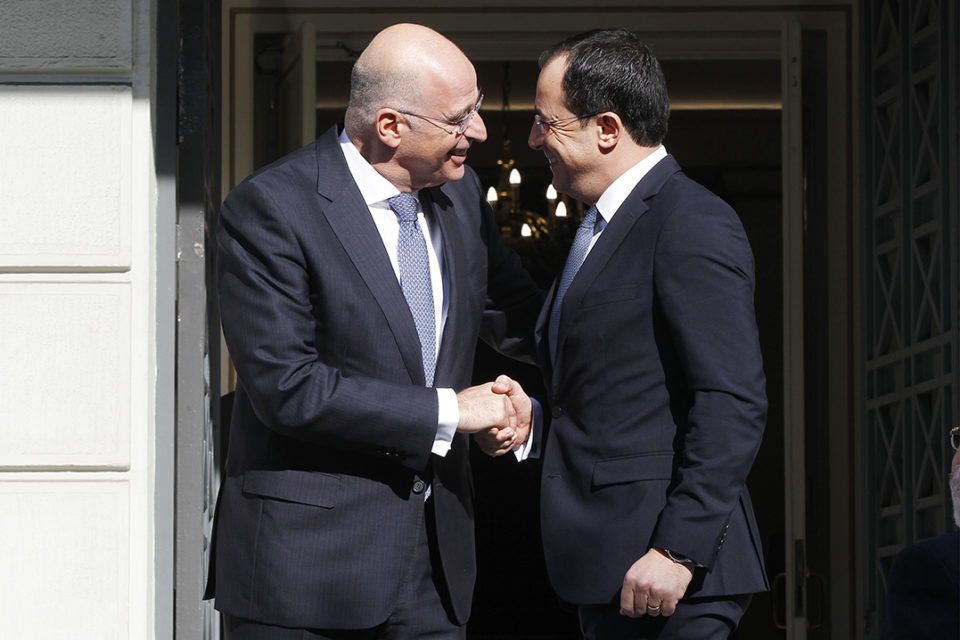 THE foreign ministers of Cyprus and Greece on Monday held talks in Athens revolving around Turkey’s recent actions in the eastern Mediterranean and in particular Ankara’s maritime accord with Tripoli.

Nicos Christodoulides and his Greek counterpart Nikos Dendias also signed a memorandum of understanding between their respective ministries for policy consultations and technical cooperation.

Speaking to the press following the talks with Dendias, Christodoulides said they discussed the latest developments in the region as well as coordinating actions between their two nations in an increasingly fluid environment “where certain states believe they can violate fundamental tenets of international law or the sovereign rights of other states.”

The two diplomats reviewed the state of play on the Cyprus issue, with Christodoulides stressing Nicosia is ready to resume peace talks as soon as possible. He expressed the wish that Ankara would respond, adding that a settlement on Cyprus will have a catalyzing effect both on Greek-Turkish relations as well as on the region more broadly.

Asked whether Nicosia is satisfied from the EU’s stance so far vis a vis Turkey’s actions in the Mediterranean, the Cypriot foreign minister demurred somewhat.

“It is especially important that the EU send the right and necessary messages to Turkey,” he remarked.

For his part, Dendias said he and Christodoulides discussed Turkey’s illegal and unlawful actions which “are not restricted to Cyprus’ Exclusive Economic Zone.”

The talks also focused on the situation in Libya – following the ceasefire there – and Iraq.

“Alleged conspiracies being concocted to isolate Turkey in the sea, are not convincing,” Dendias added, alluding to Ankara’s claim that Cyprus, Greece and others are seeking to carve up among them the eastern Mediterranean’s maritime jurisdictions and thus access to offshore hydrocarbons.

Dendias underlined that the initiatives undertaken by Athens and Nicosia, as well as their partnerships with other regional counties, are not directed against any one nation.

He reiterated that the two memoranda of understanding recently struck between Turkey and Libya – one delimiting their maritime jurisdictions, the other on security cooperation – are null and void.

“Our engagement [with Nicosia] is precisely aimed at generating a recognition that those two agreements are invalid.”

Responding to a question concerning an Iranian demarche lodged to the Greek government, Dendias said he would speak about this on the phone on Tuesday with his Iranian counterpart Javad Zarif.

Over the weekend, Dendias admitted in a television interview that Iran had lodged a demarche to Greece over comments made by the Greek prime minister, during the latter’s visit to the United States last week, regarding the United States’ assassination of an Iranian general.

Asked about Greece’s view on the killing of Major General Qassem Soleimani, Mitsotakis had said:

“We are allies with the US, so we stand by our allies through difficult times. I understand this particular decision was taken by taking into consideration what is the US national interest and we stand by that decision.”

Joker leads the Oscar nominations with 11

Party leaders continue to bicker over need for local reforms