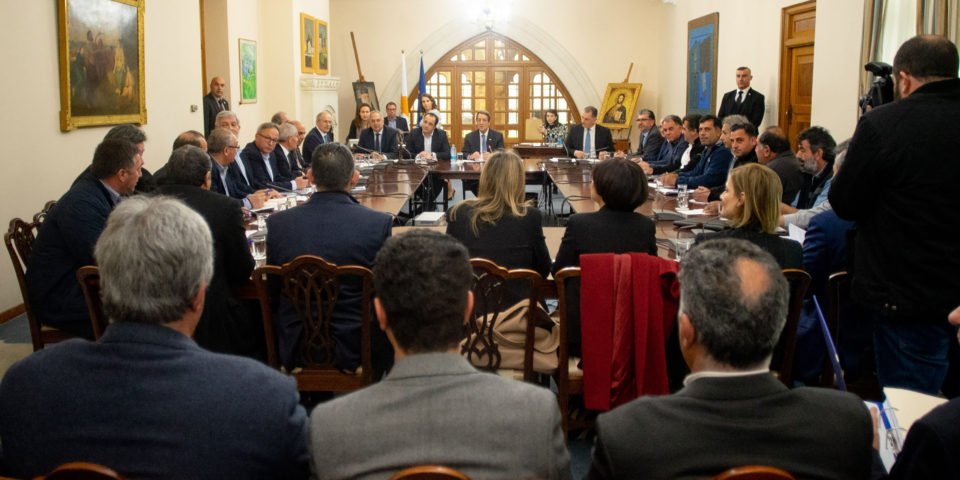 The meeting at the presidential palace to discuss the halloumi PDO

Registering halloumi cheese as an EU Protected Designation of Origin (PDO) product depended on the European Commission and its proposals and not the Cypriot side, Agriculture Minister Costas Kadis said on Wednesday, as the government was preparing to embark on a new effort to overcome the obstacles, technical and political.

“Certain aspects in these proposals did not satisfy us,” Kadis said after a broad meeting at the presidential palace chaired by President Nicos Anastasiades.

The minister said two Commission directorates had different approaches on the matter, which related to the island’s political problem.

“That is why we said everything must be put on the table, to see the matter with the European Commission comprehensively, so as to define the next steps,” he said. “I think everyone agrees that the things need to be clarified and ways to complete the registration process must be sought.”

Greek and Turkish Cypriots – who also produce the cheese under the name hellim – supposedly came to an understanding in 2015, agreeing to appoint accredited body Bureau Veritas as the organisation in charge of quality control and its reports to be sent to authorities of the Republic and the Commission.

“A proposal to modify the Green Line Regulation, in order to facilitate trade, will be adopted by the Commission on the same day of the publication in the Official Journal of the formal application to get the registration of halloumi/hellim as a protected designation of origin on the basis of Regulation (EU) No 1151/2012,” it was announced at the time.

The government said the agreement foresaw the export of hellim to European markets through ports in the Republic, but Turkish Cypriots claim that was not the understanding and they want to be able to export their product through the north.

Wednesday’s meeting came in the wake of the re-registration of the halloumi trademark in the UK after it was lost due to a blunder by trade ministry officials.

The company is owned by the cow farmers association who have always opposed the formula included in the PDO application.

According to that, halloumi must contain at least 51 per cent sheep’s and goats’ milk, in line with the traditional recipe.

Kadis said there was no question of changing the application before the cheese was registered.

“Any such discussion will be made later and with very careful steps,” he said.

Documenting and honouring The Doors