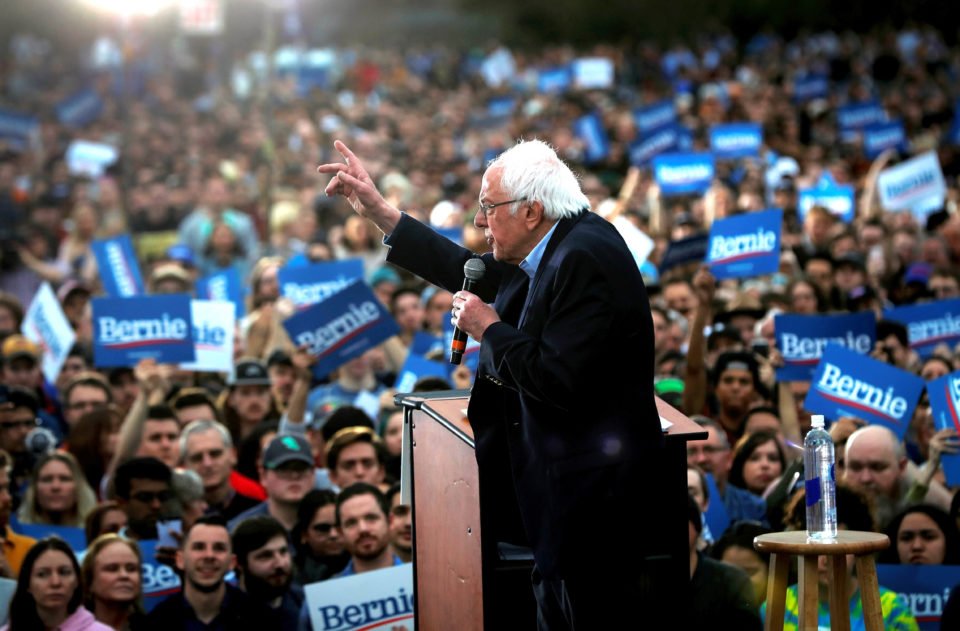 Bernie Sanders‘ Democratic presidential rivals warn that nominating the self-described democratic socialist will ensure President Donald Trump’s re-election, but a growing number of the party’s voters see the senator as their best chance of winning in November.

Sanders‘ dominating performance in last week’s Nevada caucuses, powered by growing support across age, race and ideology, has set off alarm bells among Democratic Party officials who believe putting the progressive stalwart at the top of the ticket will harm the party’s chances up and down the ballot.

Sanders‘ electability was a prime topic at Tuesday’s Democratic presidential debate in South Carolina. Rivals contended his ambitious liberal policy ideas, such as Medicare for All, which would replace private health insurance, would be an electoral “catastrophe,” costing the party the White House and control of Congress.

But the latest Reuters/Ipsos polling shows Sanders‘ rising momentum in the race – a near win in Iowa, a narrow victory in New Hampshire and a decisive win in Nevada – has given him more credibility with Democratic voters.

Some 26 per cent of Democrats and independents polled February 17-25 said they believed Sanders was the strongest Democrat in a head-to-head match-up with Trump, compared with 20 per cent who picked billionaire businessman Michael Bloomberg and 17 per cent who named former Vice President Joe Biden.

That was a big change from a month earlier, when 27 per cent of respondents gave Biden the edge, and just 17 per cent thought Sanders could beat Trump.

In the Nevada caucuses, Sanders won the support of a majority of Latino voters and led among most demographic groups broken out by gender, income and political leanings in Nevada. Notable exceptions were those aged 65 years and older, as well as black voters, more of whom supported Biden.

That too could be changing. The same Reuters/Ipsos polling showed that Sanders had overtaken Biden in support among black voters nationally for the first time.

Saturday’s South Carolina primary will be the first major test of Sanders‘ appeal among African-American voters, who represent about 60 per cent of that state’s Democratic electorate.

Three days later, 14 states will cast ballots on Super Tuesday, when Sanders could build an overwhelming advantage if he captures the lion’s share of the available delegates.

His path has been smoothed by the fragmentation among the moderate candidates. Biden, former South Bend, Indiana, Mayor Pete Buttigieg and Senator Amy Klobuchar – all of whom say Sanders‘ policies are too radical to win in November, have each recorded at least one top-three finish thus far, while Bloomberg’s name will appear on ballots for the first time on Super Tuesday.

Sanders argues the enthusiasm powering his campaign will lead to record turnout in November, particularly among young and infrequent voters, making up for any deficiency among swing voters or Republicans.

“A large voter turnout would mean that down-ballot Democrats will … do better than they have in the past,” Sanders told Reuters on Saturday in El Paso, Texas. “Our campaign is the campaign to do that: We have the energy, we have the excitement, we have the grassroots movement.”

At Tuesday’s debate, he said the biggest misconception about him, “and you’re hearing it here tonight, is that the ideas I’m talking about are radical.”

“They’re not. In one form or another, they exist in countries all over the world,” he added. “Healthcare is a human right. We have the necessity, the moral imperative, to address the existential threat of climate change. Other countries are doing that.”

The results in Iowa, New Hampshire and Nevada have not provided evidence of a massive turnout surge, but Sanders‘ fortunes have improved with each succeeding state contest.

“If you want to win in red and purple places, the most important thing you need is people who like you or who are willing to fight for you,” Senator Kirsten Gillibrand, who ended her own presidential bid last year, told MSNBC on Tuesday.

“You need passion, and what Bernie showed so far is that he’s got a lot of passion in his campaign.”

After gaining a majority in the US House of Representatives in 2018, dozens of Democrats will be defending seats in Republican-leaning areas. In recent weeks, several moderate Democrats openly fretted that Sanders at the top of the ticket would risk flipping those seats.

“I hear from constituents that they are afraid they are going to have a make a choice between a self-described socialist and an aspiring dictator,” said US Representative Stephanie Murphy of Florida, co-chair of the congressional Blue Dog Coalition of moderate Democrats, referring to Sanders and Trump.

“That’s not a choice any American should make.”

Polling released by Bloomberg’s campaign on Tuesday showed voters in 42 of the most vulnerable House Democrats’ districts preferring Trump to Sanders.

Guy Cecil, chairman of Democratic super PAC Priorities USA, said Sanders “has some capacity to expand the Democratic vote among younger voters,” adding: “At the same time, he’ll need to make sure he’s doing more to reach out, in particular to those women – suburban women – that were really the benchmark of us taking over the House in 2018.”

Cameron Brand, 24, a patient care adviser at a medicinal dispensary in Plymouth, New Hampshire, said he knew people who voted for Trump in 2016 because they disliked mainstream Democrats, but would vote for Sanders.

“Although he is being labeled as this radical leftist or whatever, he actually does have a lot of policies that the majority of Americans agree on that cross party lines,” Brand said.

“He tells it like it is,” Brand said of Sanders. “He tells the truth.”

Americans urged to wear masks outside as coronavirus pandemic worsens