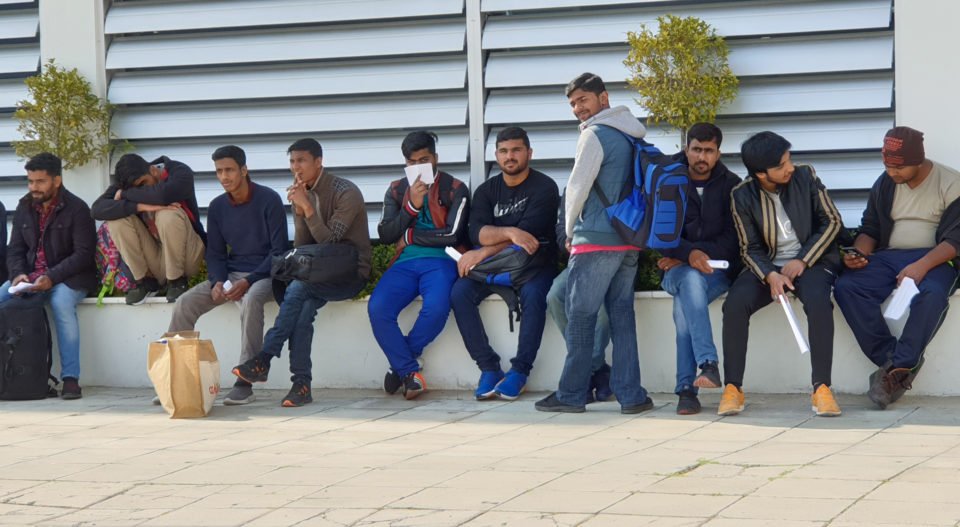 By Jean Christou and Nick Theodoulou

President Nicos Anastasiades on Tuesday said the flow of migrants from Turkey was very concerning and suggested it could be a deliberate attempt to alter the demographic character of Cyprus.

The comment came just before Interior Minister Nicos Nouris revealed that over the past three days over 220 irregular migrants arrived in Cyprus, excluding the 101 that arrived on Tuesday afternoon off Cape Greco.

Nouris said around 150 of the newly-arrived migrants applied on Tuesday morning for asylum. But he said Cyprus has reached its limits in terms of economic migrants, and their vast number was taking away much-needed resources from refugees from war-torn countries who have arrived on the island.

Anastasiades made his comment about Turkey after a lengthy conversation with Greek Prime Minister Kyriakos Mitsotakis and following a meeting he chaired with Nouris and other ministers on the crisis.

Earlier in the day, government spokesman Kyriakos Kousios told reporters that there were 100 people waiting along the Green Line to seek asylum but did not pinpoint where along the 180km ceasefire line.

Neither Unficyp nor the UNHCR in Cyprus could confirm his statement but the latter did confirm that around 130 people had applied for asylum on Tuesday.

“We have spoken to the immigration authorities and were told that 130 people have applied for asylum today [Tuesday],” Emilia Strovolidou from the UNHCR told the Cyprus Mail.

Anastasiades, asked whether he suspected an organised effort by Turkey to send migrants to Cyprus, said: “With all that is going on in Greece, and what we have seen until now – with Cyprus as the highest per capita country for asylum seekers – it is definitely worrying.

“We acknowledge the human suffering,” he added. “But at the same time, we must also take measures against efforts to alter the demographic character of our country.”

Asked if he definitely saw an organised plan behind the flow of migrants, the president said: “I do not need to comment on what is recorded with the thousands who are encouraged by Turkey at the Greek or Bulgarian borders”. Cyprus did say on Tuesday it would aid Greece in any way it could, either through the EU’s external border agency Frontex or through other means.

“We are in constant communication with the EU and Frontex and are calling on the EU for new measures in regards to refugees and economic migrants,” said Kousios. “If this is not handled as a European issue, then I do wonder where we will end up. It must be understood that Greece, Italy, Malta and Cyprus are the borders of the EU. The migratory flow will increase due to Turkey’s decisions, and we must expect a large influx.”

He said there had been a 320 per cent increase in the flow of refugees to Cyprus over the last two years.

A journalist present raised the question as to whether all those requesting asylum are refugees, and Kousios replied that “the reality is that there are very large number of economic migrants.”

He said of the 100-plus requesting asylum on Tuesday, many were from African and Asian countries.

This was reiterated later by Nouris who said Cyprus could no longer cope because it does not have the infrastructure to accommodate so many “and that is what the EU and the international community must understand”.

He said the aim is to return only economic migrants to their countries of origin or the “safe countries” from which they arrived. “We are not going to return anybody who will be sent to a country where his life is in danger,” he added.

He said that while the other frontline countries in terms of reception of immigrants, including Greece, had seen their migratory flow increase but was still below 1 per cent of the total population, in Cyprus this per centage had now reached 3.8.

Nouris said there were around 12,000 people who have already been offered international protection in Cyprus, 17,000 pending asylum applications and 4,000 pending appeals. “All together the number is approaching 32,000,” he said.

Cyprus would make its position clear, along with Greece, during the upcoming EU Home Affairs Council meeting.

“The aim and purpose is to speed up the examination of asylum applications and to speed up and expedite the return procedures, so that our country can reduce the number of economic migrants and to offer what we can to those who really need it,” the minister said.

“Today the numbers are prohibitive for us to implement a proper policy and that is why a very specific strategy proposal is being prepared, which will be put before the president in additional detail and announced very soon”.

He also said in view of the situation with Greece, existing infrastructure was being strengthened but the issue was much broader than that.

“A huge problem we want to highlight and raise within the broader policy issues is that the EU itself has to implement a pan-European asylum policy in which the EU will play a role in negotiations with secure third countries to which immigrants must return,” he said. The minister has already invited the relevant EU senior officials to visit Cyprus to see for themselves.

Asked if Cyprus had the right under international norms to stop immigrants from entering through the north if they present themselves after crossing the buffer zone, Nouris said “Cyprus certainly has the right to prevent access but we should be aware, and we are aware, of the fact that there are international bodies and legislation, which also gives immigrants specific rights.”

However, he said that while Cyprus, with a population of only 850,000, can withstand a certain number of immigrants, and does so, there is only a certain number that it can accommodate, and those limits had been reached.