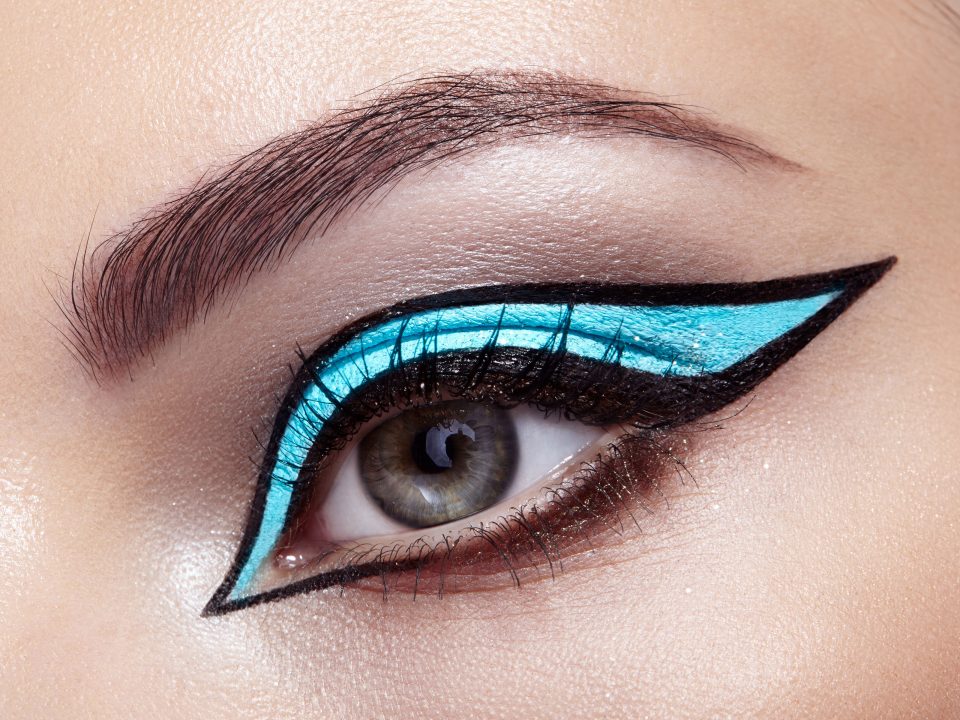 This season, some of the boldest make-up looks involve playing around with geometric shapes.

Although it may sound daunting – or like an ill-advised throwback to the Eighties – it’s a far cooler and more wearable look than you might initially think.

At one end of the spectrum were maximalist looks. For instance, at Matty Bovan, spiky lines accented models’ eyes alongside odd dashes of silver. While at the other, more low-key, end of things, the Victoria Beckham models had a thin line delicately drawn over the eyelid, and at Jeremy Scott, long cat-eyes with pops of colour ruled.

It’s definitely a step-up from the normal swoop of liquid eyeliner we’re used to, and can be a fun new look to experiment with.

Lead make-up artist at Stila, Sascha Jackson loves the geometric trend, “because it complements the fashion without overpowering the look, and it’s a great way to introduce flashes of colour without being too bold.

“For regular day-to-day make-up looks, taking elements of a geometric look but toning it down is a great way to experiment, get creative and explore different colours that you may not be used to wearing.”

Here’s how to get the graphic look…

You don’t need to buy lots of new products to pull off the geometric trend – at its core are thin, black lines. All you need is a decent black eyeliner with a precise nib – and chances are, you already have one of those in your beauty bag.

To begin, Jackson recommends playing around with negative space, so leaving parts of your eye unpainted for additional impact. “Start by doing your usual eyeliner, but then missing spaces out, then starting it again,” she says.

“The skin showing on your eyelid creates the negative space illusion. If you want it to be super edgy, you can use the eyeliner and draw a line in the same shape as the curve of your upper lash line – but in the space between your socket and your brow,” – as seen at Victoria Beckham, which demonstrated how elegant and subtle the graphic trend can be.

For an update on classic winged eyeliner, either take inspiration from the Jeremy Scott show and draw the wing out super long and thin, or, Jackson says: “Instead of filling out the wing so it’s blocked black, just draw the outline of what you want the finished look to be.”

And remember to experiment. “I especially love adding a pop of colour line in an arch above the socket, it’s a really cool take on the traditional liquid liner look,” she adds, suggesting using a slick of bright purple to really stand out.

Experimenting with eyeliner is an easy way to get in on the trend, but if you really want to level up, it’s all about big splashes of colour.

Jackson suggests trying “block placement eyeshadows in bright colours which complement each other. For example, I love bright cobalt blue with turquoise, and a hot pink, or orange with blue.

“Pop the colours where you naturally wouldn’t,” adds Jackson – so try placing blocks of varying shades around the eyelid and under the eye, “then perhaps finish with a flick in a different colour.”

Even if you haven’t put on a slick of mascara for weeks, taking some time to play around with a new look is a great way to pass the time and make you feel good.

For Jackson, these graphic styles are all about “being out of the ordinary, so don’t be sucked into playing it safe.”

The great thing about make-up is, it’s not like a haircut gone wrong – if you don’t like the result, you can wipe it off and start again. So why not take a risk?

Japan would ‘scrap’ Olympics if not held next year