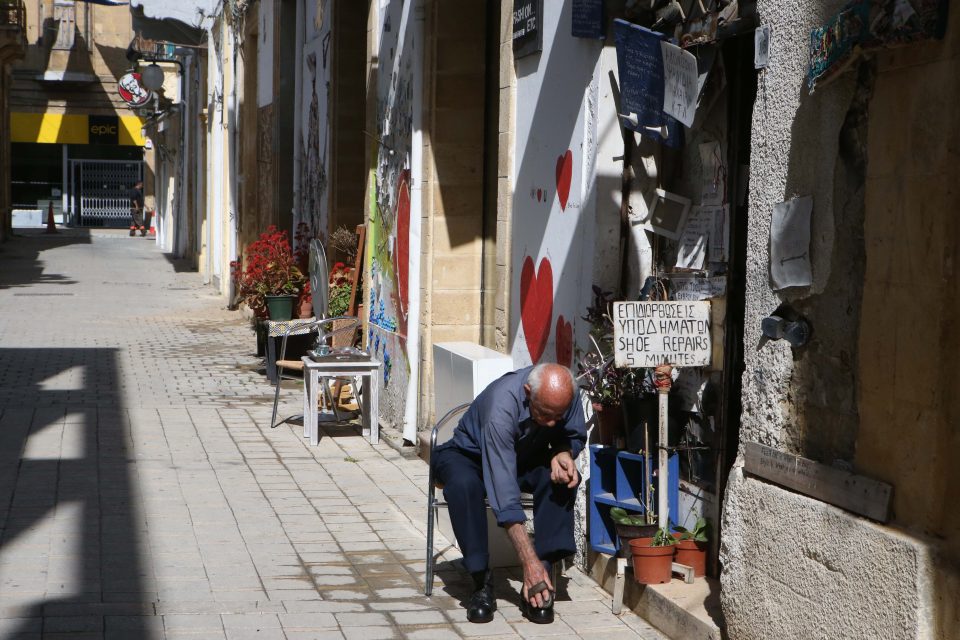 Doubt, rent worries and uncertainty were the words on the lips of Nicosia shop owners as a staggered reopening began islandwide on Monday.

A common concern amongst the shop owners in and around Ledra Street was that many people will not venture downtown but instead stick to their neighbourhoods to buy what they need.

“I opened today but there’s no way there will be a customer. People came to the cafes, had a walk around and might buy a pair of shoes afterwards, but what now?” asked one shop owner.

Upbeat pop music rang out from a clothes shop on Ledra Street as a couple lazily licked ice cream on a bench outside.

In the smaller shops, down the side streets, radios could be heard broadcasting the latest coronavirus updates.

“People will be more restrained with their money, there will be uncertainty over jobs,” Takis, 72, told the Cyprus Mail.

He also said that he does not expect a single customer.

“Fortunately, I didn’t place any orders before [the lockdown],” the shoe-shop owner said.

“The person who handles my deliveries came over today and I told him ‘what can I do?’, maybe next week I’ll be closed again.”

Marios, an optician, appeared unsettled that there were not as many people as he expected and most shops remained closed.

“I think many haven’t opened so that they don’t have to pay the full rent,” he said.

“The money is running out and the bills are piling up,” he sighed, pointing to a bundle of unpaid bills.

As for the lack of people, he said: “You can see from one end of Ledra all the way to the other, that says it all.”

He also said that shops towards the end of Ledra would be worst affected due to the checkpoints remaining closed.

Further up Ledra street, towards fenced-off Eleftheria Square, the atmosphere was less glum but uncertainty prevailed.

“I don’t feel anything. However I felt before, it’s the same now. The only difference? I put on a mask and gloves,” said Christoforos – in his 30s – who runs a small clothes shop.

“The foreign nationals don’t seem to know what’s happening. Has no one told them or what? No gloves, no masks – nothing,” he said.

“They want to all come in as a group and don’t even look at the sign which says one by one.”

Changing tone, he said that day by day things will get better. Optimistically, he said that the public will become more aware and learn how to deal with the new situation.

He also said that people should get beyond party politics, of “left or right”.

“It’s Anastasiades now? Ok, let’s get on with it. He took some measures, let’s follow them through. If it was someone else, on the left, then we would follow him. Let’s help him to help us.”

A two-minute walk from the top of Ledra Street is Laiki Gitonia, arguably the area set to be worst hit by the lockdown.

Overwhelmingly dependent on tourists for revenue, the picture is bleak. And yet, some of the souvenir shops were open.

“How do we feel? Lonely, uncertain and owing rent. For us eighty per cent of our customers are tourists,” said a woman arranging shelves.

“The countries from which we see the most tourism are feeling a lot of pain right now. England, Italy, France and Russia. We may have Greeks but they’re in the same position as us,” she said.

“But what can I do, staying at home is worse. It’s better to work.”

The friendly woman was restocking and rearranging the shop, she explained, as there had been a break in nearby. She was advised by police to store her valuables somewhere safe.

As the morning dragged on towards afternoon, workers dusted off their goods and there was a certain post-hibernation feel to the previously bustling hub of activity.

“We don’t know if people will be in the mood to buy stuff like bags yet, but hopefully our discounts can help out,” said Monica, who runs a bag and suitcase shop.

“We’re hoping for the best. We’re tidying out the shop and just preparing and waiting to see how the public reacts.”