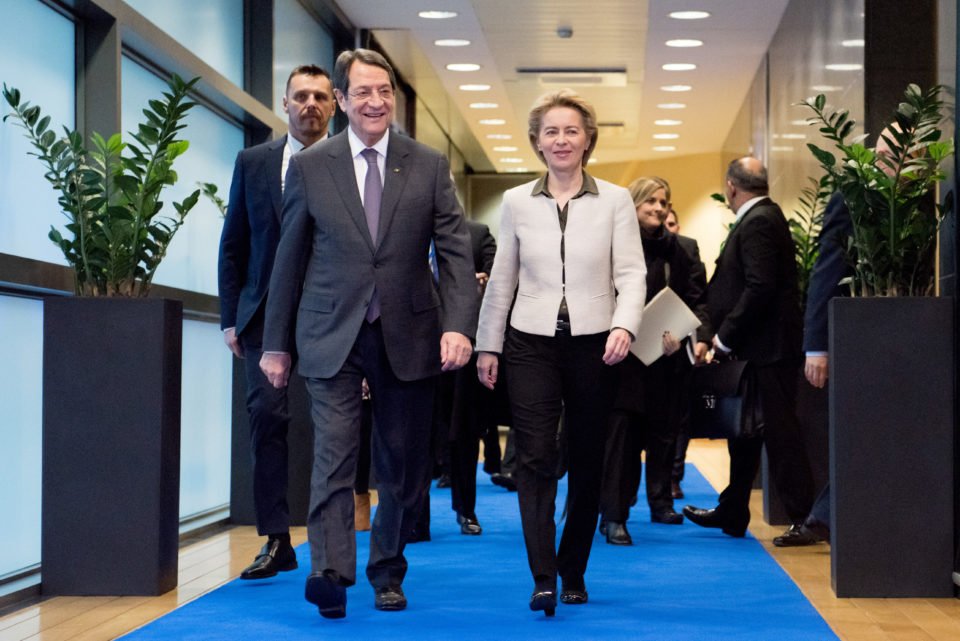 President Nicos Anastasiades will hold late on Sunday afternoon, a telephone conversation with the President of the European Commission Ursula von der Leyen in the context of his contacts with heads of European institutions.

According to a written statement by government spokesman Kyriakos Kousios, issues related to the efforts to deal with the consequences of the coronavirus pandemic are expected to be raised during their telephone conversation. Anastasiades will also refer to the situation in Cyprus in dealing successfully with the pandemic.

The president will also raise the issues arising in connection with Turkey’s ongoing illegal actions in Cyprus’ exclusive economic zone (EEZ), and, in the eastern Mediterranean region.

Τhe multi-annual financial framework and the recovery plan will also be discussed during Anastasiades’ telephone communication with the President of the European Commission.

Turkish drill ship Yavuz arrived last April in Cyprus’ EEZ after Ankara announced another attempt to drill in blocks licensed by the Republic of Cyprus to European energy companies. This is the sixth time Turkey attempts to drill within the EEZ and continental shelf of the Republic of Cyprus, this time in an area that covers part of exploration blocks 6 and 7, which have been licensed to ENI and Total.

In a statement on May 15, EU Foreign Ministers deplored the fact that Turkey has not yet responded to EU calls to cease such activities and reiterated their call on Ankara to show restraint, refrain from such actions, and respect the sovereignty and sovereign rights of Cyprus, in accordance with international law. They also reaffirmed previous Council and European Council conclusions, notably those of June 2019 and October 2019 on Turkey’s continued illegal activities in the eastern Mediterranean.